The greatest band in the world in November, 2015 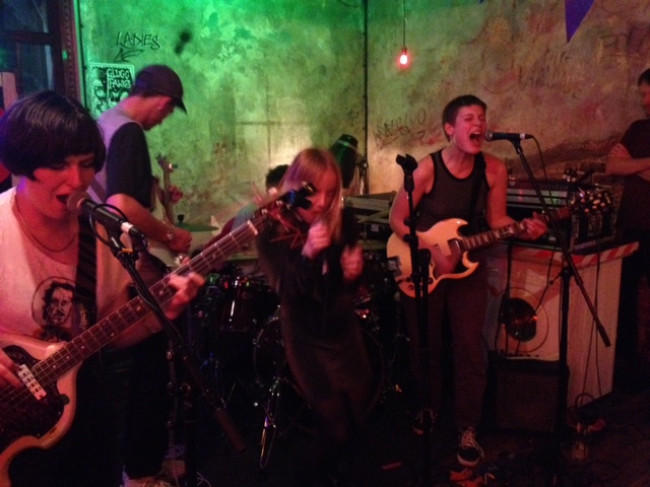 I am on stage performing as The Legend! (not Everett True) and people are laughing.  I am a funny man, that’s what (some) people say.  People laughed at Nina Simone too.  (Read that sentence again, and wince.)  Nervousness, coupled with just not knowing how to react.  I know I intimidate, that I am a local embarrassment, a failure coming to term with a lifetime of failures.  Laughter covers many fault lines.

Doubtless, people laugh at Porridge Radio (not with them, because Dana is not laughing, not really).  There is something about Porridge Radio that can attract mirth  in the emotionally stunted.  “I’m sorry that I told you that I think you’re boring,” she sings in misery and laughter on the identity-chasing break-up song ‘Danish Pastry Lyrics’, a song googleplex times more intelligent and invigorating and moving and funny than your entire life, frankly.  On tape, Porridge Radio are all intense this and intense that: acoustic and frail and fragile and presumably suffering from the same sore bear-head that many sore bears have suffered from already.  On tape – brashly and sadly (not in the pejorative use) and female – they remind me of a traumatised Sentridoh (Porridge Radio actually cover ‘Gimme Indie Rock’), so beautiful and fresh and unrepentant.  Songs about loneliness and hope and scary clowns encountered one too many times.  Dana uses repetition and silence like she understands the concepts.  So fragile, so worried, so strong.  So beautiful.

Live, Porridge Radio (as a band, as a loose-knit collective of friends and dreamers and misfits) are having way too much fun to sound like that.  Instead, they mutate into a full-on rock Sebadoh circa 1998 (I do not want to labour this point).  More to the point, considering where I saw them first, they remind me and the fellow standing next to me, gently swaying in the mood and maladies, of Blank Realm: the way there is a warped, woozy, drunken beat backing them, the way Dana stretches out her vowels and consonants and whatever else tricksy devices she uses.  Live, this is dance music for fucking the world to, dislocated delirium to dangerously dig around the past and present in.  The music in the studio is Marine Girls special: the music on stage is like a full-throttle cunt-out Television or Happy Mondays.

I think perhaps Dana and colleagues – and man, a shout-out to that lady cutting a rug and smiling for no apparent reason beyond the fact she clearly loves to cut a rug and smile; and man, a shout-out to the psychedelic guitarist; and man, a shout-out to that astonishing bass-player and the loose-limbed, too-awesome drum god; and man, especially a shout-out to Dana levelling all her colleagues’ antics and abilities with a tough-eyed vulnerable stare, a shiver of stardust on guitar – I think perhaps that they may be playing a trick on me.  I mean, up the road are The Ethical Debating Society and pals, fermenting feminist punk righteousness and here is this band, this inexplicable punctuation mark of a band ploughing their furrow and sounding all hopeless and melodically stunning on tape, out-feministing and out-punking EVERYONE.  I have not seen such intensity and honed shouting on stage since… god, I do not know… Ian Mackaye perhaps (and I never even liked Fugazi).

And she/they is/are having fun.

It occurs to me that perhaps Dana changed the entire tone of the set seconds after seeing my miserable performance and then I slap myself across the face for being so presumptuous.  But I reckon she has the ability to do that.

Such Mary Poppins magic.  Such an embarrassment of embarrassments. A cosmic love-bomb.  On no level do Porridge Radio disappoint.  On every level, they exceed any pallid expectation and drivel imagination I may have had about them before tonight.  I had only seen 30 seconds of their music before.  (I lied about the extra 10 seconds.)  Tonight was like being let in on the greatest secret in the world, so great because there is no way – NO FUCKING WAY – that anything I type comes close to capturing the essence of Porridge Radio, and they will probably have mutated and changelinged and turned into something even more separate and other in the time it takes me to type this thought.

If only this was Adele.

If only this was Sam Smith.

If only this was David Cameron.

In fact, fuck you. I am not even going to whisper their name from now on.

The greatest band in the world in November, 2015. For so, so many reasons.

6 Responses to The greatest band in the world in November, 2015