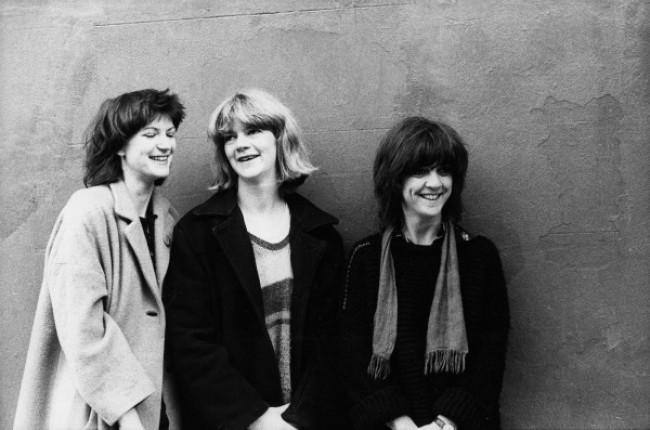 This was inspired by a thread on David Quantick’s Facebook page, wherein he asked friends to nominate their favourite three Wah! songs. A worthy cause, I felt. Surely it could be expanded to other great bands’ back catalogues?

The obvious place to start was with The Raincoats.

Here are the results, in order (just typing in the song titles gives me an astonishing amount of pleasure). I have plenty of sympathy for those friends who stated it was an almost impossible task, separating out their favourites.

In case you’re wondering, my favourite Raincoats song for today – and back when they played live in the early 80s – is ‘No Looking’. Unless it isn’t.

And the Raincoats song that The Legend! And His Swinging Soul Sisters used to cover with our atonal three-part harmonies was ‘In Love’. The guitar parts and time signatures on their other songs confused the hell out of us. As they did on ‘In Love’.

1. No Side To Fall In
First track on the 1979 debut album The Raincoats, later heralded the world over when everyone realised how fucking cool it could make them – which always struck me as kind of weird considering how vulnerable and human and extra/ordinary their music is

Its brevity is almost brutal, as is the plaintive call in the voices. And then it all goes mental and blows itself out in a squall of blasted, plucked, draining energy, before returning to the plaintive siren call. There are more ideas and trails to follow within its 1.52 of almost alien texture and rhythms – certainly The Raincoats still sound like a band apart, even 35 years on – then within the entire oeuvre of ‘Britpop’ between 1994 and 1998.

As Johnny Rotten (a man occasionally possessed of immaculate sound sense) once put it:

The Raincoats offered a completely different way of doing things, as did X-Ray Spex and all the books about punk have failed to realise that these women were involved for no other reason than that they were good and original.

As The Raincoats themselves once put it:

The basic theme in rock’n’roll is what goes on between men and women…Rock’n’roll is based on black music. And it’s based in the exclusion of women and the ghettoization of blacks. Which is why we want to put a bit of distance between what we do and the rock’n’roll tradition.

2. Fairytale In A Supermarket
Debut single from 1979, not included on the first album until 1993

This one song – by itself, by its own wistful, screeching, carolling self – heralded a whole new way of thinking, a whole new life. Again, it’s the way the song shifts a gear through determination alone, that rambunctious righteous thrill of drums and roll of percussion that happens around the minute-mark. That, coupled with this lovable, liveable harmonies and violin (man, such a boost for those of us who ended up playing such a fiercely uncool instrument at school), and even the odd nod to Eastern culture towards the end. How the hell is it possible to shout so atonal and yet to tunefully?

3. Lola
Final track, side one on the 1979 album The Raincoats – a Kinks cover, like you didn’t know

Complete gender inversion on a song that already challenged people’s preconceptions. Such a glorious clattering celebratory mess. Such enthusiasm and delight at the sheer act of just being up on stage singing and playing. Such an imaginative way around a harmony. How the hell the version below – recorded in Brooklyn in 2009 with Viv Albertine – manages to retain everything that was so glorious and breath-inducing about the original, I don’t know. But it does. It really does. Maybe it’s because they still sound so thrilled at being up there. I wish that more could, I really do…

4. The Void
Opening track, side two on the 1979 album The Raincoats

I’d forgotten Courtney had covered this, back when she meant something. It’s a fairly forgettable, oddly shy version – like a fan-girl, hand-on-heart incapable of doing justice to her heroines (hers? really? I still doubt that) but wanting to be seen to try nonetheless. There are about 30 links to various Hole versions of the song on YouTube, NONE to The Raincoats… except this catch-all (below). In many ways, this howl of loneliness and despair, is my favourite moment from the album – it’s certainly the only one that’s directly inspired a song of my own, often revisited. It doesn’t have the charm or melody or raucous clatter of many of the others – it’s too pent-up, too emotional for that – but man. It cuts deep. It really does.

The last time for a while I connected with The Raincoats, these two songs. Wonderfully realised.

6. No Looking
Final song, side two on the 1979 debut album The Raincoats

Oh my god. OH MY GOD! OHMIGOD OHMIGOD OHMIGOD! Don’t let it stop playing. Please don’t ever – EVER – let it stop playing. Lyrically, melodically, rhythmically, dynamically, tension-wise, enthusiasm-wise, excitement-wise, wonderment-wise… the whole world would blur and go fucking crazy when they played this live,  me and Ian dancing harder than the entire world combined. I never want this to stop.

7. Only Loved At Night
Third song in on that awesome second album from 1981, Odyshape

8. In Love
First track on the B-side of the first single; fourth track, side two on 1979 debut album The Raincoats

More punk than you’ll ever be, punk. (The fact that this is also one the greatest falling-in-love songs ever, period, is almost incidental.)

9. Shouting Out Loud
Opening track on that awesome second album from 1981, Odyshape

Features Ingrid Weiss on drums (mother of the most excellent Kitty, Daisy & Lewis). I performed live in front of her one time at a Student Union in 1984 or thereabouts. We covered ‘Number One Enemy’ by The Slits. The fact a ‘Raincoat’ was there near freaked me out more than anything. I used to claim this was my Favourite Album Ever mainly because of this song alone.

10. Black And White
Fourth song, side one on the 1979 debut album The Raincoats

Also loved (rather, voted for):
Adventures Close To Home
Go Away
Off Duty Trip
I Saw A Hill
Running Away