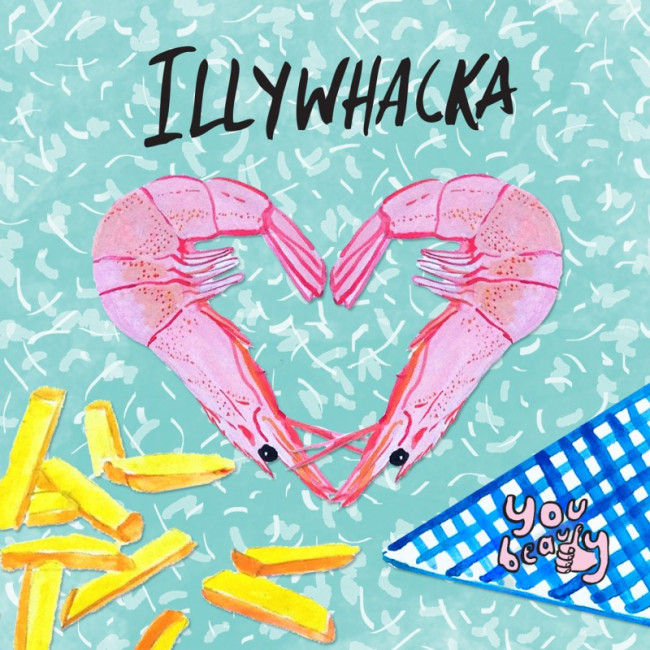 As someone who broadcasts opinions (not for a living, tho), I worry when a band strikes my fancy and I can’t explain why. By all accounts, You Beauty shouldn’t charm me as they do – they’re the usual four-man rock band outfit from Sydney, albeit with slick new wave haircuts and humming basslines and banshee riffs.

But what’s curious about these guys is that they tell stories. Jersey Flegg, You Beauty’s first album, was about a fictional rugby star who falls in love for a girl and starts to suffer on the field. And yeah, it’s kind of high school special-ish, and the music stagnated in a certain Fixx-meets-Pavement mode. But you stick your headphones on and you busy yourself with something, and sooner or later you find yourself checking in on the poor guy without even realizing how concerned you are.

So it took me a while to catch the thread of this new one, Illywhacka, and I wasn’t going to cheat by reading the presser. Turns out, the protagonist here is an internet con artist who suckers women with a fake dating service, until his ex-wife (I think – we’ll get there) falls for the trick. And while there’s still a lot of repetition – an average 3-minute length, that flanging tone that persists like a festering wound (bear with me, this is a good kind of hurt) – something about vocalist Will Farrier caught me off-guard from the get-go.

See, even with punk and the demystification of the rock star, a lot of singers who call themselves “indie” or “alternative” (I’ve just come off an ugly Radiation City review, so they’re in my head now) still work hard to lift themselves above their audience. But Farrier, he has a way of rolling between monologues and singing parts that sounds relaxed, assured, all kinds of emotive without even trying, kinda like Lawrence of Felt. I loveI love you, the words that his con artist character employs to weasel money out of women, followed by the gloating ”it’s got a certain ring to it, doesn’t it?” Reminds me the anti-social outbursts of Joe Jackson on Look Sharp! (especially his glorious “I’m never, never going back / I won’t deodorize my primordial stink” – brilliant, that).

Those vocal tricks function in the story-telling process, too. In the pivotal “Pins Drop”, Farrier sings in an elegant, almost Morrissey-like voice the things he says to the woman in a private message, but then talks fast and frenzied when describing his inner thoughts. He does this quite a bit in several scenes to distinguish between two points of view – and it’s great as a narrative device, part of what threw me off-guard in the first place. Granted, sometimes the words rush out in a jumble and the relative plot points get jumbled, but you roll with it and you’ll figure out what’s happening anyway.

As for the story – I won’t spoil it, but what really sells the tale is how well Farrier fleshes out the protagonist, documenting his thoughts as his cold heart thaws (no, seriously – the refrain from the second track “Take Every Cent” ”There’s more to a man / than his heart, so they say… / I try to keep mine / just to the left of freezing”), then ices back over, then finally burns for redemption. Some of the best lines in the whole shebang – so good, in fact, that You Beauty designed the cover around it – pops up during the slower “Flake n Chips”, as the ex-con tries to rationalize his belief in solitude. Happiness is not a dish just served for two / like boiled seafood, he says to himself – and later, when talking about a memory with his ex-wife, he adds, “Well, I thought there was nothing wrong / with flake n chips for one”. The genius in this metaphor is that it’s super easy to see, and easier to relate to – in fact, as of this writing, I had fish and chips by myself just yesterday. It’s one of the many ways that Farrier spins this character that we ought to despise into someone we can understand and feel for.

Regarding the songs themselves – well, they’re just great. You can hear a very Squeeze-ish songwriting sense in the tunes, especially on the jubilant “Everywhere I Wanna Go” (which even has the long spoken parts like “Cool For Cats”). You Beauty also have a certain punch to ‘em, like the Police before Sting nurtured his ego on Synchronicity, which appeals to me. The flanging festering wounds of riffs, as I mentioned earlier, sets a proper jaded mood that fits the shady con, particularly as he establishes his deceptive gig on the opener: “no need to put on that red dress / I’ll be your world wide caress”. And while there’s not THAT much variety, there’s enough to establish the right mood for each song. The more abstract “Romeo and Julie” even invokes a smoky saxophone solo to suggest the course of love as the con sees it – smoking hot at first, but doomed to smolder.

All these words I speak converge to this: I keep coming back to Illywhacka. Maybe it’s cos I like stories, and how plotlines can weave together disparate parts into a whole. Maybe it’s cos the guitars are familiar, and thus offer a twisted sense of comfort to a washed-out new wave kid like me. Nah, I think the major factor is Farrier’s sheer charisma, that bleeds into his words, that makes me believe (or rather, willing suspend my disbelief) that he is the character that he portrays. Yeah. That’s it. And that no other album I’ve heard lately casts the same spell of willed disbelief suspension on me. That’s definitely it.

You Beauty’s beaut of an LP is out now on both the digital DL and vinyl, and you can find both here.