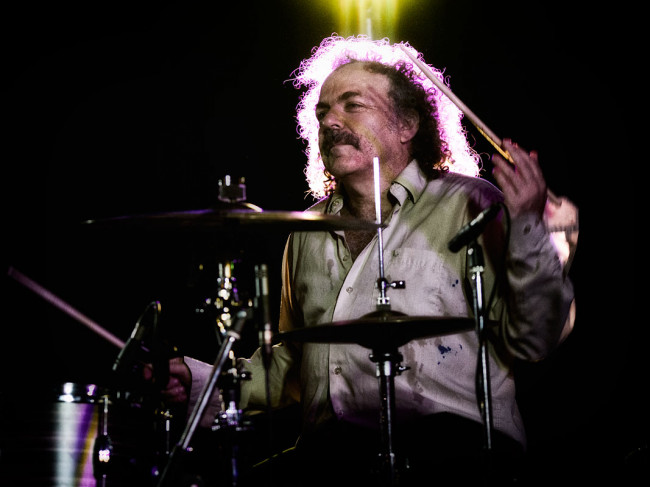 Tonight we’re at the first in a series of GOMA Up Late concerts for the “Curious Affection” show by Patricia Piccinini. (“Our” Patricia?). We’ve come to see Xylouris White and Amaya Laucirica. The cost is $20. On entry I get a mixed, slightly strained vibe. An art gallery transforming into a classy bar and also a live music venue can be a recipe for tension. It is three different types of punter all scratching around for a place to stand. But the lights are low enough and DJ Slymewave is making some interesting choices so I’m feeling settled. The exhibition has so much to take in, the voices of a Friday night crowd swimming through the gallery make for an interesting soundscape. I bought a Shiraz for $12.

First onstage is Amaya Laucirica with a backing band. Her voice sails beautifully above some standard rock/pop arrangements. The organ sound on her keyboard gave psychedelic textures. The group make me think of songs from 90s romantic comedies or when “rock bands” play in high school prom movies of that era. They announce that they have flown from Barcelona today. I cannot tell if I’m projecting a feeling of exhaustion coming off them. Some of the songs are a little fast, others a little slow. A supportive crowd of dancers bop along for them. Amaya plays the tambourine sometimes. At the end of their set she performs two songs solo on the guitar. The minimal instrumentation allows her voice to fill up the whole gallery in a hypnotic way. These spare songs are the highlights of the set for me. It made me think about what touring session musicians are even for in 2018. Surely Amaya could have programmed backing tracks and used the savings on aeroplane leg room.

I started thinking especially about touring percussion in this vein until Jim White started drumming.

Oh my god. I am a fan of the Dirty Three; I have always loved the drumming on Cat Power’s Moon Pix album; I was there because I knew Jim White is royalty but nothing was ever going to prepare me for this next hour. A total revelation. His arms are flailing like an expressionist painter. He’s holding these grooves and patterns while skittering between either ends of sticks, rods and mallets. His eyes are darting, making contact with everyone in the room with this kind of seductive confident charm. This snake aura rushing amongst his audience, luring them in while checking and reassuring his bandmate with a smile or a wink. And George Xylouris is no chopped liver, he shreds and strums that laouto while booming with this deep, resonant voice reminding me of Blixa Bargeld’s later Einsturzende Neubauten work. These are master musicians playing with their entire spirit. Total commitment.

A new song begins with the rattling of a stick on the rim of a snare, the impression of thunder in the distance with mallets on a tom, a melody begins to worm and grow. A motorik rhythm pronounces itself from the ambience and the two musicians drive patiently towards another incredible crescendo. It’s too much. The crowd is losing it. Xylouris sings a lullaby that soothes us before one final onslaught. A guy is dancing frenetically at the front, later he throws a wine cup at Xylouris and gets removed. It’s embarrassing. They finish and I leave totally inspired by what I’ve seen, mind blown shouting “show of the year” into the night.