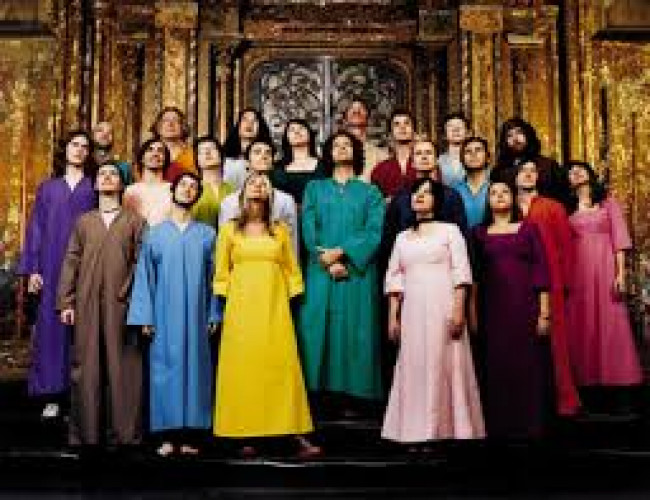 Someone asked me on Twitter the other day if I liked this.

No, I fucking DO NOT!! Puffy-faced twats. It resonates with as much sincerity and love for music and spontaneity as the following …

Bangs wept. What the fuck is up with these wannabe Christian rock bands? Complete fucking dickheads. That’s right: secretly Kurt was all chirpy and happy and buoyant. Secretly, he always intended ‘Lithium’ to be sung by a bunch of vacuous smiling twats like Phil Collins defecating all over ‘You Can’t Hurry Love’ or the Cheeky Girls wiggling their cheeky buns in ‘Touch My Bum’… it’s just that he never quite got round to recording that version. ‘Lithium’ isn’t an unhappy song at all. What the fuck was he thinking?

Listen up. If you think, even for one moment, that there’s anything of merit in the Polyphonic Spree’s horrendously smug, twee, oh-look-at-us-we’re-so-daring-because-we’re-aping-the-bouncing-cheerleaders-in-the-original-‘Teen-Spirit’-video, rendition of ‘Lithium’ then you can fuck RIGHT OFF and take your collection of Washed Out and Vampire Weekend watered-down music with you. Fucking fuckwads. It’s like all the jocks at school given free rein to fuck with the music that you hold most precious, most dear and – laughing at you the whole way – proceed to turn it into something as bland as whatever the fuck bland teen soap opera is showing on TV right now. I bet they sell a shitload of music. Probably to Daily Mail readers. The world is mostly composed of shitheads like them.

And here. And here.

P.S. I wrote this blog entry before I heard the recent Spin Magazine Newermind 20th anniversary tribute album. It’s bad, sure (aside from the two tracks linked to above). Really bad in places. Atrocious. But nothing can match the fucking Polyphonic Spree for sheer smug shitheadedness.