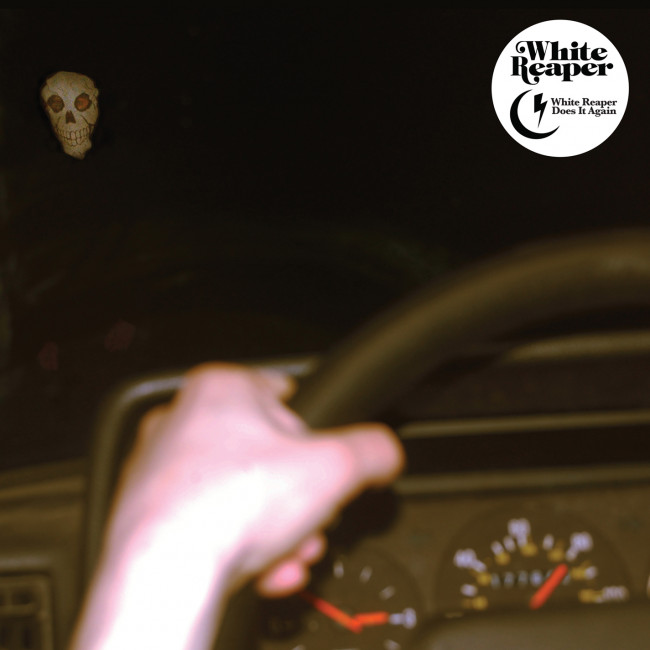 Look at you, with yr catchy 60s-styled garage tunes, and yr tried-and-true hooks, and yr Ramones-y gallop. Look at you guys go. You’re like all the parties I’ve never been to, the ones where everyone is twisting by the pool and some lucky couple’s making out in their cherry red Corvette and no one checks their iPhone because that hasn’t been invented yet. You’re like the hangover I’ve never had, the crush I’ve never met (though god knows I stare too much), the late-night joy ride I’ve never been invited to with the gang of friends I’ve never known.

But how, oh how, do I resist “Candy”, with its grand Phil Spector booming and perky power soda pop fountain riffs and the yowling? And how do I brace myself when you follow that sugar-dusted sepia track with the crawling punk banger “Shiela”, that comes in like a switchblade from the boot to yr gut? How, I ask, HOW? I could get all cynical, but god damn. I see all the leather and the leaping bodies and the Skids shirts (note to self – make a Skids shirt) and it’s all like ARGHHHH. I’d probably be shaking in my boots if I were dragged to a real punk gig, but White Reaper assure me with “Wolf Trap Hotel” that everything’s OK, that no one’s gonna beat anyone else up tonight, not with that happy hoppy punk-before-the-Pistols vibe and the synths bouncing off the walls.

And “On Your Mind”! Hello, Zombies! Hello, flowers in the hair, and smiling people, and streets that you can walk alone in at night! Hello, lover! And “Alone Tonight”! The way Tony Esposito flips his “-ays” drives me crazy, in that swooning fangirl way.

Now, look. I see what you’re up to. I get that you’re using this lo-fi shtick to tap into a nostalgia that yr target audience inherited secondhand from their folks. I get it. But I like it. Even the 38 Special-ish, 80s AOR “Pills”, I dig it. To be honest, I’m really not sure why this beats, say, those albums from Ty Segall and White Fence that I covered last year, and others I more or less dismissed for their backwards gazing. I think it’s the energy. The lack of ego. The lack of frills. And also wicked 20-second solos? Yes, that helps.

No, no, no. What makes you rock the most is that you rock. Pure and simple. You spray graffiti on the art kids’ marble statues and stab yr pocket knives into their framed paintings. Who gives a hoot about awards or lists or anything outside of rock and roll? Not you blokes! And while the rest of the world marches by with their genre fusions and movie-trailer music videos and dubstep beats, you stubbornly cling to yr lighters and wave ‘em in the air like you just don’t care. And good lord, that usually annoys me to no end*, but I admire you guys for guarding yr turf. You don’t preach, you don’t teach, you don’t harass or harangue. Indeed, you don’t have anything to say at all. You’re just there, and we can take or leave you, and you’d just keep doin’ what you do whether we like you or not.

But damn you, White Reaper. You pass.

* – there’s this REALLY ANNOYING guy in Athens, lean and balding and rather plain-clothed, who always crashes the front row like he owns it, flash dances to music that isn’t really meant for dancing, and waves his lighter with that stupid head bow to just about anything. Alone, these anachronistic gestures aren’t that offensive – it’s how he glares at everyone else in the crowd and waves his arms and spouts anecdotes at the top of lungs, as if to broadcast that he is THE LAST REAL ROCK FAN and WHY AREN’T YOU LIKE ME, YOU SOULLESS YOUTH.