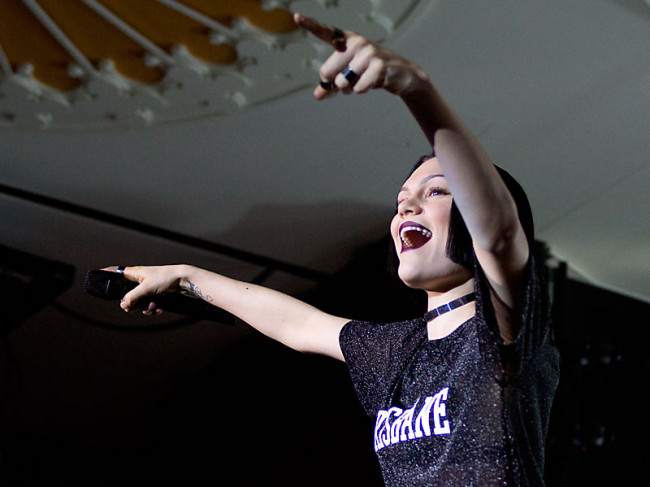 I wrote a tribute to a man I never met – Daevid Allen from Gong/Soft Machine. I tried to make it as honest and true to life (which means injecting humour) as I could. I spoke to my close friend Mike Howlett first, as he’s played bass in Gong for three zillion years. I tried to channel what Mike was telling me. I threw in a couple of tongue-in-cheek references to how dismal ‘serious’ prog became, not to score cheap points, but because it felt appropriate. I lifted a brilliant description from Wikipedia of Gong’s early 70s period. I drank tea. I worried whether I was doing the right thing. It’s one hell of a responsibility, to try and help make people celebrate a life while still feeling their loss.

I wondered whether I should be down Eaton Hills, watching Jessie J. Right up to show time, I wondered that. I was writing my tribute, and it felt right – but I did want to see a genuine 100% pop star, near the top of a game, play such a relatively small venue (2000 or so, I’d guess). Good or bad, like or dislike, I wanted to see that. I note from Justin’s photographs that she seems to have copped Lorde’s look a little: Lorde’s look with added acrobatics and city-loads of confidence. Some folk expressed surprise that I’d want to go: what is wrong with enjoying the spectacle?

I’m assuming there was a spectacle to be enjoyed.

I thought about notions of authenticity and inauthenticity in pop. Far as I can judge, many folk I know dislike Jessie J cos she’s a bit of a hard-headed businesswoman. Not such a sexy image, is it? A female pop star who can look after herself. Maybe they feels that devalues her craft. I’m not sure why. I’m not sure they’re the type of folk who’d like Jessie J even if she wasn’t a bit of a hard-headed businesswoman (writes songs for Miley, dontcha know?) – maybe they’d prefer it if she was a flighty, febrile starlet or more clearly superficial (i.e. female). I wrote this in an email response to a Kylie Minogue review today, in particular answering the rather pat line, “In a world currently dominated by musicians offering up political statements and/or personal narratives, Kylie’s brand of superficial pop falls short.”

My main point about the Kylie line is this: whether the writer believes it or not to be true, it’s just an assumption – she hasn’t offered any evidence to back it up.

Also, I think it’s misleading to write about pop (or otherwise) in terms of its superficiality. To me, that’s just another way of discussing authenticity – which I (and many others) feel is irrelevant in discussions of pop (and quite a backhanded way of saying rock = authentic, pop = superficial, i.e. males are more ‘authentic’ than female). More interesting is the effect pop has on its audience: what the spectacle is like: the interpretation not the intention. Is superficial so bad, even? I agree that Kylie isn’t particularly confessional and that the whole Tay Tay persona is of more interest: but that’s not Kylie’s appeal. All those are good topics for discussion. And that’s why I was frustrated by that phrase. The assertation was made without any supporting arguments.

The Minogue article was expertly written from a news perspective, and it was very readable as well, but it wasn’t a review, not as I understand reviews. It only contained one paragraph that mentioned the show, and frankly I could have written that here from Brisbane. It’s a perennial problem when it comes to live music reviews in Australia: few people here understand how to place the reader in the action.

Jessie J is no Taylor Swift, but doubtless there are any number of folk who disagree with that statement.

I wish I could have had the opportunity to place her in the action. That’s what I kind of excel at.