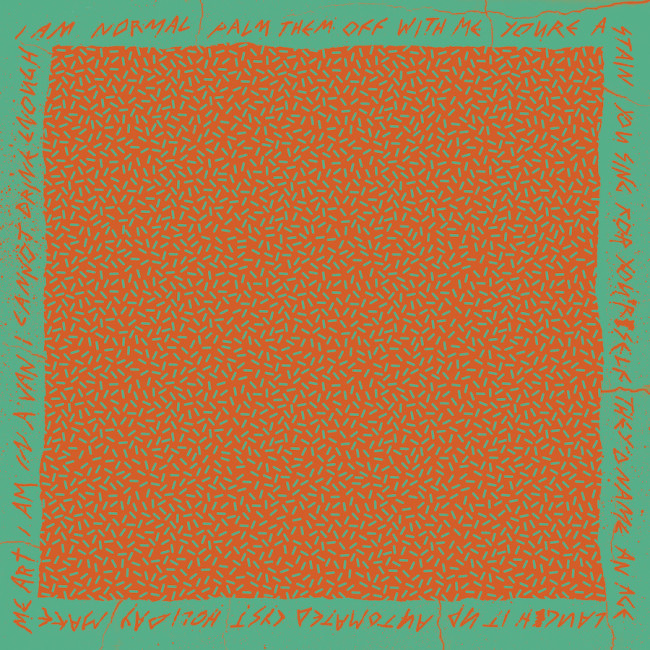 [I haven’t been gone. You just stopped paying attention.]

Fine lines are everywhere you look: under X-acto knives, beside rulers, tied to fishing poles, and also between two opposing concepts that could easily bleed into each other. Here’s one, a hair of a line between brilliance and banality. If you asked USA Nails to walk that line, though, they’d stumble on the first step down the latter side, and laugh all the way down.

No Pleasure presents an obtuse noise, slopped together with other obtuse noises that you’ve heard before into one nut-studded cheese ball. McClusky or Future of the Left spring to mind the most with the heavy-handed staggering (prolly cos someone from this band is also in Future of the Left), except that the guy that sings can’t crack the same witty jokes and winds up shouting words that aren’t as funny. (“YOU JUST KEEP ON LAUGHING / YOU JUST KEEP ON LAUGHING NOW”, he cries on the obnoxious “Laugh It Up”). Other times, like “Automated Cyst”, you hear that lurking Shellac/Rapeman monster bass that reeks of sex. Sometimes USA Nails attempt the razor-cut Wire approach and attempt something abstract, like “You’re a Stain” or “Make Me Art”; however, Spray Paint exist, and have graced alien soundscapes far more sinister and bizarre than the boozy bars and cramped vans that our current protagonists trap themselves in.

(I had the chance to see you in the ATL, Spray Paint, and I didn’t, because Membranes were playing the same week, and I don’t have time anymore for two shows in one week because I actually work now. Sorry, dudes.)

Sometimes, the band just seem to throw themselves into a song, as if they saw the pool and dived in without checking the depth (likely because they were hammered). Press folks describe things as “spontaneous” but these guys embody a now, a hashtagged and gag-bound now, conversations ripped from their contexts and stripped of meaning. “Palm Them Off On Me” – a useless phrase, devoid of image, implying nothing except that things are being palmed off – launches off and there’s nothing to say except the title, with varying degrees of anger. Indeed, USA Nails are always raging over something. They have no other emotion besides simmering rage, sneering rage, and just plain rage.

Part of me wants to enjoy this brazen angry unthinking, and immensely so. “They’d Name An Age”, the longest song, creeps with Daniel Ash-like howling and such, and ticks off the various ages in history: “I would be iron, strong and reliable…I would be ice, solid water / they’d name an age after me”. But then I feel a bit as if some half-wit is sitting next to me and setting up this needless hypothetical situation just to make these punchlines and rib me in the side with his elbow. Yeah, I get it, I get it.

See, I’d give these guys a pass, but other bands like the Ethical Debating Society, Skinny Girl Diet, and Sauna Youth are making plenty of coherent and righteous racket right now. And when I think about it, why should I applaud these USA Nails folks who wank out volume for the sake of ungodly ear damage, when others use noise to empower themselves or flip a bird at the rich or distance themselves from the unenlightened masses or comment on the angst of modern living?

I dunno. Not feeling ya, guys. Not that all noise should blare with a purpose, but USA Nails just aren’t unique enough to merit plaudits for hissy fits that others before them have pitched in more creative ways. Good for one giggle, I guess. But their pens are mightier than your swords.