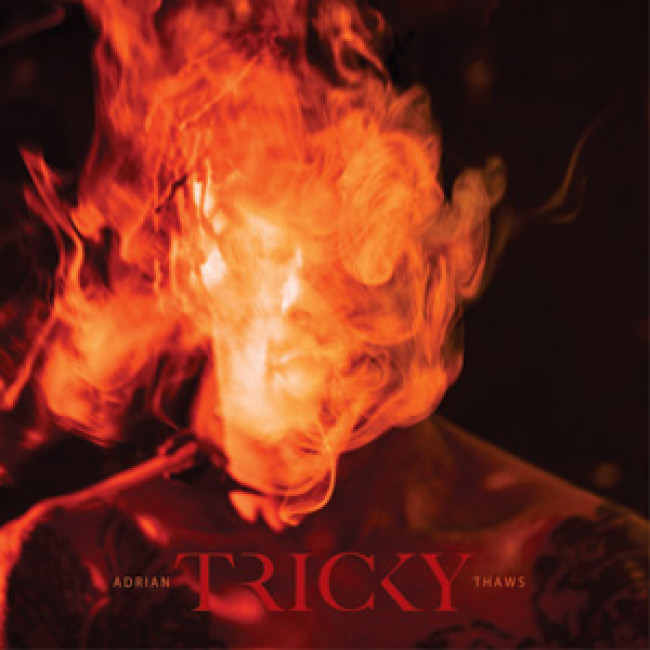 Hey. Guess how many guest vocalists Tricky enlisted for this album. Go on, guess. And no peeking.

Because, let’s face it, folks: this Adrian Thaws is essentially this generation’s Nearly God, as the dark lord of trip hop once again hides behind the curtain and twiddles knobs for the modern-day divas who fell into his web. However, that earlier affair trapped the listener in a tiny room, where Tricky pumped in diesel fumes almost the entire time – and of course you’ll asphyxiate yrself, ‘cos you’re just too damn fascinated to leave. Here, though, you’ll find escape hatches a-plenty, leading out of the batcave haze into neon-lit dives and streets in the open daylight.

Sometimes, the switcharoo is dazzling. I kid you not, “Nicotine Love” is just as toxic and addicting as the name implies.

First the bare, throbbing EBM pulse, old school as D.A.F and sopping wet as sex. Then Francesca Belmonte comes in and owns it, acid disco queen of the leather-clad underground, all attitude and no emotion. Then, she and Tricky slip into a hazy muted refrain, paranoia masked by suppressed lust. Some urban insurrection is hinted at, some oppressive power that silences original thought – but that’s far too abstract to take seriously. It’s much more compelling if you think of the duet as an exchange of forbidden love (even if no clues for such a reading exist in the lyrics – not in these lyrics, anyway).

Other times, the change in territory can be quite frustrating. “Lonnie Listen” could have been as heady as “Nicotine Love” – another sweat-drenched EBM bit rips through it, a slower Nitzer Ebb riff, maybe – but the utterly lazy beat defangs the thing. And don’t get me started on these thuggish raps – although, the more I listen, the more I wonder if Tricky put on this real dick of a persona on purpose, as a ruse. Honestly, he drops so many cloying “for real, man”s that you suspect that, no, he’s not for real. “I’m Lonnie Listen, not what I was christened… I’m Lonnie, friend me / why don’t you befriend me / on Facebook?” The exaggerated hustler-type, coupled with Francesca’s weary refrain (“exercise every day and I’m still not fit / my kids are ugly and I ain’t got shit”) do suggest that maybe Tricky’s not as blood-sucking malicious as he seems, that maybe he feels the single mom urbanite and her day-to-day struggles.

That’s about as close to real city life as Tricky gets. A revolutionary vein coarses thhrough “Nicotine Love” and the brief “The Unloved Skit”, but Tricky offers few tools to tap into it. On the latter, AJ stands in as the conscious urban sage, pondering statements like “We demand recognition for the fallen soldiers of the streets. We need a need a revolution” and “Why isn’t the world set up right? We’re meant to be intelligent animals”. Right, that’s quite astute of you – but who’s the enemy? A revolution against what? And what’s to be done? Perhaps AJ alludes to a universal truth that the listener’s s’posed to be keyed in on, but the album doesn’t support these ideas too well –

– particularly when the supreme badass chica of grime, Bella Gotti crashes the meeting later with one straight-up gangsta hip-hop number, aptly titled “The Gangster Chronicles”. I mean, yeah, it’s DOPE – she TOTALLY KILLS IT on the acid house grime slamfest “Why Don’t You”, too – but how do we reconcile this with the very grim and responsible monologue two tracks back, about “this precious, fragile life”?

Anywho, Tricky loves his girls, and they always win on this LP. I love the smoky, Tricky-free “Something In The Way”, its eerie solace (courtesy of Frencesca), a vacuum space of benign miasma. I wasn’t sure at first about the blues-infected slow jam “Keep Me In Your Shake”, with Tricky’s asthmatic drawl reeling the downright sexy Nneka toward his clicking mandibles, but her striptease in the Warm Leatherette breakdown cinches it. Mmmmm.

Now, we have not touched the two worst tracks on here. The most Massive Attack-esque track on here, “My Palestine Girl” deserves a trophy for “most facepalm-worthy lyrics about current events”.

No. Just no. Don’t go into Mezzanine mode to capitalize on an international tragedy. Tricky, ever the dark lord of thieves, sidesteps commenting on the senseless religious strife to relate the perilous journey to his lover. You asked for a revolution, didn’t you? Why drop the whole precious life business here, in the midst of a fuckin’ war zone?

The other awful track is the cover, “Silly Games”, which commits no offense as severe as “My Palestine Girl”, but its lax poppy sunshine jars completely with the rest of the album, and tastes too honey-sweet at the tail end of such a raunchy album. Should’ve stayed a single. (See what I mean about the modern-day Nearly God, though? That one had a cover, too – except “Judas” meshed in seamlessly with the rest of that LP. This one, not so much.)

As the alien Silver Tongue rounds out the album, we’re left wondering, “Well? Was this a good ‘un, or what?” To that, I’ll say this – Adrian Thaws isn’t cohesive by any stretch of the word, but isn’t bloodless, either. Kinda weird, though, to hide in the shadows so much on an album that bears yr real name – this should signify an unveiling of the self, or at least a spotlight trained on the self. Instead the ladies glow brighter in Tricky’s cavernous lair – which, mind, we approve of. But anyone expecting to catch an essence of the elusive producer via Adrian Thaws will only grab at ashes. And, eh, maybe that’s the point. Still – does one have to surrender consistency to remain an enigma?

Anywho. Feel free to cherry-pick on this one.