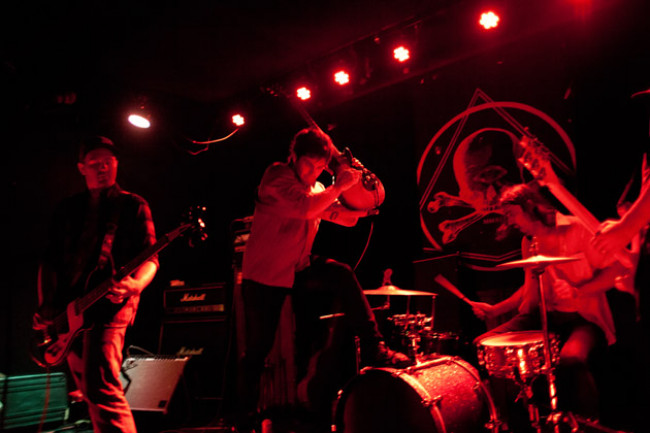 I’ve been meaning to write a live review for a while, but the whole process always intimidates me. For one, I’m not a photographer. And two, I’m never sure if anyone cares for my account of a gig. But last night, flushed and pseudo-drunk (I’d only had ginger beer, but I was giddy), I dashed off a summary of the show I’d just seen to some fellow Collapse Boarders, and was roundly encouraged to re-print it. So wa-la, here’s three recent shows I’ve seen, in three easy-to-swallow capsules:

1. Obnox and Pere Ubu (20 June @ The EARL, Atlanta)
I came to see Pere Ubu play some new songs. Instead they only played old ones. Obnox were better – they were a black duo, and they played to a white crowd, and they were punk as fuck.

2. Las Robertas, OMNI, Eureka California (14 July @ The Georgia Theatre Rooftop, Athens)
Eureka California are always great, but tonight they were really great, because they took a 1-minute song from a local band and stretched it out to five minutes. OMNI looked and sounded like the Gang of Four, but without the communism. I got bored, walked to the bathroom, and hung out in there with the lead singer of Las Robertas for the rest of OMNI’s set. Las Robertas were all right.

3. Nob, Henry Owings, The Gotobeds, Arbor Labor Union (21 July @ The EARL, Atlanta)
Arbor Labor are lame and their fans smoke. The Gotobeds had a comedian open for them, who specialized in “one-minute band impressions”. Then the Gotobeds came on and ruled. Oh, and there was this punk band called Nob that played maybe 20 minutes and also ruled.