The Veldt – The Shocking Fuzz of Your Electric Fur: The Drake Equation (Leonard Skully) 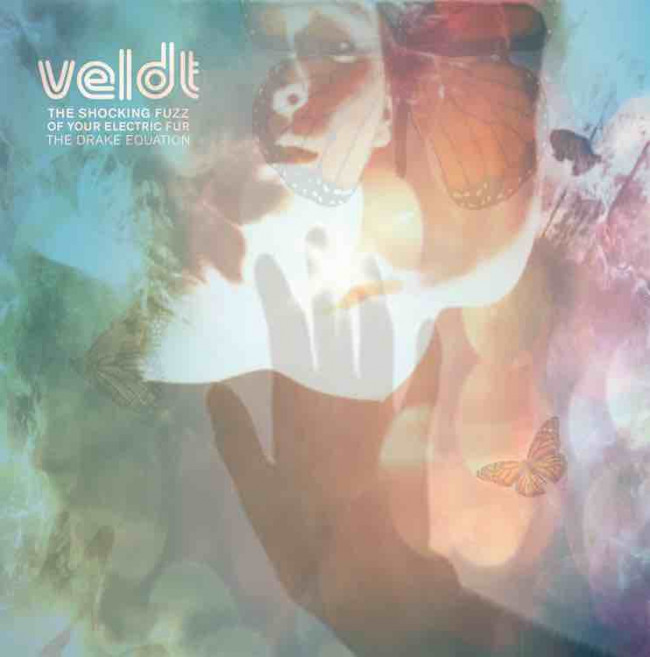 Funny what people remember, eh. On Friday evenings at work, my co-worker Karl flips on the local college radio station, the much-belabored WRAS. From 8 to 10, all kinds of dreamy goodness fill the dish room – y’know, MBV, Cocteau Twins, Slowdive, Kitchens of Distinction, all the way up to Pinkshinyultrablast and other bands that simulate the familiar sinking feeling. Funny, eh.

Look. Between Friday evenings and car rides with the incoming Saint Marie catalogue, I’m keeping close tabs on shoegaze. They stifle their vocals, sink them into the starry miasma, and veil their human forms behind plutonic ideals or incoherent fuzz. And I swim in them regardless, but the waters don’t pull me down as they used to. The genre needs a jolt.

Enter the Veldt, i.e. twins Danny and Daniel Chavez. Why haven’t I heard of these blokes before? Why is the canon of shoegaze so bleached? They had two EPs, both very early 90s-ish with the acid-house style, but on Afrodisiac Daniel ventured to croon with a warmth beyond the usual fuzzy pillow effect of dreampop; “Revolutionary Sister” even crackled with rebellion, merging lectures for universal love with soulful duets. One wonders if that surly dude from Hootie and the Blowfish took some cues from ‘em. (I doubt it, though.)

But now they’re back, in a mouthful of an EP called The Shocking Fuzz of Your Electric Fur: The Drake Equation. And while the title is quite the tangle, my god do they sound lovely. No, not just precious painting behind museum-grade glass lovely, but warm musty loving – the years have mellowed the twins’ attack, and the swirls of heavy mauve that settled to the bottom of early tracks like “Heather” now billow to the top. I’d say they resemble the sublime haze of A.R. Kane, but that’s because those mythical dreamers sat in to produce the whole shebang, so go figure. The real selling point, anyway, is how Daniel coasts on the top, both surreal and very real at once.

Now, the Veldt have toyed with hip-hop beats before, but in The Shocking Fuzz they mesh an all-out ride cymbal massage with enough potent wind magicks to whisk listeners off their feet. That heady mix bubbles to a soothing boil on the obvious single “Sanctified”; with the hypnotic flutes that bookend the song, and Daniel’s hallelujahs to the heavens, the Veldt establish a crystalline standard for the rest of the EP, distinctly non-MBV in character. Despite the title, nothing about this is fuzz, from Danny’s opal wings that bear “And It’s You” into the stratosphere to the spinning diamond that lights the swoon-inducing soul of “A Token”. (As I type this, I recall using similar imagery to describe the Ballet School’s “LUX”, and the Cocteau Twins connection snaps together. CLICK!)

But now, for the very definition of sublime – a higher plane beyond our own, to inspire awe with equal parts beauty and awe – look no further than “One Day Out Of Life”. It’s the one track on the album without a distinctly hip hop rhythm, drifting instead on a soft shuffle in a magnetic field. The crackling waves from Danny that lift “One Day…” ascend gradually, with the sort of care usually associated with, I dunno, Mogwai or Sigúr Ros. And me, I feel again as if I’m staring at more than a painting behind glass, though the song shimmers with the finesse of a master craftsman.

In the end, I can’t be too cynical about the current state about shoegaze, cos I’ll inevitably climb back down to cover it. But realize that the Veldt have emerged at the top of the ladder, outside the cave, really on a separate plane entirely. This EP isn’t enough, though – and the twins get that, cos they’re striking out on an east coast tour of the US soon, and following up with an LP later this year. Thus, The Shocking Fuzz provides the perfect platform for the Veldt, one where hundreds more listeners can witness the next electrifying step: shoegaze that swells to more than an embrace, dreams that stack into a vision. They’re calling the next one Revolution Hymns – so I’ve got high hopes.

The Veldt’s new EP drops on April 8th on Leonard Skully Records. You can nab the digital from their Bandcamp page, or order the 12″ from the label’s site.