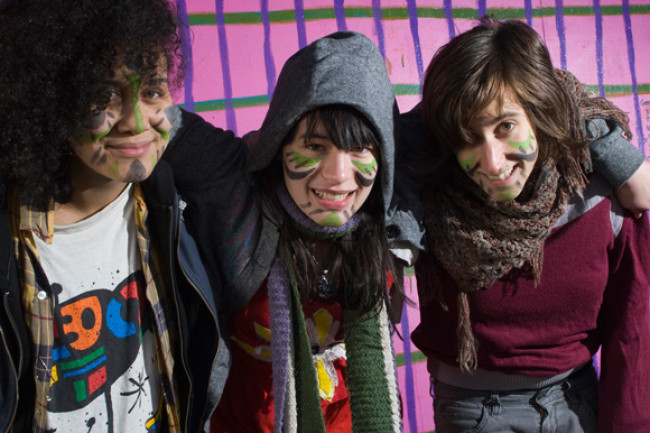 This series been around for a while now. There have been around 700 of these suckers, give or take. My initial vow – not to repeat the same band twice – was broken years ago (initially by Kate Nash, if I recall correct). Too many names. So much wonderful music.

I forget sometimes. No reason. I just forget. Dissimilar engagement. Travelled back to London last year, first time in four years. Saw a few bands, none made me dance so gleefully as these. (Even at the age of 52.)

So I should’ve remembered. Right? So obvious.

The best quote I gave last time round was “Trash Kit sound like bafflement”. One of those phrases that can be interpreted as you want it. I should take up astrology, a proper job.

Did I remember? Even when I gave ’em a mention yesterday? So obvious.

I am clueless. Often. I still know what the FUCK I like though. Give me five seconds, that’s all I ever needed. Trash Kit. From London. A three-piece. They make me giddy with delight, drunk on euphoria. The songs are the strange rhythmical noises that I’ve loved since before they were born. The lineage is… the lineage is the lineage I love. The Slits, Electrelane, Halo Halo, Lesbo Pig. (Whoa! STOP RIGHT THERE! Go and check them out if you ain’t checked ’em out. Trust me. Trust me. Trust me.) Music played like I like it played: memorable, unpredictable yet structured, fluid, fluent, fermenting. But did I remember even then?

A late in the year release that has been a slow grower – unlike their debut album, which hit me right from the start. The album has all the same bounce and spikiness as their debut, but the production comes off a bit quiet. It caught me off guard at first, cos I thought maybe it was more of a demo, but with repeat listens I grew to appreciate the lightness. Reminds me of how Raincoats made that leap on their third album Moving.

He references a Raincoats album I still ain’t sure of, but this album? This Confidence? Better than eating?

I like the way you can every instrument, including the silences. I like the unity, the restraint. There’s no loss of form, or energy, or focus. I LIKE THE RESTRAINT.