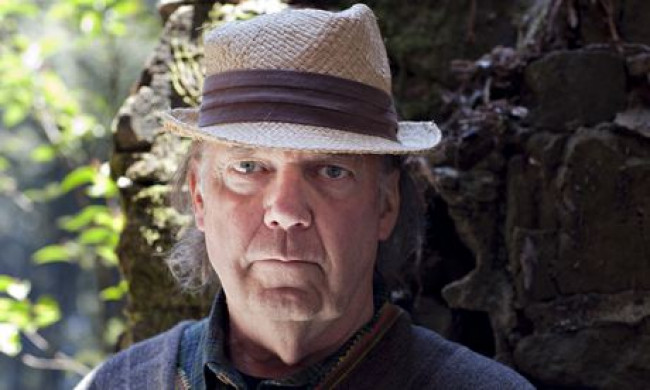 I’m not Neil Young. There are many reasons for this, not the least of which is that when I sing I don’t sound like a cranky Kermit the Frog.

Also, I can’t fucking play electric guitar or manipulate feedback to save a noisy miner.

But whatever. If I was Neil Young – and I so am really not it’s starting to become kind of painful thinking about it – I wouldn’t have decided to record my newest album with Jack White. I mean, even Neil Young’s got to despise The Raconteurs. (They misspelled it. There should be a ‘u’, not an ‘o’, in the middle.) I mean, no way. I’d be aware that I’ve had it going on for decades now, and barely need charlatans and record collecting geeks to help me hone The Sound. I’d have been wrong.

Damn. This new Neil Young album A Letter Home is fine. And I mean fine like you haven’t ever experienced the sheer thrill of listening to your own home recordings over and over again until there’s a dull pummelling blister in your ear where some semblance of sense used to exist. See, I long since figured The Beatles are a great group, but they knew shit about recording technique past about their fourth – possibly fifth, if you count Beatles Live At The Star Club –  album. I’ve always managed to play their songs way better than they managed, with my mangled, rudimentary two-note piano technique and my mangled, rudimentary, two-note, former choirboy voice. I’m serious now. I don’t give a fuck what you think. (This, incidentally, is near core to the reason why I get Daniel Johnston and you don’t.) (This, incidentally, is near core to the reason why I love this new Neil Young album so greatly, and you don’t.)

I mean, let’s have a listen. Don’t listen on headphones. Don’t listen on fancy speakers. Listen when you’re driving through howling wind or morning stillness, nothing existing, not even the road in front.

I covered this song once. It sounded almost exactly like this, ‘cept I was in a bath not a telephone booth and I didn’t have a cracked acoustic guitar for company, and I got stuck after the first word.

I recorded in a booth like this once – Japan 1996 to my new sweetheart Charlotte. I can’t vouch for the performance but the recording itself remains magical, and that was only to CD.

There’s no good or bad way to listen to music, to record it, to parade it, to perform it. I just happen to fucking LOVE this.

I used to sing ‘On The Road Again’ all the time in the car.

Except I rarely got past the first couple of lines.

I don’t resent the fact Neil’s done this. I don’t give a shit if you happen to think it’s a gimmick. The whole of fucking life is a gimmick. This recording (and music) (and voice) resonates with me so hard. I don’t care whether this is real or fake or mind sweeping. I just know it resonates. Hard.

The Guardian sort of nails it here, and also misses the point. You don’t sit on the wall when it comes to music. Ever.

At the height of an argument in which he is embroiled as the staunch defender of the importance of high-fidelity sound, he’s taken it upon himself to release arguably the lowest-fidelity album ever made by a major artist. A Letter Home was made in a restored 1947 Voice-O-Graph booth, a fairground attraction that allowed users to take home a vinyl record of their voice. The result is muffled, distorted and buried beneath layers of crackle and hiss. Depending on your perspective, it either adds a magical patina of age to the music, or sounds like someone locked Neil Young in a cupboard then set about cooking a fried breakfast. Either way, it’s hard to see exactly how it could be improved by being listened to in 24-bit 192khz sound, which Young has spent the last few years insisting is the only way to really appreciate recorded music.