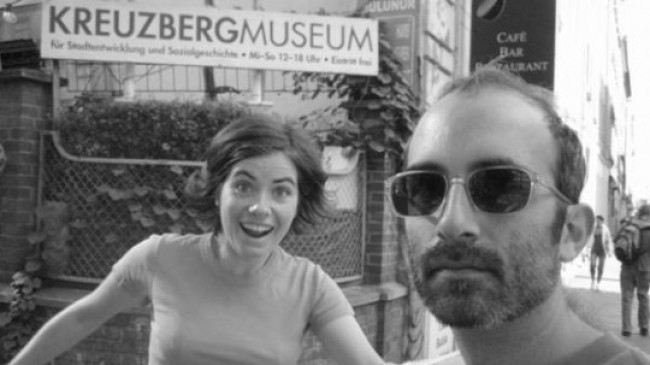 It chugs along gently. It won’t intrude – and thus won’t make you happy, joyous – unless you let it. It blossoms with melody and personality. There is room to enough for you to stay and sup, if you want.

Or you can just turn your back. That’s fine too.

Somewhere down the line I’m reminded of an evening spent in Glasgow in the early 90s, in the company of The Pastels and the films of Jacques Tati. This is a fond, treasured memory. The restaurant where we ate forgot to charge us our bill, so we all ran back in and paid them the money. The colours were black and white, electrifying. The knowledge that people I really liked seemed to also really like me to filled my heart to bursting. Honestly.

I have a feeling that Stanley Brinks has probably released about 13 albums since I last blinked in his direction, but that’s his prerogative – and mine.

It’s very easy to do this music wrong – country slide guitar, folk music, the crackle and thrum of an acoustic. Or perhaps it isn’t. Perhaps I just don’t like many of the personalities this music is infused by. Twice, in the last 15 years I’ve been at shows where the onus was on me to introduce myself and exchange pleasantries with a view somewhere down the line to becoming much, much better acquainted with that night’s singer… probably more than twice, but twice is what I recall this afternoon. Amanda Palmer, and Stanley Brinks. Each time, I was too overawed. Each time, I was scared the magic would dispel. That the train whistles would cease to sound. That the sky would not turn out to be on fire. That no one looks for maggots in rice.

I still regret it, but far better that than to talk over folk once more.

It ain’t breaking down any barriers of expression. It doesn’t need to. It didn’t erect any barriers in the first place.

Here’s the song. Freschard’s rap about putting cucumber in her hair really makes it.