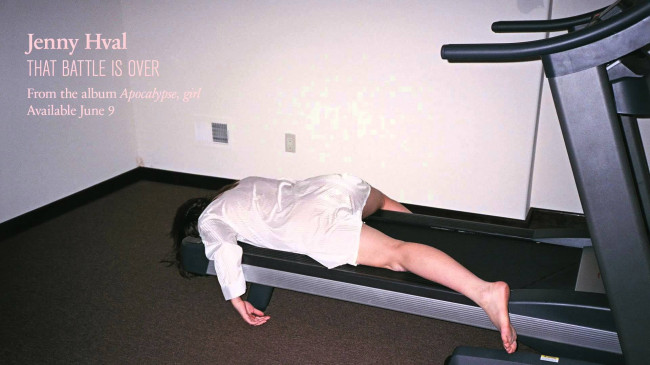 When I operate at my fullest, my writing seduces musicians.  I have never stated this explicitly before but I have never had to write about Jenny Hval’s new album before.  It is the dance of seduction I am performing here, or one of the dances of seduction.  I understand the power of the printed word.  The written word.  The spoken word.  The spoken word articulated with no fear of consequence.  You risk offending if the tone is even the semi-demiest off.  You risk inflaming.  You say it and consume what you want now.  I have had musicians write to me in the past, in the present – speak to me, write to me, kiss me full on the lips in some secret voluptuous pact – and warn me that their partners are jealous of me, they want no contact, but the desire does not die.  I have never had to write about Jenny Hval before.   I have written about her, sure.  I show that previous video of hers to students because I know it provokes, challenges.  I show it because I know how much of myself it reveals by my admission to its straight sexual power over and around me.  And not only that, but because I think it’s a wonderful indication that sex does not have to be thrust all this or thrust all that, that typical girls have typical smells.  That it can be far more magical, far more mysterious than convention allows.  (Convention today? 50 Shades of Grey.)  I know by showing Hval to people I unsettle them.  I do not play that game as often as I like but I need to be aware of the context, the the context around me.

Even before I heard the new Jenny Hval album it had made me go weak at the knees, the anticipation of it.  “Anticipation is so much better,” as my ladies once sang, but not always.  Not here.  Not now.  Not tonight.  That cover photograph of a lady on a birthing ball on the sleeve to Apocalypse, Girl is sexy precisely because it is a lady on a birthing ball.  With all the attendant smells, and calling.  I know I may be entirely missing the point of Jenny Hval here.  I know there is that risk.  If you are not prepared to be embarrassed every time you step foot on a stage then – why bother?  She may not be deliberating over whether to perform the dance of seduction every time she straps on a guitar, sings sweetly against society’s mores and constraints, steps in front of a camera, exposes the contradictions and frailties of clichés for what they are, steps in front of a camera, strokes a horse’s mane, performs the dance of seduction.  I know that writing these words reveal far more about me, the spectator.  This is what happens on the edge of history.  I have never felt the need to write about Jenny Hval before.  I go weak at the knees at the thought of listening to her album again.  She makes me go weak at the knees.  I know she is performing the dance of seduction.  And you can never tell when the dance is stopping and the dance is starting.  Life itself is a dance of seduction.  It is not up to you whether you want to take a part in it.  It is up to you what you do with it.

That is it.  It is cold and chilly here – one of the few nights in Brisbane where the temperature drops so.  “What does it take to take care of yourself?” the lady asks.  “What is it that we’re taking of?”

I can never even hope to compete with someone like Jenny Hval.  I have not mentioned the music.  The music makes my knees tremble, my heart stop, my fingers fumble across the keyboards.  Milk turned to honey.  Creepy is sexy, trust me.  I do not WANT homely.  I do not view homely as an insult but I do not want it.  Unless I do.

I want to bleed every time you look at me.

This is how I wear lipstick.  Every night.

As Scott rightly rights (and read his review, you will not find better of better all year):

At times the album reminds me of Laurie Anderson at her best, only it’s better than that. And I don’t feel guilty making the comparison since JH says the words ‘big science’ right there in the second verse of the first song on the album.

Would somone care to explain to me why she is not on the front cover of every music magazine in the world right now?  Eh… except for gender bias, of course.

I find it infuriating that people say stuff like that: that battle is over, feminism is over, socialism is over. It is like the right wing capitalists saying left-wing ideas are old-fashioned. What you realise is that capitalist ideas are pretty old, too. They just come from people with a lot of power.

2 Responses to The return of Everett True | 160. Jenny Hval