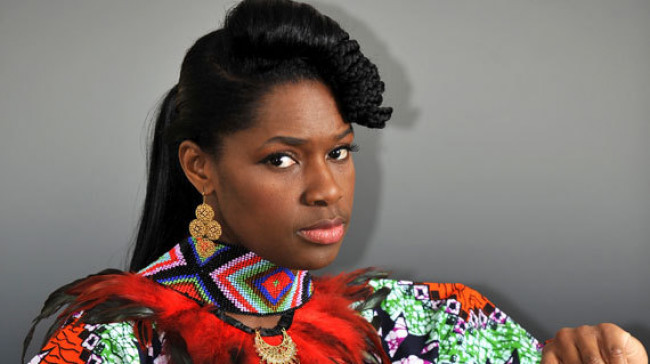 I nearly decided against this as a Song of the Day because my frame of reference is so slight. It’s not like I can’t describe it, though.

African highlife, a smattering of the streetwise rhythms that made Tom Tom Club so intoxicating, repetitive beats continually shifting and changing and teasing: vocals that keep on and on punctuated by tight brass and the occasional echo of Yoko, vocals that work their way into your brain insistent, and stay there, fighting for leg muscle space with the beat and strange off-mic carousing; a gospel feel, a pounding to your brain, synths that are often described as “analogue” without seeming contradiction, not so much down with the funk as the Afro-funk…

(Didn’t The Raincoats attempt – and fail, sadly – something like this on their third album Moving?)

This track has been dismissed as lightweight, like it’s too eager to get the party started. Bullshit.

Vocalist Eno Williams looks so cool in the video: possessed, stern, playful. Fully down with it. Sure, the album had far greater breadth…but depth? What a weird way to judge music. Next they’ll be disclaiming ‘Wordy Rappinghood’ for being too darn commercial, and this video for being too darn fun. Just cos something’s enjoyable and/or immediate doesn’t mean it has less value. I mean, duh.

So, anyways. Not sure what my problem was at the start. Such a crackin’ good album. Such an amazing single, party by yourself or the whole street’s invited. Who cares?