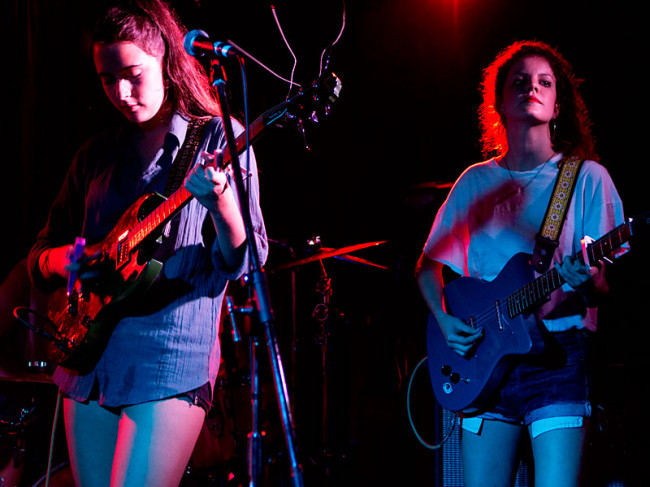 I have no idea if they’ll remain this good the whole time the four ladies, the two ladies, are together. It seems near unbelievable they could be.

But there again, there’s Kim Deal.

And you’re probably shit in bed, too.

I want to quote two writers here, both male – but I really do feel my gender needs to balance up the scales in a MAJOR way.

Hinds (SPN). They were called Deers, now Hinds, and you’ll be hearing the name again. I’m not the first to tell you but it bears repeating. What you’ve heard is pretty damn charming…but that was a duo and you’ve gotta hear the way the band plays it. It LURCHES, it SWINGS and GRINDS, it SHUDDERS stop, you peer over the edge and at each other for a weightless age, it DROPS, it SPEEDS, people SCREAM. We’re talking Breeders levels of queasy joy, with impish grins and banter to match. Monkeeing around. They’ve got songs to spare, the ones you know and plenty you don’t, like the final number that probably doesn’t, but sounds like it does and might as well, chant “GABBA GABBA HEY!” for a minute or ten.  Both crowd and band are stoked, laughing, we picked a winner. When it ends I text a glowing review to Mr True only to look up and find him at the foot of the stage, bone-dry and smiling. (In Words: The Courtneys + Hinds + The Furrs @ Black Bear Lodge, 20.02.2015)

So the show starts and they come walking out and waving in a way that’s so simultaneously dorky and cool that it makes both those terms absolutely meaningless (which it turns out is part of The Breeders genius and why we should worship them, but I’m getting ahead of myself). (Live Review – The Breeders / Deerhunter @ Variety Playhouse, Atlanta, 15.05.13)

One Response to The return of Everett True | 125. Hinds