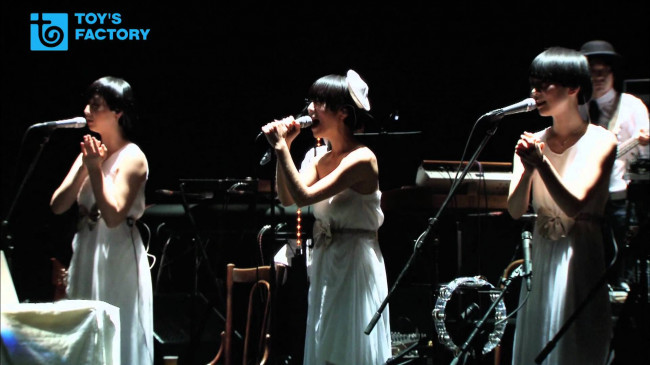 Sometimes, I’m in sync with the rest of the world.

I take that back. Little, it seems, is known of the experimental Japanese artist/mainstream Japanese pop vocalist known as salyu x salyu. Certainly here. This, despite her connection with Cornelius. This, despite a YouTube video of a festival appearance with the Bank Band that’s attracted over 1.7m views. I don’t like the song – figuring it to be sentimental musical-style tripe – so I’m not listing it here. But I could be wrong. I have been before.

It’s the Cornelius connection that blew me away, earlier today. So much fun. I could let you know who this reminds me of – a little from column A, a little from column B – but I read a brief Twitter rant from Jake Cleland earlier today, bemoaning critics who continually compare present-day acts to the past, bringing ’em down. That’s not my intention (my intention is more to provide a few connections, establish credentials) but I take his point. This is ridiculously fun, layered, minimalist, vocal acrobatica.

If this was the only trick she has, it’d be more than enough for me. But it’s not. I mean, check this live footage out. Oh wait. That’s the same song.

Salyu aka salyu x salyu started life as the fictional singer Lily Chou-Chou (based on Faye Wong) in the 2000 film All About Lily Chou-Chou and she now has a discography stretching back 10 years. Oh, and another unknown/already immensely feted fact? Tarantino used ‘Kaifuku Suru Kizu (Wounds That Heal)’ from the Lily Chou-Chou soundtrack in Kill Bill. Here it is. Can you name the scene?

This is perhaps the greatest song in the world right now. From Ghost In The Shell, whatever that is. salyu x salyu is coming to Brisbane next week as part of a “Cornelius presents” show. Damn yes, I am excited. Damn yes. This is the stuff she’ll be doing, not that nonsense Bank Band stuff or emo-core balladry.

This one gets me every time. Worth lining up four of five of these videos, and playing them all simultaneously. The Flaming Lips can kiss my spotty white-boy ass.