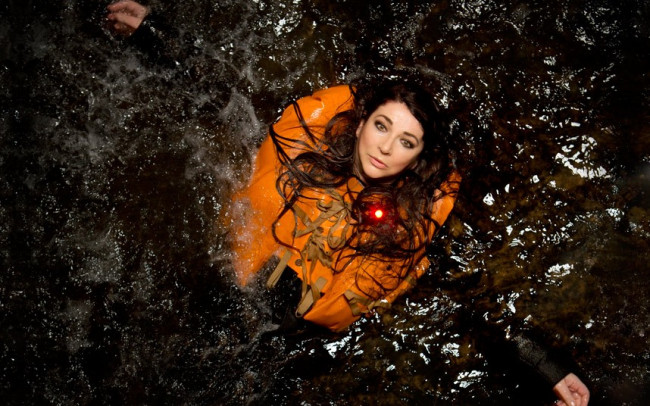 The week’s big news, I mean other than Collapse Board somehow being overlooked in the list of the 100 most influential music blogs, was Friday’s surprise announcement that Kate Bush was playing her first live shows since 1979.

It’s the most indulgent and opulent thing I’ve ever done. It’s funny but a couple of months ago I had a really vivid dream in which Kate Bush announced a UK tour and I was devastated that being in Australia, I was going to miss out; last Friday the dream became reality. To compound the anguish, I got sent a pre-sale code thanks to being on her mailing list but within a couple days of the dates being announced I started thinking what was really stopping me and that if I didn’t go I’d always look back with regret. You regret the things you don’t do much more than the things you do.

Pre-sale codes is one thing but there’s no such thing as an occasional Kate Bush fan, so I expect large numbers also got sent an email with a code to let them buy tickets a couple of days in advance of the general sale. Despite the near hyper-ventilation, despite the shaking hands that made it impossible to type any of the required details correctly the first time around and despite the world’s most difficult to decipher Captcha system, it was easier than I ever imagined it would be. It was a whole lot easier than some of the times I’ve tried to buy tickets to Australian music festivals, when you spend forever in the queue and find out after a few hours of waiting that the whole thing sold out within the first few minutes.

I mean, I’ve still got to arrange (and pay for) flights and tell work that I’ve having a few days off (which probably isn’t going to please them given the busy time of year).

Now I’m just thinking about what we’re going to get?

Will it just be her on a stage playing solo piano songs?

Will it be fan(atic) pleasing obscurities?

The new photograph used to advertise the tour hints at The Ninth Wave, which would be magical, a dream come true for any fan of her music. While most people are probably familiar with the singles from the A-side of Hounds Of Love, it’s the sevens tracks on the B-side that probably mark the highpoint of Kate Bush’s entire musical career.

Having spent the whole day listening to nothing else, thoughts started as to dream setlists. This 22 track (Spotify counts the 42 minute ‘An Endless Sky of Honey’ as a single song), 2 hours and eight minutes would do me fine, although I can’t stop playing around trying to perfect the running order.

A bunch of other stuff happened this week but to be honest, it’s hard to get very excited about anything else at the moment.

Afghan Whigs – The Lottery
The last time I paid out a lot of money to see one band was when I went down to Byron Bay for the sole purpose of going to see Afghan Whigs a couple of years ago. Originally I was accredited to photograph the three-day festival but the weekly Brisbane music paper I photographed for closed down (RIP Rave) and three weeks out from the festival I found that my photo pass had been cancelled. I did come close to flying down to Sydney for a single night to see them play down there, because the Splendour organisers don’t allow any sideshows in Brisbane but in the end decided that it was just easier to drive a couple of hours down the road (albeit into a different state and a different timezone) to see them. Worth every penny although (a) much of the rest of day’s line-up was forgettable; and (b) some bright spark decided to schedule them at the same time as At The Drive-In’s only Australian reunion show.

A new song from a new album. I did look to pre-order from Sub Pop but the P&P was going to be almost as much as the album itself and I’m not really wanting to spend US$52 on a record. I don’t think I could afford it now anyway given the obscene money I’ve spent this week on musical purposes.

Pixies – Snakes
I used to love the Pixies so much. I liked the first of these new songs (‘Bagboy’) a lot more than I expected to, even though it was at least twice as long as it needed to be but the last couple of songs they’ve put out have been everything I dreaded about and more.

Swans – A Little God in Our Hands
At least Gira’s back to save the day.

Slint – Pam
I don’t think I’ve ever heard Spiderland. Am I missing anything? This is an unreleased song from the obligatory forthcoming deluxe version. It sounds like I’d need to grow a beard to stroke to fully appreciate it.

Velociraptor – Ramona
In which, at least on first listen, Velociraptor do their very best Arctic Monkeys impression and cause a whole bunch of heartache in the process. It does sound better after a few listens, maybe it’s a just a ‘grower’, not something you normally associate with the band and their collection of instantaneous pop hooks.  What made those those early recordings was the scuzz but this too clean, mastered-for-radio-play-song has just stripped much of the soul out of it and turned the previous garage monsters into an FM beast.  High rotation and potential commercial radio crossover beckon.

Generations – Fly Like Superman
To finish, a shout out to my old mate and all-round good guy Brad Marsellos and some “alternative, hip hop, punk, garage, psychedelia” from Bundaberg, Queensland, Australia.  Available as a name your price download from the duo’s Bandcamp.