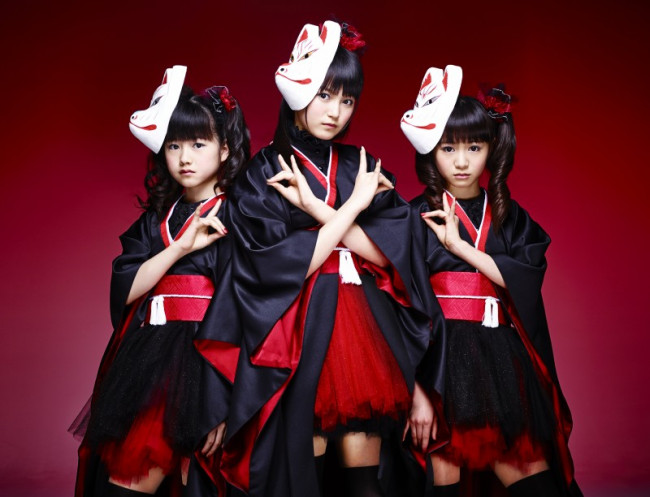 The annual gathering of angry men with tattoos and long hair (i.e. Soundwave) starts this weekend with the Brisbane leg at the RNA Showgrounds on Saturday. A quick and dirty unscientific study (we looked at the profile pictures on Soundwave’s website and counted up band members) shows 318 musicians playing the festival of which a grand total of 3 are female (Nostalghia singer Ciscandra Nostalghia, Nancy Vandal vocalist/saxophonist Gilli Pepper and Danger Kids drummer Katie Cole). It’s a pretty shocking statistic that less than 1% of a massive touring music festival is female. Metal isn’t exactly Collapse Board’s thing but are there really no predominantly female acts or even female-fronted acts that the organisers could find to put on the bill? If there isn’t we’ll just have to suggest Japanese band BABYMETAL for next year’s festival.

Wax Idols – When It Happens
The Soundwave take on metal is wide-ranging and takes in all manner of glam/industrial/punk/thrash/anything ending in –core bands.  The Sisters of Mercy even played a couple of years ago, Andrew Eldritch showing that time waits for no man so maybe the Siouxsie-lite of Wax Idols wouldn’t have looked out of place being added to the bill.
http://www.youtube.com/watch?v=Rv4A-UF21Pc

Rolo Tomassi – Howl
Rolo Tomassi did play a very early but very thrilling Soundwave set a couple of years ago so it was a surprise that they haven’t been asked back this year.  Instead the band came out in November for a short tour of their own.
http://www.youtube.com/watch?v=UsX6DhPOBVI

High Tension – Collingwood
There’s always the possibly that Soundwave organiser AJ Maddah could break his business model of not booking Australian acts for the festival outside of a few notable exceptions. It angers many people in Australia, both those in the industry and those that support it, but it’s never bothered me. It’s his baby, he can do what he likes with it. I can understand where he’s coming from but think that there are a few bands that would improve any festival line-up and High Tension would be a perfect fit for Soundwave.
http://www.youtube.com/watch?v=uG96s9Ye2OY

The Nation Blue – Exile
High Tension share a drummer with The Nation Blue and although they’re nowhere near being a new band, they’re the sort of band that would find a new audience at Soundwave and deservedly so.
http://www.youtube.com/watch?v=WosESNOiqNo

Harmony – Do Me A Favour
In another degree of separation, The Nation Blue share a singer with Harmony, in the majestic Tom Lyngcoln. Not a Soundwave band by any stretch of the imagination, they have just released their second album, Carpetbombing, and are already getting considerations for album of the year by the Australian music press.

Hits – Take Your Pills
Maybe AJ could look closer to home and think about Brisbane band HITS for a future Soundwave. The twin guitar attack of Stacey and Tamara alone would almost double the female contingent playing at this year’s festival. The new album has been a long time coming but the first teaser (a whole 47 seconds) was released a couple of days ago. In the meantime here’s 2012’s ‘Take Your Pills’.
http://www.youtube.com/watch?v=E2WyY8MwA04

Sixfthick – Smokin’ In Bed
Or maybe Soundwave should just book Sixfthick to play every year.

Bo Ningen – DaDaDa
AJ also took over running Big Day Out this year, and although the press has been quick to point the finger, the damage was largely done before he took over. As we commented on a few weeks ago, the festival’s standout band by a country mile was Bo Ningen, who have just released a teaser from their upcoming second album this week. Soundwave really should have put them on the first plane back to Australia to play this year’s festival and fill in for one of the seven bands that has withdrawn for various reasons in the last couple of weeks. I’m pretty sure you wouldn’t get into any arguments and cancellations because they were being made to play too early in the day, they just don’t look like the prima donna types to me.

Screamfeeder – Burn Out Your Name Free Album Download
And finishing off with something a world away from Soundwave. as is becoming a tradition, Brisbane band Screamfeeder have made another one of their albums available as a ‘name your price’ download, this time with 1993’s Burn Out Your Name. It’s only available for a week, you know what to do.