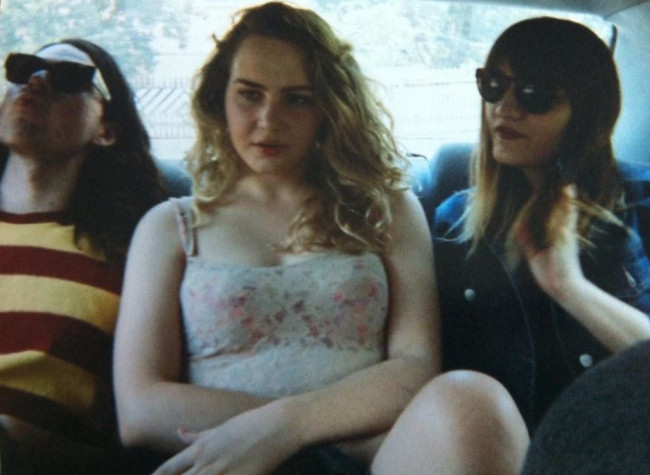 BITCHRATCH – Male Eruption
Even living in a small city like Brisbane it’s difficult to keep up to date with everything that’s going on and depressingly easy to completely miss amazing bands. A friend posted this on Facebook last night and in the last 12 hours they’ve possibly become my favourite new Brisbane band. Bitchratch’s Facebook page has them playing upcoming dates in Melbourne, with a previous post saying that a show they played at the end of January was the last time Brisbane would see them for a while. Hopefully that doesn’t mean that like so many before them that they’ve upsticks and moved from the Big Country Town to the Big Smoke. If they have, Brisbane’s loss is Melbourne’s gain.

If you’ve got this far and haven’t pressed play, perhaps the lyrics and songs structure comments will make you reconsider. HAPPY VALENTINE”S DAY!

Toxic Lipstick – Horse 4eva
Listening to BITCHRATCH make me consider the perennial question? Whatever happened to Toxic Lipstick? I have a feeling that they disappeared to Japan for a while although their soundcloud and Facebook pages now have them living in Melbourne. Getting nostalgic about moving to Brisbane in 2005, it’s difficult to argue against the notion that the music scene at that time was so much more interesting/entertaining than it is now (or at least it was a whole lot easier to find). I blame the demise of Ric’s and 610.

Iggy Azalea – Fancy (Feat. Charli XCX)
The Australian music industry is a strange beast (and strange is really far too polite a word). If, like the Northern New South Wales-heralding Iggy Azalea, you head off overseas and make a name for yourself without going through the officially sanctioned Australian music industry route of triple j uneartherd/Bigsound/triple j/Big Day Out etc then you’ll be met with a reaction between the cold shoulder and a shrug of indifference . If you haven’t played a gig at The Tote you’re nobody, an absolute nothing. Given all the discussion about triple j and their love of (sk)(h)ip hop, it was unexpected that a search for ‘Iggy Azalea’ on JPlay, the database that logs everything played on the station, returned the following:

Too commercial for triple j? Too female? Not ocker enough? *shrugs* *whatever*

Blank Realm – Reach You On The Phone
Released today, this video is currently appearing on every Australian music website, so I guess we shouldn’t be any different.

Laura Imbruglia – Straight To The Bar
TRUE FACT. When we first started Collapse Board, we were contacted by Laura Imbruglia about being a contributor. We set her up with a user name and password and promptly never heard from her again. Still, no hard feeling as Collapse Board’s loss is pop music’s gain.  Laura plays a free show at The Powerhouse on Sunday afternoon, with support from Seja.

Roku Music – Reflector
A second track from Roku Music’s upcoming debut album and like a lot of people I can’t wait to hear it in full.

I LIKE TRAINS ‏- Spencer Perceval
iLiKETRAiNS celebrated their 10th anniversary this week.

By tonight we will have officially survived 10 years in rock and roll! Happy Birthday ILT! Twitter Q&A to celebrate at 8.30. #AskiLT #iLT10
— I LIKE TRAINS (@iLiKETRAiNS) February 10, 2014

They were only just starting to make a name for themselves when I moved to Australia and, truth be told, I haven’t really heard anything about them since their wonderful first album. I blame the tyranny of distance. Good to hear they’re still doing they thing though, here’s a track from that first album about Spencer Perceval, the only British Prime Minister to be assassinated.

Marvin Gaye vs Mansun – Take It Easy, Marvin
Yes, yes, I know, mash-ups are so 2009 but I’d never heard this one before and it works really well. I always really liked Mansun because they always brimmed with millions of ideas and, rightly or wrongly, decided to stick as many as they could in each song, Six is the album Muse could have made if they hadn’t have been shit.

King Parrot – Dead End
I watched The Shining on TV a few weeks ago for the umpteenth time as (a) it’s one of my very favourite films; and (b) my better half had (somehow) never seen it. (Her verdict: It wasn’t as scary as I had made out but they used the music well to create atmosphere). The Shining done Australian style staring The Tote as the Overlook Hotel. King Parrot are off to the US for an extensive tour which bizarrely includes playing at SxSW but I guess makes up for the same well-connected, landfill indie acts that the Australian music industry keeps sending over there year-after-year.

Brisbane Gig Of The Week – Wire/Per Purpose/Multiple Man
It’s been quiet times in Brisbane thanks to the Australian festival season meaning no overseas acts play any shows in the city for a large chuck of the summer. Even without this gig drought, there could only ever be one consideration for Gig Of The Week, with Wire playing at The Zoo on Wednesday night. In our technology-impacted interview with Colin Newman and Graham Lewis (due to be posted at the start of next week), the band told us that they would probably be playing a lot of songs from the next album (“7 or 8 songs”). I guess we find out whether or not they play anything from their current Change Becomes Us album on the night but hopefully they’ll ‘Reinvent Your Second Wheel’.

Listening to an album by a band in their 37th year (give or take a few year’s worth of hiatus and inactivity), you can’t help but feel that if Wire were a bunch of 25 year olds, NME would be going crazy over them, if they were a bunch of 25 year olds from Melbourne, the likes of Mess+Noise would be going crazy over them, or if someone like Coldplay had released a single like this it would be all over the radio and Number 1 all over the place. Still relevant, still brilliant, I’m just really excited for the chance to see them next week.

It’s also a really good looking support cast with Per Purpose and Multiple Man rounding out the bill.