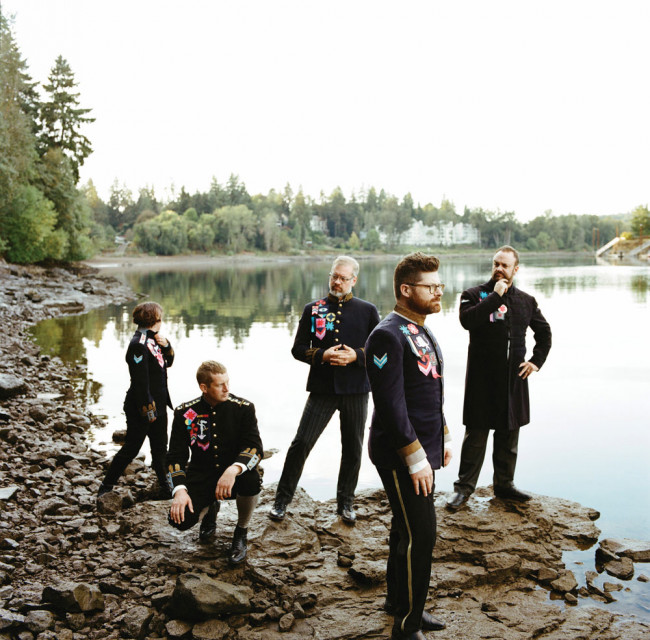 For the second time in a month I find myself ‘down by the water’ for a show at Melbourne’s Hamer Hall, and for the second time in a month, it’s not to see the Melbourne Symphony Orchestra. First it was Calexico, now The Decemberists, an indie folk-rock band from Portland, Oregon. Being more accustomed to Melbourne’s traditional ‘rock’ venues, it has been a novelty to attend these gigs in the hallowed acoustics of the concert hall.

Having played a couple of sets at the Byron Bay Bluesfest the previous weekend, The Decemberists are in fine form and provide a most entertaining night of music and almost vaudevillian pantomime.

Lead singer Colin Meloy is both commanding and quirky as front man. Initially he appears on stage solo, opening with ‘The Singer Addresses His Audience’, the first track off the band’s most recent album, What a Terrible World, What a Beautiful World (Capitol 2015). The other six members of the band join him and break into ‘Cavalry Captain’, one of the more catchy pop songs in their repertoire. Hamer Hall proves to be fantastic for their seven-piece sound (albeit that from my balcony seat, the main trumpet melody is somehow lost during ‘Cavalry Captain’).

In a set that focuses on their two most recent albums, they play many crowd pleasers and ballads. Highlights of the night include ‘Calamity Song’, a song originating from Meloy’s son, ‘Hank, Eat Your Oatmeal’, ‘Down by the Water’, indirectly channeling R.E.M. in the best possible way and ‘16 Military Wives,’ complete with an audience sing-along conducted by Meloy, which generates laughter worthy of the concurrent Melbourne International Comedy Festival.

Their first encore concentrates on older tracks, less well-known to the crowd, but a second vigorous return includes a cover of Hoodoo Gurus’ ‘Death Defying’ and the lyrical epic ‘The Mariner’s Revenge Song’. This rollicking maritime ditty is hammed up by all on stage, and features the piano accordion and ghostly lyrics of Jenny Conlee. When guitarist, Chris Funk, gives the signal, the audience screams in unison at being eaten by a giant whale. A large blue panto-style Moby Dick swims across the stage as the band all fell down dead. Very amusing.

The more serene ‘Dear Avery’ finishes their consummate performance, leaving a lasting impression of their creative musicianship. Look forward to their next visit.