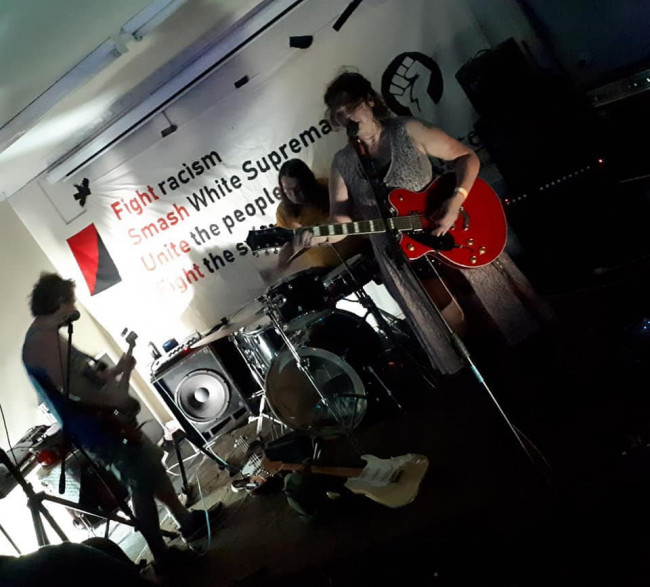 Whether an artist’s music reaches millions or just a dozen, the impact of their work is, in most cases, no less profound. Caroline Milne’s self-taught guitar playing and talent as a songwriter had been heard by few, if any, by the time Mark Spinks became aware of them. A veteran of the Australian underground, Mark saw something special in Caroline’s work. And so, after Caroline served a brief stint alongside Mark in D.I.Y. outfit Gravel Samdwidge, together they began a musical project of their own.

Performing under the name of 2 Chevrons, Spinks and Milne struck an instant chemistry. It wasn’t long before the two began recording an album. No Rules In Outta Space was intended as Caroline’s debut, a record showcasing her talents as an musician and songwriter alongside Mark’s. It was something she had long dreamed about. And, after many long years lugging equipment for bands, paying easily avoidable cover charges at local gigs and editing her own underground fanzine Out of Square, it was finally her time. Unfortunately, Caroline passed away before the album could be completed.

After a period of mourning Mark, determined to finish what he and Caroline had started, set about the painful process of completing No Rules In Outta Space. When he was finished, the album was, as he and Caroline had originally intended, released via record label Albert’s Basement. Yet instead of a bright introduction to Caroline’s work, it was an epitaph to a life cut short.

Q: Could you provide an overview of the recent events leading up to this release?

MARK SPINKS: Originally Caroline had filled in on bass for another one of my bands Gravel Samwidge. It went so well that Caroline and I decided to put together our own band, 2 Chevrons. Caz had some vague ideas and I wanted to do something that was completely different from Samwidge. Around the same time another one of my bands, Scrabbled, had ended after the very sad and untimely passing of Bek Moore. It was a no-brainer really.

The songs for our first album No Rules In Outta Space came together quickly. Mickey [Zucchini] from Albert’s Basement heard our tracks and he was happy to release them.  Unfortunately, Caroline tragically passed away just before we could release it.

We just didn’t think it would turn into a tribute album. I didn’t think history would repeat itself in this very sad way. In saying that, Caroline would have wanted this to be a celebration of her life and her extraordinary talent.

Q: Why is this music so important to you?

MS: 2 Chevrons’ music is very important to me. It stands as a document to Caroline that can never be taken away. It also stands as a testament to the connection and love we had for each other. Her dream was to play music and get something released no matter how small.

I also think it shows the connection Caz and I had personally and on a musical level. I found her songs to have an honesty and fragility that you don’t often hear in other music. She had been through a lot of sadness and I think it shows in the beauty of the songs.

Q: What was it about Caroline’s music that distinguished her as an artist?

MS: I found Caroline’s songs to have a brutal honesty and fragility to them. They are raw and emotionally upfront. A little skewed as well. Her guitar style, I found to be highly original which often happens when someone is self-taught and doesn’t play guitar “properly”, so to speak.

Caroline lost her house and animals in a fire in the Blue Mountains in 2013. It had severely traumatised her. I felt that it came through in her songs. I was happy to be able to help Caz get her ideas down in a musical form. We made a great team in that way.

Q: Was finishing these recordings difficult?

MS: Difficult is a very apt description. After Caz passed, I had to revisit the tracks and do some bits and pieces here and there. To listen to her voice on these songs, well you can imagine, I pretty much cried throughout the whole process. The artwork had already been done before she passed so there is no dedication to her in the liner notes unfortunately, but No Rules In Outta Space is very much a dedication. I wanted it to be a celebration of her life and I think it achieves that.

Q: Is there a particular song which you think stands out above the rest or takes on a special meaning?

MS: I’m happy with all of them, but the track ‘Caroline’, which is basically a love song, wasn’t originally going to be on the record because it was such a personal song. But I’m glad that we decided to put it on. I’ll also mention ‘Disconnection’, which has Caroline’s stamp all over it. There is also ‘Flash of Light’ which was the first track we did together.

Q: Could you provide a few pointers to people interested in Caroline’s other work?

MS:  2 Chevrons was Caroline’s first band. But she was heavily involved in the music scene, especially in the underground. I have really looked up to her over the years.

She once had a fanzine in Sydney called Out of Square which reviewed live gigs and interviewed acts like The Scientists, Scattered Order, The Hard Ons, and The Beasts of Bourbon to name a just a few. She was also was part of the technical crew for Ollie Olson’s No. Ollie would later go on to form Max Q with Michael Hutchence from INXS. She knew all the cool kids!

MS: I have a busy year ahead. Gravel Samwidge has a new full-length vinyl coming out on Swashbuckling Hobo Records and my solo act, Mark’s Paranormal Dsyneyland, has a debut release coming out through Eternal Soundcheck. In relation to 2 Chevrons, there are more recordings I would like to release that are a step-up production wise to No Rules In Outta Space but they are not quite finished so I will have to prepare myself for the inevitable sadness of delving back into the remaining  Chevrons material in the coming months.