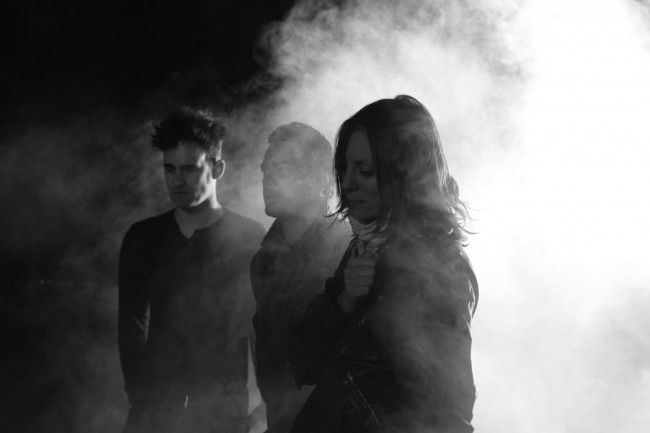 Venita talks to Black Rebel Motorcycle Club drummer, Leah Shapiro, about creating the new album, Wrong Creatures, and the band’s hopes for some warm weather during their upcoming Australian tour.

Next week’s forecast is warming up as Los Angeles trio, Black Rebel Motorcycle Club, rock up to our shores to promote their latest album, Wrong Creatures (Inertia, 2018). They’re sure to love some sun, given they’ve been trawling through blizzards in Canada and the U.S. since January.

I saw BRMC play back in 2010, but I have to admit, I hated the venue (Billboard, Melbourne), and they didn’t play ’American X’ so I was a bit dissatisfied. I intended to see them again at the third Harvest festival in 2013, which was cancelled by the promoters due to poor ticket sales up north (all I’ll say is ‘Boo hiss’ from us Melbournians about that one). BRMC still came to Australia with rescheduled gigs, but I couldn’t go. I’ve kind of been waiting to be requited since.

The new album is really cool, they’re playing The Forum and The Corner in Melbourne next week, and I’m thrilled to have the opportunity to chat with drummer, Leah Shapiro, about upcoming events and her involvement in the creation of the new album. She’s one strong woman, having fully recovered from urgent brain surgery in 2014, to resume playing hundreds of gigs per year with her bandmates, Peter Hayes and Robert Levon Been.

Leah is originally from the city of Aarhus, in Denmark. She always played drums as a kid and moved to England and the U.S. after high school to study music. At 19 she landed in New York to study Music Business at NYU, but quickly realised she’d rather play than work in an office, and has since drummed her way through bands including The Ravonettes and Dead Combo, who supported BRMC on their Baby 81 tour. When BRMC’s drummer, Nick Jago, left the band in 2008, it was Leah who got the gig.

I talked to her during BRMC’s gruelling tour through the frozen wilds of North America.

Good, yeah we’re in Toronto tonight. We did Europe right before the holidays and New Year’s, then we started the U.S. tour on January 14 and we’re sort of in the middle of it. It’s going good, but being on tour in the winter, everybody’s been sick. It went around the bus pretty quickly. There are a lot of icy roads and snow, which is never really that great to be driving through – a gigantic vehicle pulling a trailer – but we’re all getting by okay. We’re excited to come to Australia afterwards.

I’m sure you are. It’s really hot over here at the moment, so you can look forward to that.

You have no idea how good that sounds!

How do you feel about coming to Australia? Do you enjoy coming here?

Last time was 2013 right? Yeah, absolutely, we don’t get to come that often. As you said, it’s not like the U.S., but it’s not like we’re close by, so we can’t just pop on over. It’s always exciting to come to Australia. It seems like there’s always great crowds and beautiful cities – as much as I’ve seen. I do remember – I think it was the first time I went to Australia with the band – we were in Perth and we stayed at this beautiful hotel right by the ocean. That was amazing, awesome.

I don’t have as much free time as I’d like. I’m not totally sure what our schedule is looking like, if we have any days off anywhere or a little bit of extra time during or after the tour.

I’ve been listening to Wrong Creatures a lot. What can you tell me about its creation?

Gosh… its creation… when I think back to the making of the album, in my mind, we did a summer tour in 2015 and when we got back, that’s when we really started digging the writing process and we’d write in this studio room. I have good memories of working on each of the songs that are on there, going ‘Are they possible options?’ or ‘These ones are patchy in parts’. Just playing them a million times before they get into the pre-production, getting ready to go into the studio. A lot of hours spent, you know.

I read that the three of you have a bit of a ‘democracy’, in the creative production. Do you think that’s an accurate reflection of how it goes in the band?

Yeah, for the most part. You know I think that it’s been good to not have anyone shut out in the creative process. It’s really important to make sure you hear each other. When you do that, when you work hard on just one thing, and the song is fine, it pushes the others. In general the process is so long, it’s so repeated, it gives you perspective. You don’t wanna get caught in just your own perception on how the song should turn out.

Do you just write the drum parts or do you have an input in the songwriting as a whole, the lyrics and all that kind of stuff?

The lyrics I prefer to stay away from unless either I’m specifically asked for my opinion, like on choosing the versions, or a line, or something like that. But on the whole, I just do the drum part.

From your personal perspective, where do you get your inspirations from?

The song determines the research, especially the way we write together. We’re not like a concept-album band but we really talk about where we’re going to go with the song. The deeper we go, the more lost we get, and that’s when I think I should stay out of the way!

I’ve heard BRMC described as rock’n’roll and grunge and psychedelic and there’s a tribal sound to a lot of the songs. For years I’ve thought the music has a Native American feel. Is that a conscious thing for the band?

Look, I totally agree with that. I think that definitely, as far as drums go, these are ancient ryhthms. The way drums and rhythm is used within different cultures, it’s sort of trance and meditative. The rhythm gets you in a trance-like state. I think what you say is pretty accurate, but sometimes saying that can kind of get you into trouble and I try to stay away from that.

I agree – sometimes you think these things in your head and you want to say it, but it can get you into trouble. I just wondered, because I’ve always heard the rhythms in BRMC’s music as tribal and I love that feel, so I wanted to ask you if that was the case.

I think obviously… the first song of the record has that tribal influence.

Gosh, obviously growing up, you always have a level of interest in what your parents listen to and my dad was a big classic rock guy. He had a lot of Beatles, Stones, Doors; he was a great fan of Frank Zappa, Velvet Underground, that sort of stuff. He had a pretty incredible vinyl collection and really cool old Queen stuff as well.

In Denmark I remember the radio at the time was pretty commercial and not the greatest, so it wasn’t very interesting. But the grunge period was pretty big and created a great mark on me as well. I was listening to a lot of Nirvana and Rage Against the Machine, but I can’t really remember the first album I bought.

My first rock concert – I tried to go this festival with my friends and I got sick for a day or two and had to go home, so that was a real experience.

Yeah, it’s one called Skanderborg Festival. It was about an hour away, so not so far from us. It’s a really huge festival.

So these days, apart from bands that you’re touring with, do you listen to many other bands and what would be your current favourite music?

Yeah, all my friends are musicians so they all have different projects that they’re working on. Like our friends, they’re from LA called Restavrant, (now known as Snakearm). They were out with us in Europe. They just did a new EP and they’re great. One of the best live bands I’ve ever seen. Really really cool.

The Black Ryder, they’re from Australia originally, but they moved to Los Angeles. Great band, great friends. They’ve done this other project under the name Null and Void, and we actually did a song on that record – the guys (BRMC) sang a song on that record (‘Falling Down’). It’s more mellow electronic stuff. I don’t know what you call that kind of music, but it’s a great record.

Unfortunately we’re out of time, but I’ll look forward to seeing you in March in Melbourne.