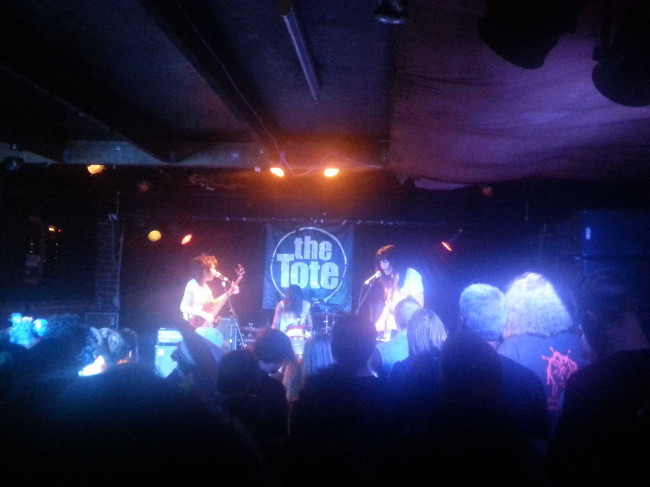 I love bold women. I love brazen women. I love loud women. Unforgiving, passionate and with a touch of ego. I love watching these women on stage, because it is everything I have ever wanted to be. Which is why seeing The Coathangers, an all-gal punk three-piece from Atlanta, Georgia, left such an unerasable imprint. A bold, brazen, loud, unforgiving and passionate imprint.

Drummer and co-vocalist Stephanie Luke, known colloquially as Rusty Coathanger, clearly cut her teeth in basement hardcore shows as an adolescent. She is tough, abrasive even. I’m sure she’s been described as ‘one of the boys’ but I feel like she would punch you for suggesting such a thing. The words don’t roll from her mouth, but are barked out from the back of her throat, juxtaposing well with guitarist Julia Kugel’s (or Crook Kid Coathanger, alternatively) cherubic yelps. Bassist Meredith Franco may be Minnie Coathanger but her diminutive nickname is a descriptor of stature only, as she got her turn to pull out the front to chirp a tune about how good breasts are. The girls displayed an obvious enjoyment for their time on stage, and performed with a casual confidence that certainly rubbed off on me. Also they covered ‘Sex Beat’ by The Gun Club and I am sure anyone around me could hear a very audible squeal.

This band easily made a good friend of their audience, reveling in one another’s rowdiness, however they did seem to pull a bit a mixed crowd in the end; young boys who seemed to not really notice or care where the music was coming from but delighted in its volume nonetheless; a slew of older punk show attendees already proudly wearing their Coathangers T-shirts under denim jackets heavily adorned with patches; and lots of women just like me, who exited the Tote feeling invigorated, and in search of their own touch of ego.

I was really just in my all-girl punk rock band element (which, let’s face it is my default element) and making idle conversation with other gals in the loo line, it was exciting to know I was not the only one who had allowed an impression to be left by these girls and this band.