The campaign for real rock 2015 | Beck at the Grammys 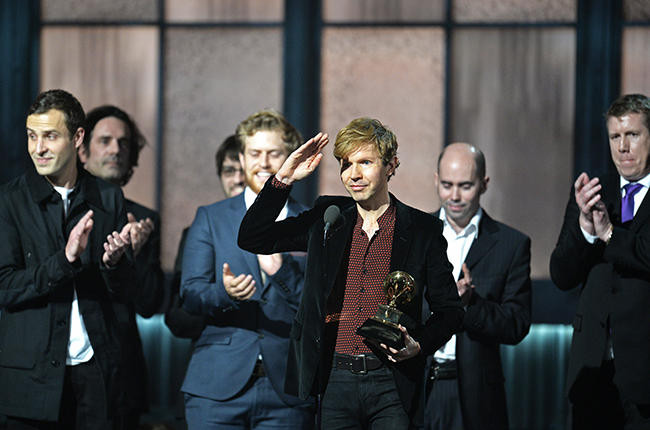 This entire conversation is taking part on social media.

“Beyonce [sic] used a team of 25 writers and 16 producers. Beck just one: himself.
Another comparison was the number of instrumental credits each artist received. Beck sang and played 17 instruments on Morning Phase including a charango and a zither.
Beyonce [sic] sang.
Beyonce [sic] is great, don’t get me wrong, but she’s more the queen of a sexy, singing celebrity conglomerate than a musician these days.” (Grammys 2015 comment: Beck trumps Beyonce [sic] for artistry)

Exhibit five
Some dickhead on Twitter who clearly doesn’t understand that pop and rock music serve different functions, and hold different forms. Do they laugh at musical notation as well? Probably a Foo Fighters fan

“Judging by this speculative and moderately factual study, it looks as if Kanye West was scientifically correct with his statement that Beyoncé was the better album. Which, if you also consider the fact that she approached this self-titled album as if it were the definitive work of her career – whereas Beck’s Morning Phase seems like the end of an artistic stopgap – is probably a fair assumption.” (Beck v Beyoncé: who should have won the Grammy for best album?)

As Wallace Wylie wrote on Facebook, “Beck’s album is tasteful and boring in a way that is demanded of indie music. Beyoncé’s album is brilliant and interesting. Of course Beck won. It’s the Grammys.”

As Ann Powers wrote on Facebook, “A great African-American pop crossover artist makes an album that speaks powerfully about the legacies of hip hop and soul, of black family, womanist empowerment and black love. She loses an award, not, as expected, to a young white British man who made an album lovingly appropriating African-American sounds and styles in service of same-love liberation, but to a forty-something white American man who’s spent most of his career respectful and lovingly appropriating hip hop and soul, but who this year made album that stands strongly apart from those legacies and current pop world, choosing quietude over beats and an inward perspective instead of an extrovert’s. One win against Beyoncé would have felt to some like theft: the other feels like erasure. This is not about personal best; it’s about warring ideologies concerning what makes music matter and, because this argument never goes away, authenticity. It’s about identity and listeners being moved by what gives them insight into their own lives rather than the lives of others. I wonder if at this point Beyonce loyalists and Beck loyalists can even hear each others’ music. The irony is, I bet both artists truly appreciate each others’ work. They are the ones with bigger ears, it seems, not us.”

As Tobi Vail wrote on Facebook, “Did today’s music writers really fail to discuss the ongoing racist history of the Grammys as cultural context for Beck/Kanye/Beyoncé incident or did I miss it? Also, that was pretty good for a Beck song (sorry mom, not a fan) but, COME ON, that Beyoncé record is a piece of sheer magic and definitely more in touch with pop music today than that Simon & Garfunkel singer songwriter style that is so predictable…

As I ranted on Facebook, “What THE FUCK DOES IT MATTER HOW PEOPLE PLAYED ON OR PRODUCED YOUR ALBUM? Why the fuck does it matter who wrote what song? The Beatles were a covers band. The Stones too. If U2 had brought in that many people to prop up their mediocre music the establishment would be falling over themselves to praise it. I like Beck ok but he knows this is not his moment. It ain’t his fault the U.S. record industry is comprised of backscratching interest-defending racist sexist blowhards but… Jesus. Wouldn’t it be sweet if he just handed it over? (Or even better, someone abolished the Grammys and ALL award ceremonies forever.) As someone else said, if even Beyoncé can’t buck the system then what the fuck chance has anyone else got?”