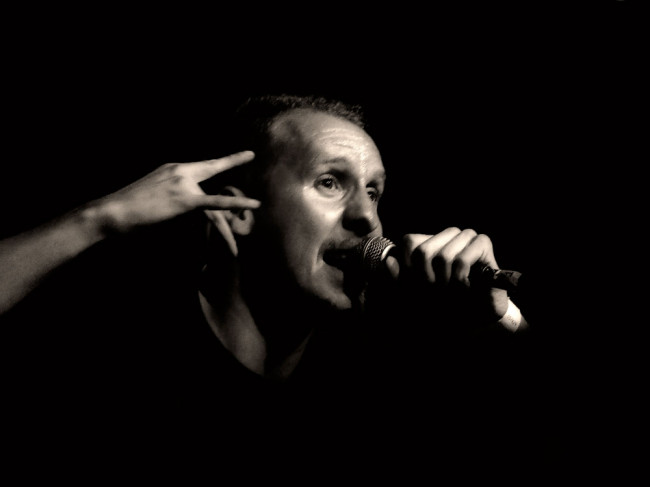 Opening The Blurst of Times’ fourth iteration at The Foundry is an exceptionally powerful performance from Brisbane’s 100%. Melding synth pop to harder-edged industrial dance, the trio revamps some of the bleak allure of early ‘80s new romanticism. Casting a commanding stage presence, band leader Lena Molnar croons and smoulders between sudden moments of elevation. Backing her with an infectiously low slung mechanical groove are Grace Stevenson (Rebel Yell) and Chloe Baxter (Cannon). Anthemic closer Nikita projects a wayward allure, that couldn’t be anything other than the group’s own.  If their appearance establishes one thing it’s that Blurst remains true to its longstanding reputation for having one ear, at least, turned on to great underground music.

Sydney duo MEZKO follow. With a touch the honeyed harmonies akin to The Breeders’ Deal sisters, the pair complement angular fretwork with an abrasive electronic rhythm. The pair’s synthetic production provides an unequivocal invitation to dance the body. While they may not retain the momentum of their initial songs, there’s an undeniable magnetism that courses throughout.

Rackett’s campy zoot suits are a distraction, their true threat lies in their tight and energetic delivery. Visually there’s an echo of the rock goddess stature of Debbie Harry and Joan Jet, but the Sydneysiders’ music draws from a deeper wellspring of guitar-bashing rock tradition. Material like single ‘BATS’ and a number of songs from their soon to be released debut EP showcase that the group aren’t afraid of veering toward a visceral punk sound, albeit one laced with subtle flashes of bubblegum and power pop.

Yet another southern import, Jack River (Holly Rankin) draws a sizeable crowd within the smaller confines of Black Bear Lodge. Her sound builds upon bouncy indie rock foundation with a pummelling grunge edge, not unsurprising given her recent addition to the I Oh You roster of artists. Tal Bachman’s ‘She’s So High’ somehow works its way into the set and crowd erupts.

Stripped down to hard-riffing simplicity, local favourites Good Boy cause calamity at The Foundry. Love it or hate it, there’s always been a space in Australian music for back-to-basics rock. The group can shred to the high heavens, their material instinctively primitive but surprisingly catchy. While the trio are relative newcomers their adoring crowd attests that Good Boy bring a promising burst of energy to their longstanding domain.

No sooner do they exit than excitement mounts for Royal Headache. Shogun! He walks on stage. “Let’s do this.”  Backed by his uncompressing group, the frontman spits it out. He crouches, spasms and contorts, his face occasionally clenching in a wry and gnarly smile. High standards ‘Another World’, ‘Garbage’ and ‘Wouldn’t You Know’ see the crowd falling over one another in a mess of energy, affection and awe. Ragged punk and earnest soul convalesce, washing away everything that has come before. This is soul in the truest sense, earthly vocals sung from the heart. Royal Headache shatters perennial derisions of pop plasticism and blue-eyed soul which accost the genre’s revivalists. But then few if any contemporaries can match the directness of Shogun’s lyrical outpour. Thematically abrasive yet casually brilliant, there’s little question the group provides the festival its standout moment.