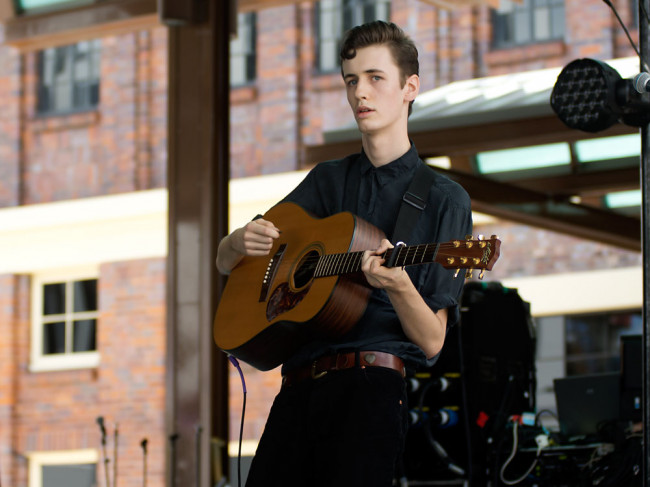 Later than expected, the week’s Best New Music.  Cutting the list down to a sensible number was a tricky task, with so many songs worth sharing but that will hopefully be able to be posted as album release dates approach.

There’s something Kate Bush about those vocals, especially in the chorus, so how could I resist?

A band who should be much bigger than they are, a real highlight of the day that time they played at the Brisbane leg of Laneway a few years back.  ‘Lately’ is the latest song from their upcoming United Crushers album but for (very) good measure you also get the sensational ‘Wedding’ clip.

This year’s Australian Music Prize isn’t announced for another week, but the new Drones album will be in next year’s shortlist.  The ‘best band in Australia’ tag doesn’t get attached to them for nothing.

The Goon Sax – Up To Anything (Chapter Music) – Release Date: 8 April

The press release talks about, and I quote, ‘spastic rhythms’. Are you even allowed to say that these days?

It’s like I Oh You are trying to make amends and seek redemption for forcing the Worst Band In Australia (DMA’s) on us.  I could almost start to think about forgiving them. Almost.

Every time I’ve received a Bleached-related email in my inbox, has been a good moment in my day.

CONTAINS STROBE LIGHTING. Take heed of this warning, they’re not kidding.  Sometimes I surprise myself by liking ssomething I wouldn’t normally expect myself to like.  Like this.

A new video clip from one of my favourite albums from last year.  Sufjanesque to say the very  least and it probably struck a chord because I was the only person on the planet to be disappointed with Carrie & Lowell.  It missed the female vocals.

I was disappointed when I realised the name of the band wasn’t The Light of Dead Stars and the name of the song wasn’t Beloved Elk.  Listen Rccords are a new label to start paying attention to.

Like a lot of new music, I got send this in a random email and at the time it had had 14 views.  At time of writing, almost a week later, it’s now got all of 16 views and at least two them have been from me.