The appeal of the WRONG! in pop music | 1 – Die Antwoord, Penderecki, Elvis Presley, Marina And The Diamonds, Tubeway Army 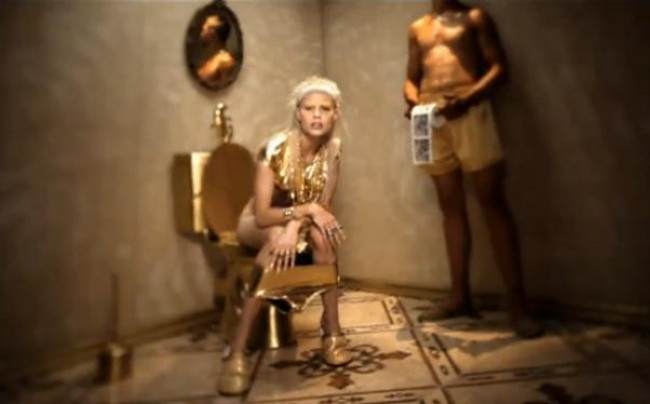 This series of blog entries is inspired by the final week of KMB003 (Sex Drugs Rock N Roll) this semester.

The original source was a lecture entitled “The Attraction of the WRONG! in Pop Music” (encompassing the Politics of Quirk). Several of these videos are student suggestions, made in tutorial and on Facebook. All of them in their own way, I feel, exemplify the notion of WRONGNESS in pop, for better or for worse. For, as Sir Ken Robinson puts it, “If you’re not prepared to be wrong, you’ll never come up with anything original”.

“wrong” like ending your song on an unresolved note? dissonant notes and syncopated rhythm? or like playing someone else’s song wrong and getting something original out of it? or being wrong looking? or being the wrong color or the wrong kind of person? hanging out with the wrong crowd? feeling wrong, but not really being wrong?

How about the concept of guilty pleasures – not where you’re embarrassed to be caught liking something because of peer pressure, but because it doesn’t fit into your own self-image. My entire life, I’ve never wanted to like Bruce Springsteen … I don’t like what I feel he signifies, his audience, the stadium rock experience, the *rock* … it does NOT fit in with my self-image …. but every time certain songs start up I CAN NOT deny the power of those chords, the thunder of the drums. I like Bruce Springsteen songs, even though I feel I shouldn’t. Clearly, I’m not the person I think I am.

(Notes for WRONG! lecture drawn from comments left on Facebook, and personal observation)

It’s the very wrongness of the following that makes them all so appealing. They are, at the least, memorable.

According to Pitchfork, Zef is a “policy of intentional ignorance and crassness”. Really? What the fuck do they know? Meet Die Antwoord, a rave-rap outfit from South Africa – easily the most popular choice for this list among students. Indeed, Die Antwoord try so hard to be WRONG in everything they do, it’d feel churlish to leave them out. “She’s taking a dump halfway through the song!” says one student. “Eminem did that too, but that was funny because it was Elvis Presley,” says another. “I had a nightmare where that skinny girl came into my room last night,” shudders a third. “She’s so skinny it’s WRONG.” There’s something really creepy AND alluring about the following. Me? I’m just digging the gold Catwoman look. And the fact I KNOW it’s wrong to do so cos I’m just buying into the dumbness. I can’t help it. I loved Bush Pig’s ‘Felching The Cat’ for the same reason.

Penderecki – Threnody to the Victims of Hiroshima (Animated Score)

Around a year ago, one of Isaac (then age 6)’s favourite songs was the sound of a “million swarming bees”, the György Ligeti pieces in 2001: A Space Odyssey that employ micropolyphony, the use of sustained dissonant chords that shift slowly over time (or so Wikipedia has it). It drove his mother up the wall. Hello Penderecki. Hello Threnody to the Victims of Hiroshima, one of the most startling, familiar and instantly likeable pieces of music I’ve heard in a long time. The final section where he utilises pretty much every WRONG note cluster possible sounds like a jet plane taking off. Writes one informed student, “Penderecki had to develop his own style of musical notation for this song and had one section of violins tune a quarter tone out and one section tune three quarter tones out”. Quite some video, too.

My favourite Presley performance, and I mean no disrespect to The King. Nowadays, fucking backstage cameras, iPhones and dressing room interviews are everywhere, but back then it was one of the  few times you could hear the façade crack and get a glimpse of the Man inside the Entertainer. The sincerity is tangible, and the way the backing band and singer (Whitney Houston’s mum, Cissy) keep performing is inspired. Very, if not entirely, difficult not to crack up yourself.

Quirky music is perhaps best defined as doing bad things elegantly.
Or perhaps elegant things badly…
The musical jokes are in both the narrative and the music.

It involves intentionally distorting aspects of musical elements, lyric and narrative structure and content and shifts in performance and style that are not expected or predictable. Alternatively quirk can be purely performative. The effects of quirk are broad: humour is common, discomfort can be a feature. Quirk can also be dark and ironic and in some cases just plain sick and twisted. It can be twee and uncool and sexually, morally and racially offensive.

Marina And The Diamonds – How To Be A Heartbreaker

So. Marina And The Diamonds. A fairly standard – if somewhat pleasingly against the grain – song that details how fun it is to be the WOMAN who’s sleeping around (usually the default ‘cool’ setting for male rockers), the video featuring a bunch of well-hung half-naked men cavorting around instead of the usual bunch of half-naked women. All to the good, and the song certainly boasts enough hooks and sass for me to immediately like it. (Immediately. Is there any other sort of attraction?) This is nothing particularly out the ordinary for female pop music in 2013, however, where female stars, hyper-sexualised or not, are encouraged to give off the illusion of sass and knowing sexuality and ‘independence’ (let’s not look too deeply into that right now). You take this song out of its context, though – pop music’s  relatively safe playground for experimentation wherein anything is approved as long as it’s entertaining – and place it within the Bible Belt mainstream of the American South … and you think this song would go down a storm there? Gain airplay, even? Really. Uh-huh. It’s totally WRONG.

The entire song was a mistake, a happy accident – not intended, never intended. It is WRONG from beginning to end. From that source of all things academic, Wikipedia:

Despite being over five minutes long and possessing, in the words of its composer, “no recognisable hook-line whatsoever”, the single topped the UK charts. Whilst the track’s distinctive sound stood out at the time, sales also benefited from the record company’s use of a picture disc and Numan’s striking, “robotic” performance on the TV shows The Old Grey Whistle Test and Top of the Pops.

“Are ‘Friends’ Electric?” features three different sections: a recurring “verse” with a synth riff in C and B flat, a recurring section with spoken word over slow arpeggiated seventh chords, and an instrumental break in F. The instrumentation is quite minimalistic: there is a conventional drum and bass guitar backing track, some additional heavily flanged guitar (particularly in the instrumental break), subdued vocals and, most prominently, a Minimoog synthesizer. These synth parts include a slow-paced sawtooth bass riff, and some soaring portamento background lines.

Numan stumbled upon synthesizers by accident. While intending to record a punk album, he noticed a Minimoog synthesizer that had been left in the studio. The keyboard’s massive sound became the inspiration for the Replicas album, and is the dominant sound for this song.

Inspired a great single, too.