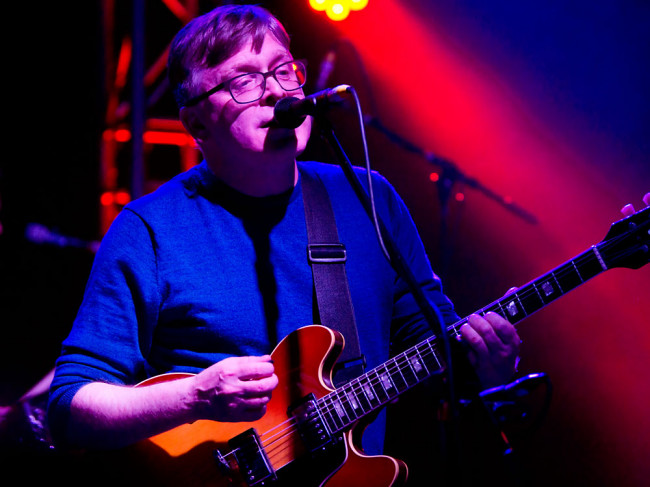 For all my years of Teenage Fanclub appreciation, I’d never seen them live. I’d mentioned to my partner as we were in the Uber on the way to The Triffid in Brisbane that the likely clientele would resemble myself – mid to late 30s, males, slightly overweight, probably nerdy and white (oh, so WHITE). I wasn’t wrong. And while I don’t really think of Teenage Fanclub as white men music at all, I do briefly think about why such a demographic is drawn to the chirpy guitar pop of these Scottish rockers. There’s probably a PhD in there somewhere, assuming it hasn’t already been written.

The Goon Sax meander on stage just as I grab two overpriced tins of beer from the bar. And while I’ve seen them play now countless times, they’ve recently begun to play newer material; and yet again, I’m astounded as to the quality of song writing from such a young trio. They’re charmingly apologetic as Louis breaks a guitar string during ‘Anyone Else’; they play through the second half of the tune with just bass and drums.

But it’s this earnestness that wins the crowd over, and the audience give generous applause after each song – even after James manages to break another string during ‘Sometimes Accidentally’, but the Teenage Fanclub guitar tech is generous enough to lend the trio a spare electric. Nearer the end, the band play a very honest newer song (name unknown) with James on vocals seemingly dealing with issues of depression, and I wonder if it’s the best one they’ve written so far. The Goon Sax prove a very smart support choice.

The room fills with the predicted demographic, and a five member Teenage Fanclub appear at a respectable 9:30 pm and immediately launch into ‘Start Again’ from Songs From Northern Britain. Smartly, the band keep the set list as a mix of well-worn crowd pleasers and a mix of singles from their 2016 record “Here” such as ‘Hold On’ and ‘Thin Air’, which appear early.

I’m personally happy when they launch into probably my favourite Fannies song ‘Don’t Look Back’ off the back of a proficient performance of ‘It’s All In Mind’, a song I never really loved on record but worked well tonight. At one point, Norman responds to someone’s repeated request for ‘About You’, with “oh, can you wait….<glances at setlist>…. about eight minutes?” to the crowd’s amusement.

Saying all that, there’s something a bit ho-hum about the band’s performance in spite of the fact that they appear affable and genuinely happy to be touring Australia once again. Now, I hate to be the dude who talks about ‘the sound’ mix as if I was teaching a class on production at Berkeley Academy of Music, but something seems slightly off.

Norman’s vocals were loud and distorted, and Raymond’s voice soft and difficult to hear even at the front centre of stage. It’s this weird instability that made the second half of their set feel uncomfortably too quiet – even for a band who primarily play upbeat guitar pop. I’m not surprised that I enjoy Gerard Love’s songs the most tonight, and I think it’s because they’re they only ones that sound balanced.

The set turns out to be mildly epic in length, the band going through about sixteen or so songs before ending with one of their most familiar tunes, ‘The Concept’ from breakthrough record Bandwagonesque.

A small break and the inevitable encore unfurls and the band, very conscious of which city they’re in, play a considered and well-received cover of Grant McLennan’s ‘Easy Come, Easy Go’. As they finish with ‘Star Sign’ and ‘Everything Flows’, I’m left with the feeling that the guitars should be burying me in noise during the latter, but instead leave hollow. Crank those amps to 11, Fannies! Us mid 30s white men don’t have the hearing we once had!