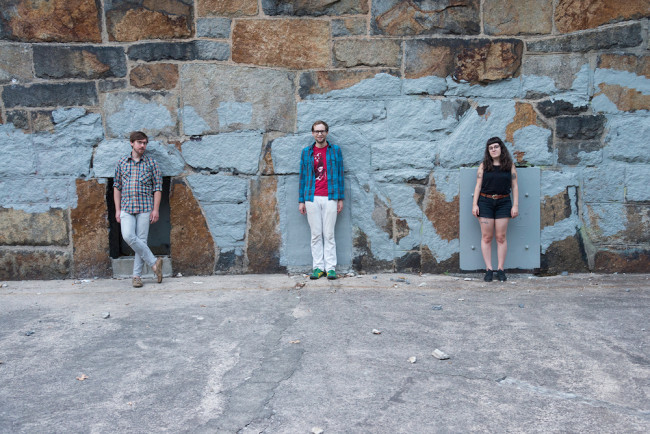 Say you’ve gone out to see a gig in a new town. You’ve arrived early, as is your custom, but already people are crowding the couches and milling in bunches. You don’t know any of these people. Your legs lock as you stand at the threshold, scanning for somewhere unobtrusive to sit.

Twenty minutes crawl by. A prime table up front, the book you brought, and the beverage you’re nursing (I can’t order your drink for ya, geez) have done nothing to calm your jittery nerves. Two guys and a girl set up on stage, cutting up and joking with each other.

So they begin. And they start with this:

Before long you’re standing, whooping, swaying, dancing. The minutes that crawled before whoosh by as the merry band bounce through their set. So, naturally, the minute the last claps die, you beeline for the rickety merch table and await someone’s return. One of the guys comes back, and you find yourself demanding every tape they have to offer. Whatever stray nerves had tied your tongue at first now loosen – and the guy, all too chuffed by your praises, replies in kind by telling you about the music.

And now you’re sitting at the merch table, and the other guy and the girl are sitting with you, and they’re telling you about their mutual love for Guided By Voices, and silly tour stories, and other stuff about their songs like:

So y’know when you’re walking down the street and it’s kind of dreary out
and a little drizzly? And then you go into a store to buy some beer, and
when you leave the store the sun has come out and it feels awesome but then
you spend too long staring at it and then all you can see is black dots?
That is the “What You’re Waiting” feeling.

“What You’re Waiting” was Matt’s excuse to write a song with a lo-fi intro.
When Matt first recorded the guitar solo, Zoë thought that it sounded like
bagpipes – Justin at Sonelab fixed that because he is much better at that
sort of thing than we are.

Imagine that. Yeah? Yeah. Listening to Halfsour is something like that: a big, grinning, impromptu welcome in a neighborhood bar. And when the music’s over, you’d rather sneak into the tour van with them than wander back home alone.