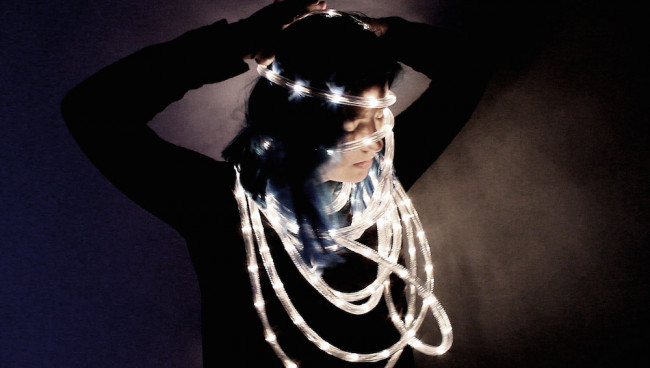 She’s not trying to stalk him. She just doesn’t know how to say hello.

He always arrives just before the first bell, dashing in to his locker by the band room. And Chelsea always slips to the water fountain, right at 7:55, just for a little glimpse. Someone’s usually there at the lockers waiting for him – the mousey girl with the glasses, or the perky dark-haired one that everyone assumes is Hispanic (even though her skin is fair), or the blonde chalky boy that speaks like a broken robot.

Everywhere he goes, someone else follows. Chelsea watches from ten feet away, as students trek in a mob up the hall to third period; from her hiding place by the theater she spies him and his entourage crossing campus to the cafeteria; she glances down the drumline during band practice, whenever the conductor drills the trumpets for the umpteenth time. He is never alone.

“Oh, yawn, girl. Get the fuck over it.” Stacy perches on the low brick wall, her little paunch jutting out over her crossed legs. Chelsea sits next to her, with her ginormous music history textbook still in her lap. She never knows when Stacy will find her. “So did ya listen to that Curve CD I gave ya?”

“Um. I think so,” Chelsea says. Stacy gives her lots of CDs, since clearly Emerson, Lake and Palmer and Return to Forever were “old folks shit”.

Stacy sighs, shaking her curly-haired head. “Look, you’ve got to give up this romance shit and give in to the music, girl.” She coughs. “Stiffs like that guy don’t know what’s real. They stick to their wanker rock shit and don’t know anything.”

“I liked that Massive Attack one,” Chelsea offers, meekly. Just the mention of it triggers the ghost beats again in her head, rattling as they did alongside the cliffsides and grease ropes in her physics questions. Sometimes she hears the woozy raps while she’s watching him down the hall. And she didn’t think she liked rap music, either.

“Oh yeah?” Stacy grins. “Well, I asked bout Curve, cos a friend’s gonna let me have this new thing from their producer dude. He says it’s kinda trip hoppy, so maybe you’ll dig it.”

“OK,” says Chelsea. The bell rings. She scans the passing crowd for his face.

“I’m telling you,” says Stacy as she hefts up her backpack. “get the fuck over it.”

Two weeks later, and Chelsea rests alone on her bed, with SPC ECO drifting across the room like frozen dust. She’s never heard a singer so strung-out on Autotune before. It reminds her of Massive Attack, but slower. Less hop, more trip, she thinks.

The other day, she found him in the alley between buildings, during fifth period, while she was sneaking out of PE. The dark-haired girl was waving her arms and yelling at him. Chelsea watched from in the hall. The next day, only his guy friends met him at the lockers in the morning, their faces grave and frowning.

SPC ECO thumped softly in her head when she trekked up the steep hall, eyes ever tracing him. He recoiled from his omnipresent followers, avoided each one’s gaze. Crowds surge and shift around him – and did he tremble as he finally turns a sharp corner and vanishes out the door?

At lunch, Chelsea sits on the low brick wall and waited for Stacy. She wanted to tell her how much she loves the CD, how it unveils new hiding spaces, how it suspended her in a candle-lit netherworld above and within her known desires. Her music history tome rested unopened beside her.

Nothing. No one. Just one fucking butterfly in the flowers. Chelsea sighed, put away lunchbox and book, and retreated to class, her back on the passing crowd. There are essays to write, after all.

The next morning, Chelsea didn’t visit the fountain at 7:55. She ate her lunch in the classroom, after everyone leaves. His name drifted in whispers around her in the halls, but she did not strain her ear. There was a vacant space in the drumline at band practice (and the conductor yelled at them more than usual). Chelsea kept her head down, and tried not to care.

So she rests now, on her bed, leaning back from the laptop and staring up at the spinning blades on the fan. Perhaps she’ll never know how to say hello. That’s fine. She’d lose herself in SPC ECO instead.