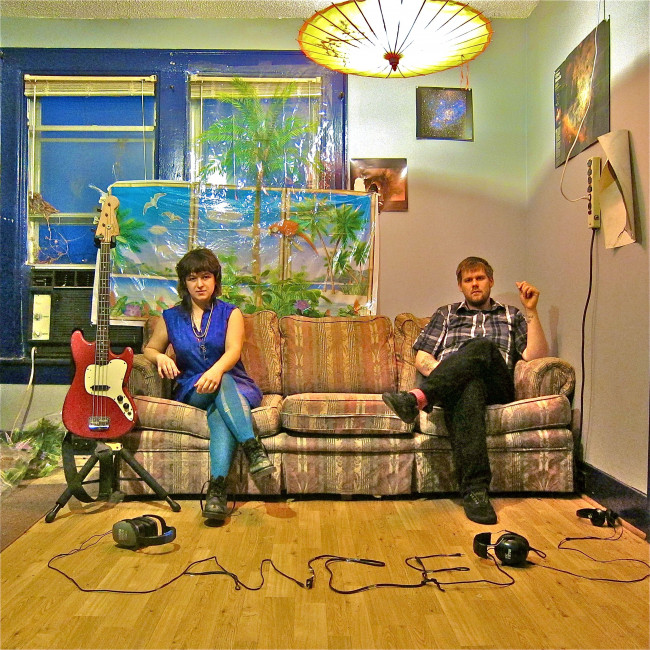 Ella invited me to the show. She found me as many people do – on Facebook, via a mutual friend. (Aside – this is also how I met my current landlord when my previous landlady, a psychotic control freak, was about to kick me out. Through the same mutual friend, in fact. I owe said friend something substantial. Like a kidney. Or peace of mind.)

So I left early, in part because I lack the nerves to be late, but also because I wanted to meet her. Alas, when I poked up to the house, three dudes with beer cans and one communal cigarette (?) were sitting out front on a garden wall instead. Thank god one of them recognized me, or I would’ve surely been shafted for at least half an hour.

Two or three different vans rolled in before I met Ella. Wasn’t hard to spot her when she arrived, though, since she wore a “CANCER” necklace and was graciously receiving birthday wishes left and right. But she and her gang played first, and so off she went to set up the gear.

Only after their bruising muscle-power pop set did I finally chat with Ella. First, of course, to praise the wicked show – the perfect opening act, with just enough sweet sweaty hooks to whet the appetite yet still light enough to leave the seasoned listener craving more – then to thank her for the invite. After all, in two hours I had met at least a dozen people; usually, at a venue, I tend to huddle in a corner and read until I find someone I recognize (which, more often than not, are other musos). That’s how it is, she said – house gigs are always better. That’s why bands from across the nation were flocking here, and nowhere else in Athens.

Besides, as Ella noted, some queer cluelessness held Athens scenesters like a plague. Anywhere else, she told me, these bands could attract hundreds, easy (especially Street Eaters – more on that later, but click that link if you’re impatient). Here, the names fell flat. That’s true, I said. The only names that I’ve ever heard amongst the college kids are Kishi Bashi and Disclosure. Little NPR heads, they are. (I never got to say that part.)

We could have gone on – but the next band was firing up inside, and I excused myself and hurried into the house. Didn’t see her again.

So here’s to Cancers. Here’s to discarded cassette tapes scattered in the passenger seat of your car, the buried underground of the 90s, and girls that can obliterate a crowd. Here’s to the blueprints that I know must exist, but can’t put a finger on, although I do know that this opener sounds like a steroid-pumped Pixies track – maybe – but mashed-up, black and blue, lightly breaded and with that sticky sauce that keeps us uncultured Americans crawling back to Westernized Chinese buffets. Yes yes yes. Total gut appeal.