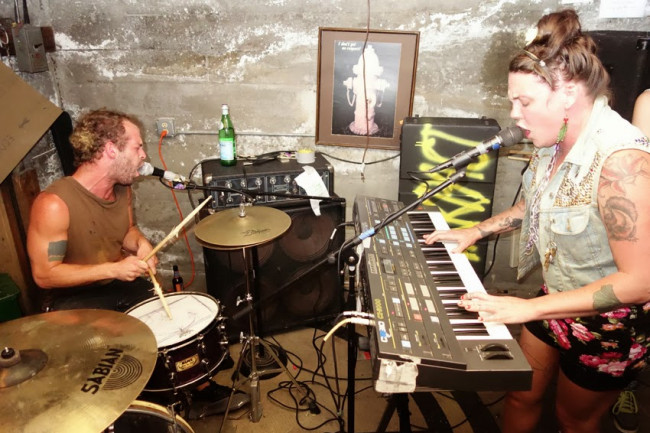 The bands were always up front. Always. Everyone admired each other. Some were even singing along. The sound system hiccupped before Dogjaw could barrel into their first tune, and two folks (among others) stepped in at once to help – one burly bloke inspected the gear, and a svelte lady brought forth a toolbox of wires. Cool, I thought. I wish I could be handy like that. And how great that the audience doesn’t just stand around and guffaw, as club-goers/bar dwellers do.

After Dogjaw totally crushed us, the aforementioned bloke hopped onto the drum throne. The lady brought in a huge case with “SHARKPACT” splashed on the front in yellow paint. A guitar? Nope – a synthesizer. Ooh.

Glorious, room-filling euphoria followed. She commanded those keys. Every drummer that night was ACE, every one of ‘em, and so this guy did not disappoint – flurries and flurries of head-pounding noise. I can’t make out a word, but the shouted harmonies soar.

I love how this number summons “Baba O’Riley” in the intro, then ditches the Who completely.

But if ya think Sharkpact sound wicked live, just wait until you hear them in the studio. Clouds part and golden light stabs the earth in towering rays. Radiant.

Go on – here’s the rest of the album. For zilch. Olympian label Rumbletowne doesn’t mind sharing – but drop something in the tip jar every once in a while, would ya?