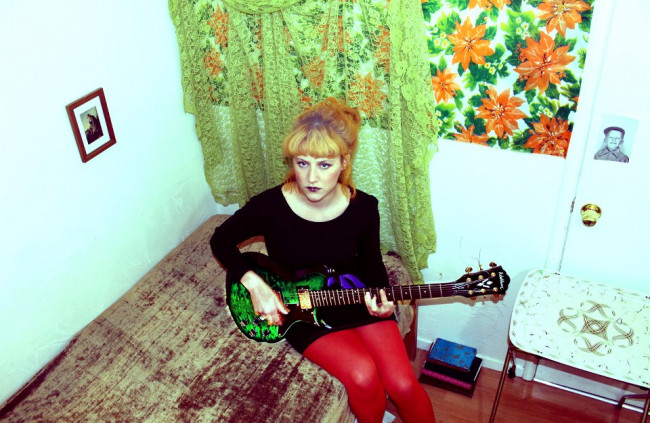 A recommendation from Tobi Vail. I can’t remember if she has form… um, for those late to this particular party, I’m joking… but it seems like if Ms. Vail is willing to forgo her natural aversion to Pitchfork and link to a Pitchfork TV video because she loves this damn band so damn much then the very least I can do is listen.

Gorgeous. Spooky and dislocated and with a circular guitar refrain that calls down images of… wait. There’s a Grass Widow connection. Is it me, or this a new sound going down in 2013? Some sound better. Some sound far worse. There’s shades and light and shadow: shade and lights and shadows that mean Ruby Pins feel partly hidden from view, scratching out her art in the half-light of companionship and…

It’s chilly out there: chilly and unwelcoming, and we all need some form of uniform against the furnace of cold and disinterest. There’s a hint of menace. Menace, and fishnet stockings (the two have always been linked in my mind: not an unwelcome association, not at all). Someone is smoking. Of course someone is smoking. Someone is wasting milk. Of course someone is wasting the milk. Look closer. You won’t see anything because that’s not how it works. “Stay true,” someone whispers during the ad breaks in Game Of Thrones and a growing groundswell of support calls back. Stay true! STAY TRUE! (Song of the day – 597: Pins)

I’m not asking for originality. I’m just asking for more. I want to hear one influence that isn’t already pre-approved by a bunch of old white dudes. I want to hear one influence that isn’t already part of the accepted canon — I can’t help thinking that if this were 1985 the critics falling all over themselves for Savages right now would be massive Whitesnake fans because Whitesnake sounded like Led Zeppelin the greatest rock band of all time, not like this Replacements/Husker Du/Minutemen/Mary Chain bullshit. Meet the new orthodoxy, same as the old orthodoxy only this time with better taste. (Or is it? I’m starting to wonder.) (Savages – Silence Yourself (Pop Noire/Matador)

(Savages have one great song, btw.)

Ruby Pins is the recording alias of Lillian Maring, best known as the drummer from Grass Widow. On her debut for Portland label M’lady’s Records, she layers her voice and instruments with effects, creating a magical, psychedelic backdrop over which she unleashes personal angst and articulates her politics using humor and vivid, nuanced storytelling. The record is an introspective masterpiece that also manages to feel whimsical and free.

You’re no dullard, though. You can only hear a most feeble connection between the three songs thus mentioned. I don’t apologise for that. I’m just trying to capture a mood, a nagging insistence. A palpable sense that life is never quite what it seems, that there is magic to be found in even the most awkward of places.

I don’t know if you’re the sort of person to be bothered by this, but Pitchfork only gave the Ruby Pins album a 7.0 (no Best New Music, which I actually thought was mandatory for any new music). Doubtless, it got downgraded a couple of notches for having been created by a female. What would you rather trust, though – a recommendation from someone whose taste you know and trust, or from a website that refuses to acknowledge its power?

Here’s the pull quote for the bully boys: