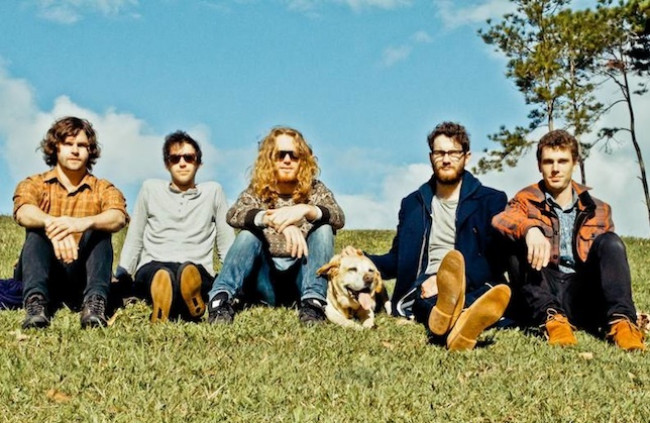 In Brisbane, the problem is that familiarity doesn’t so much breed contempt, as content.

Nothing against the man personally – I have the utmost respect for Robert Forster as a songwriter and performer – but I can’t help noticing that anything which comes with the Forster Seal of Approval usually turns out to be anodyne, vaguely left-of-centre, pop. Music that’s fine to play in polite company and in the background at barbies. That’s twice I’ve used the word ‘anodyne’ when describing my prejudices about The John Steel Singers so clearly I have a self-image problem. What can I say? They have one too many beards. No one under the age of 30… strike that, 50… should be allowed to grow a beard. Unless they’re female.

On the one hand, this new song sounds like a Britpop band circa 1993, eyes struck WIDE OPEN by a sudden influx of Neu! albums, all fuzzed-out bliss and motorik know-how.

On the other hand, well – there’s this comment on Mess+Noise.

Nice way of putting it. Sunny QLD krautrock. So close to an oxymoron, and two ‘genres’ which very possibly should never be allowed to cross-pollinate… one thinks… but, yeah I like it. Familiarity breeds content. Rainbow Trout-rock. Sometimes commentary counts. Ask anyone who inhabits the message boards at Drowned In Sound:

Every time I come across Collapse Board it always strikes me as a sort of rogue state peopled solely by keyboard warriors… the writers who write for it don’t seem to write for anyone else and they all seem incredibly worked up about things that normal people would probably try and rationalise first.

I do not take the above as any sort of insult. The contrary, in fact. Sometimes, I wish I were a normal.

The only sort of respect worth a damn is grudging.

And the video stars Collapse Board favourite, d-wizz.