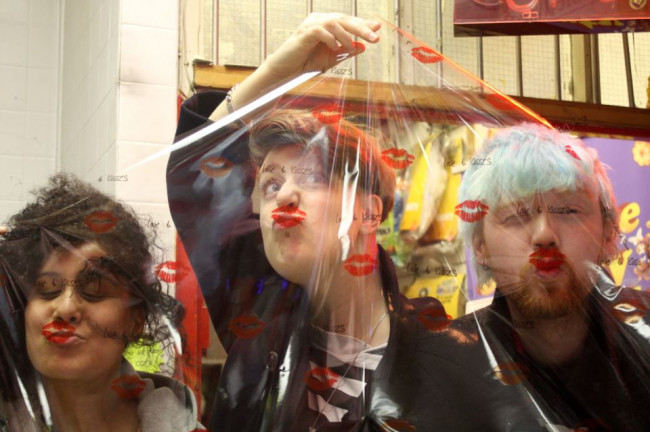 There was a band on kill rock stars a few years back called Shoplifting. This ain’t them. They sounded like this:

Polyrhythmic dissonance that reminded me a little of Erase Errata: music steeped in the female tradition, and with the abrasive edges left unpolished. A couple of them went on to be in some other bands I also dig muchly. For example.

Fast forward to Twitter this morning, and a message from this blog here.

“I bet you’d love a bit of Shopping.” And they’re right! I do. This Shopping sounds … well my contact’s description of them being a cross between Gang Of Four, Au Pairs and The Slits ain’t that far adrift, except that this would (by reduction) make them either Delta 5 or ESG, neither of which I’m going to object to. I mean (shrugs), to these ears it sounds like this Shopping sound a fraction too reverent of post-punk (I’m always suspicious of any band that can be so obviously categorised), but give ’em time, I reckon. They’ve got energy, attitude, a spark. Let’s see if they turn into a Savages or a Divorce.* I know which side of the line I’ll be cheering from.

From London, I believe.

So. I tried to do a little research on Shopping. You know how hard it is to research a band called Shopping on the Internet? My research did throw up this article, though.

How To Be A Riot Grrrl (or Boi)

1. Be prepared to live, breathe, eat, and sleep Riot Grrl. It isn’t a fashion statement. You can’t wear it for a few days. It isn’t a music genre you can merely dabble in. You must devote your life to Riot Grrrl and live it. Sure, you are allowed to have other interests, but you can’t “act” Riot Grrrl. It must be who you are.

Well. That’s bollocks for a start. Who’s demanding this level of allegiance? It isn’t a fucking religion or sect. It’s a way of thinking perhaps. And who came up with the absurd spelling “Boi”? Some jeans manufacturer with no fucking grasp on anything, that’s who I’d imagine.

3. Support everyone. So you’re a feminist but you aren’t Riot Grrrl unless you can embrace gays, lesbians, transgenders, pansexuals, bisexuals, or any of the like. Everyone has the right to live their life how they want and you must respect everyone. Stand up for your beliefs, but don’t preach. No one likes a preacher. (The only exception are haters. Feel free to tell those haters what you think of them.)

Bollocks. Who the fuck are these people inventing rules for everyone else?

5. Live your life, not anybody else’s. The world around us is full of images that tell us who we should be and what we should do. Ignore it. You’ll encounter lots of people who will try to make you be someone, but you can’t be anyone but yourself. Embrace what you have and do what you want. You are perfectly good as you are and you shouldn’t change that to suit anyone else.

7. Listen to the music. Some good bands to start with are Babes in Toyland, Bratmobile, Bikini Kill, Huggy Bear, and the Lunachicks.

*I made that comparison before I discovered Divorce share a label with Shopping.