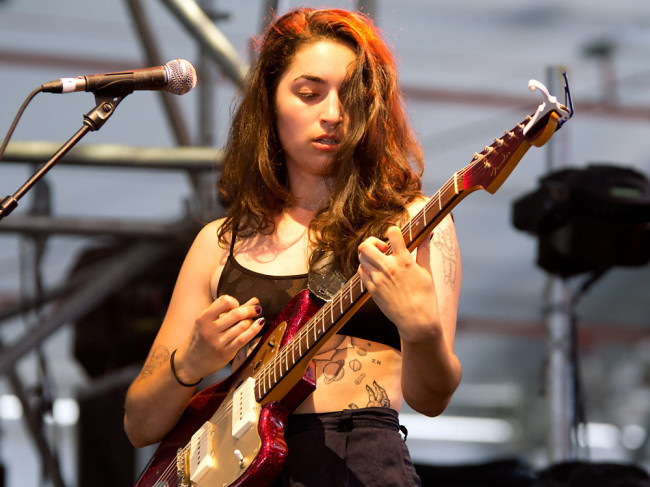 Back in November when it was released, I set up a draft post for Camp Cope’s ‘The Opener’ but, as with so many drafts, I didn’t get around to finding time to write some words about it and so the moment was missed.  I probably should have just posted up the lyrics and declared it the most important single of 2017 and them as the band to watch in 2018.

Treat them like queens until they disagree
And never reflect to think ‘wait, maybe the problem was me’
Nah, man, just keep smoking weed
Tell this one ‘yeah they were all crazy, unlike you baby.’

Tell me that no one knows me like you do
And tell me that my friends don’t tell me the truth
And maybe I’ll come crawling back to you
Like, that was your plan, right?

You worked so hard but we were ‘just lucky’
To ride those coat tails into infinity
And all my success has got nothing to do with me
Yeah, tell me again how there just aren’t that many girls in the music scene

“Yeah, just get a female opener, that’ll fill the quota.”

Given what’s happened over the last couple of days, it’s an inopportune moment to revisit the song as it’s become even more relevant.

At the Byron version of the festival, Camp Cope called out the organisers for the lack of female musicians on the bill, adapting the lyrics to ‘The Opener’ to suit the situation. “It’s another man telling us we can’t fill up a tent, it’s another fucking festival booking only nine women.“

The Falls Festival organisers responded with the following statement:

“We book the best bands available at the time of booking taking gender balance into consideration, which can be challenging.

“Whilst we have a very conscious and strong agenda to book female talent, it isn’t always available to us at that headline level. We have a long term strategy, which is present on this year’s Falls line up, of giving opportunities to new and middle range female Australian artists, to nurture and grow the future pool of female headline options.

On one hand, the organiser’s response is incredible, and especially that final paragraph.  Don’t like it, lump it. Put up or shut up. Shut up and be grateful for the opportunity we’ve given you to play our festival. If you think you can do a better than us, off you go then.  The reaction is almost like a Australian music industry equivalent of the vile “Love it or leave” slogan that you depressingly see all over Australia.

On the other hand, it’s the totally expected response: it’s what ‘The Opener’ is all about.  What the last couple of days has proved is that the sexism and misogyny that the song highlights isn’t limited to local music scenes but goes to the very top of the Australian music industry.

As has been pointed out time and again on this website, the golden rule of the Australian music industry is that you don’t criticise anything.  You’re expected to smile politely and pretend that there’s nothing bothering you.  You criticse at your peril.  We know this well having been blacklisted by a number of major Australian music industry participants over the years for refusing to play ball.  This is the crux of the problem; in Australia you can have principles regarding the music industry or you can have a ‘career’, it’s difficult to have both.  The industry is dominated by a small number of big players and they control with an iron fist and with the use of fear to maintain their dominance. You play by our rules or you don’t play at all.

On social media, Camp Cope have been getting massive support, as you’d expect.  What’s interesting so far is the lack of solidarity from the established Australian music industry, its musicians or (as far as I can see) any of the other acts on the Falls Festival line-up this year.  As the cliche goes, their silence is deafening but they’re more worried about their lovely long-term music biz careers than they are for making a principled stand.  High profile musicians who have show their support to the band (so far) include Urthboy, Briggs, Holly Throsby, Kira Puru and Alice Ivy (who’s signed to Dew Process, the same people behind Falls Festival which might make for some interesting meetings ahead).

Respect to Camp Cope. I hope this mess gets em 10000 new fans. Aust music is so much better for their courage ✊️

Camp Cope are fearless. Such an important voice. Folks should take note, if only everyone was this honest. @slthomthom @GeorgiaMaq @sideshowkelso

Mate if you think it's actually "challenging" to book a more gender balanced main stage lineup then quit ur fkn job, you ARE the problemhttps://t.co/YzC9bYrEF7

Unsurprisingly the MRA Man Babies have waded into the discussion in the typically embarrassing way you expect.  The idiotic comments have included one that has been since deleted from Melbourne all-male trio The Basics (whose line-up includes old Collapse Board favourite, Gotye) that proves without any doubt that some grown men,  who should know better, really don’t get it.

Camp Cope’s second album, How To Socialise & Make Friends is released on 2 March. The national tour dates in support of the album have already been released (Collapse Board favourites Chastity Belt are supporting), with the band playing at The Tivoli when the tour comes to Brisbane.  Given the massive crowds I’ve seen them pull at the big festivals, it wouldn’t surprise me to see them playing the Riverstage by the end of 2018.

With the patronising tone of the Falls Festival organisers’ response, I really hope they take on the gauntlet that’s been thrown down by them and put together a better festival than the lacklustre sausage fests that Falls and most of the other Australian festivals continue to put on.  To be honest, I don’t think it would actually be that hard to do.  Camp Cope have the groundswell of support to back them up all the way but whether they do or not, they’ll be the band that everyone is talking about during 2018.