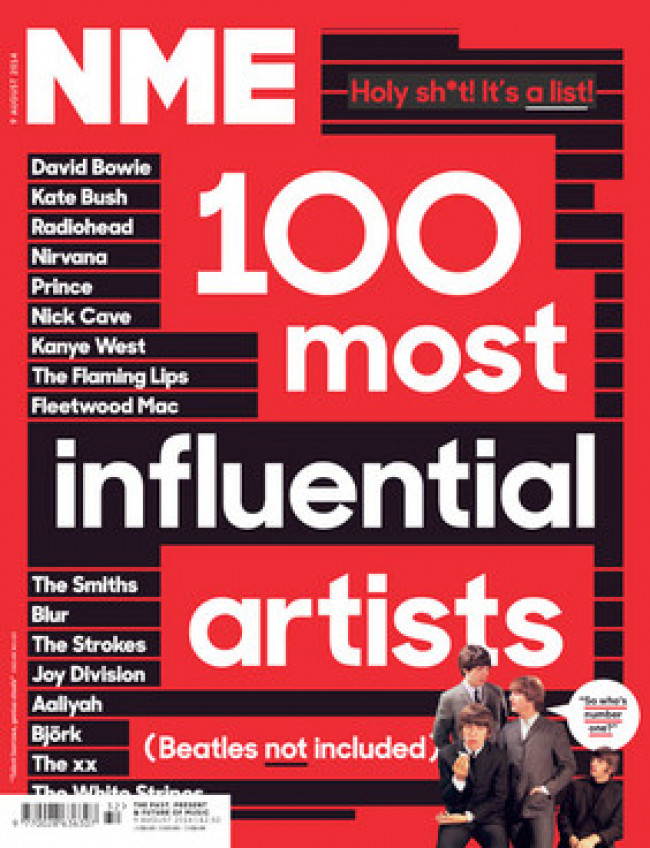 As we all know, I’m just a hack when it comes to music criticism. Not one of those professional, illustrious NME editors at all. However, I can say that I know a thing or two more about sample selection and “science” than the self-righteous blokes ($10 wager that they’re ALL blokes) who compiled this so-called “100 Most Influential Bands” listicle stunt. (Oh, screw the lower ranks – skip straight to the Top 50 here.)

Why do we need to discuss this? Well, we here at Collapse Board advocate responsible music criticism. And few stunts can be as irresponsible as cobbling together some power rankings intended to define a new generation and leaving out the most “obvious” (read: the biggest white, male rock and roll vanguards) answers. Especially when you’re the fucking NME.

On the one hand, I get it. You can’t argue that the young’uns’ digital caches look much different (in content and form) than their parents’ record piles. I mean, doi. And, while we can (and inevitably will) debate the hierarchy established in said list, you really can’t deny that, yes, Radiohead single-handedly rocked the popular soundscape of the 21st century. I won’t touch that #1 ranking.

However. We canMr. Beaumont described their method:

An entire week of work experience students left the office thinking that cutting-edge music journalism in 2014 mostly involves calculating which bands have been mentioned most in NME in the past two years, then hunting out references to the bands that influenced those acts online and finally adding up the number of times each influence came up.

Now, this at least clarifies two things: 1). We are dealing with an observational study, and analyzing texts to reach a conclusion; 2) when the editors say “the most influential artists”, they mean “the artists that have been mentioned the most by the most critically acclaimed recording groups and artists from the last two years”. OK. So we’ve defined our population. In any research project, you’ve got to define who or what you’re actually studying, or the results mean nothing. Case in point – if I tell you that breast cancer is the deadliest cancer, you should ask me, “oh, yeah? In what country?” And “in men or women?” And also, “among which age group?” The risks for developing cancer differ among age brackets, gender, and location, after all.

Now, to make accurate observations about a population, you have to draw a sample that represents the greatest proportion of that population. And herein lies one crucial flaw in the NME’s method – are the bands mentioned in two years’ worth of NME issues an accurate representation of the most critically acclaimed acts of the last two years? And, furthermore, when a musician namechecks artists X, Y, and Z in a given interview, do we take those as the final “influences” of that individual, when artist X may in fact be a composite carbon copy of artists A and B? (Substitute X for Tame Impala, #40, and A & B with Cream and Derek and the Dominoes, who aren’t in the upper tier at all.) And what if that individual forgot to mention artist T on that particular interview?

Already the notion of “science” in the NME’s method seems quite flimsy, indeed. But the next two passages obliterates it entirely:

This gave us a rough list which our editorial team – heads swimming with all of the bands that Wolf Alice (or whoever) have raved on about over 4am ciders – then took to the pub, tore into shreds, fought and shouted about and finally reconstructed in the rundown of 100 you see in the mag today.

“For this issue, we’ve benched the Beatles, the Stones, Dylan, Elvis, The Who, the Kinks, The Beach Boys, and the Sex Pistols…”

If that sounds ridiculous, well, perhaps I picked a stupid example, but it should sound ridiculous (and, honestly, isn’t that far off from Mr. Beaumont’s opening statement). Usually, statisticians throw out the answers that were mentioned the least, since those answers don’t represent much of the population under study. If you ask a bunch of 50-something Americans, “Would you say President Obama is doing a good, fair, or bad job as President of the United States?” you’re likely going to receive a very small number of “don’t know” responses. To ignore the more popular responses is to deny what happens right before your own eyes.

But for those who argue, ”No, those exceptions were determined before they started counting”…well, isn’t that a little arbitrary? If you strike out the Pistols, why not also exclude, from the same scene the Clash (#14); or, in the same era, David Bowie (#2) or Led Zeppelin (#41), who both persisted much longer and accrued much more fame and money?

I dunno. On a scientific level, the list doesn’t hold together; on a subjective level, it’s riddled with poor decisions. We could pick out unworthy entries ‘til we’re blue in the face, but one ranking glares out like a LOL in an academic essay – check out #6. The Gun Club. Don’t get me wrong, I think they’re a hoot – but would any one of you NME editors care to tell me with a straight face that more artists mentioned the Gun Club than Nirvana (#25), My Bloody Valentine (#36), Joy Division (#13), the Velvet Underground (#16), Sonic Youth (#22), Pavement (#32), the Pixies (#28), the Smiths (#11), Kraftwerk (#37), Bruce Springsteen (#29), Fleetwood Mac (#26), or the Cure (#99)? It’s like you’re just BEGGING for trolls to prowl your comments box. If you’re going to bedazzle us with your breadth of post-punk/rockabilly know-how, you could at least defend your selection instead of just plugging in one (unattributed) quote.

Anywho, that’s it for me. Your turn.