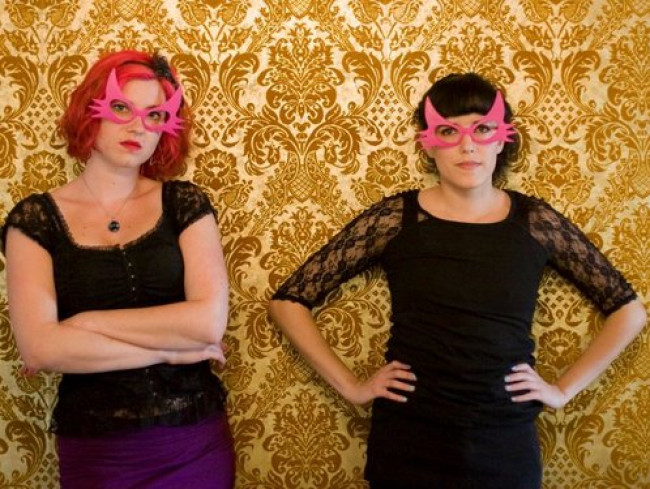 Bay area surf-trash-garage duo Dark Beach are parts the Mummies, the 5,6,7,8’s, Shonen Knife, and a dash of Blast Off Country Style. Dark Beach have all your B-movie fetishes covered from “Scream Queen,” “UFO,” “Swamp Girl,” and “Shark Attack,” they know their audience well.

Melissa Dale on drums and Faith Gardner on guitar and vocals come off like castaway mermaids from Weeki Wachee [a theme park in central Florida with performers who dress up like mermaids performing under water while getting air via hidden hoses staying under water for up to twenty to thirty minutes at a time – I’ve seen it and it’s crazy camp like you wouldn’t believe].

Dark Beach is a sequin-and-mirror-encrusted dressing room trailer for those mermaids. It’s all glitz and glamour shining like it’s Christmas, but underneath you get the sense of the salt water soaked carpet, the ants that won’t go away, and those traumas built up over the years that will never drown. They never let it get them down though, one punky garage stomper after another telling story after story of women in pulp-style danger, not just as the victim but as the heroine as well. I knew I was the kinda chump to fall for a single like this when I saw the sleeve which I could tell was designed by Stagnant Cult.