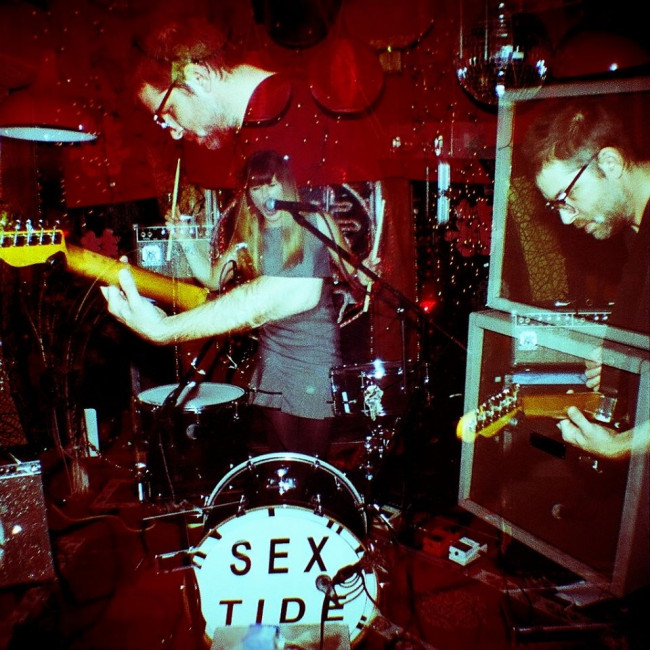 If this vinyl offering is any indication, Sex Tide have clearly been drinking from the same polluted waters of Ohio that have spawned countless warped noisemakers performing their own sort of deconstructed CPR on the corpse of rock’n’roll – from Devo to The Cramps to the Thomas Jefferson Slave Apartments to Times New Viking. The Columbus trio’s messily no-fi garage stomp is straight out of the Lux/Ivy League & makes your average neo-Nuggets band sound like Steely Dan by comparison, with stand-up drummer Aurelie Celine hollering over the twanging & stuttering dual-guitar racket like Moe Tucker after her initiation into a leather-coated girl gang.

These are songs that have been stripped down to their roughest, most skeletal basics, without unnecessary extravagances like a bass player, or cymbals, or a VU meter that doesn’t stay pinned in the red. Fuck that noise. And you’ve got to hand it to Sex Tide, because you can tell that they really know their history – if you’re going to record a seven-songs-in-20-minutes suite of acid-casualty garage scree, you’d better go analogue all the way, recording it on quarter inch tape (presumably in a cave) and mastering it like you’d never even heard of a computer. The magic of that authentic filth rubs off particularly on the wobbling, feedback-kissed ‘Laudanum’ & the tom-thrashing, snarling barnburner ‘Shakes (She’s Got)’.

By nature of being scuzzy, off-kilter and from Columbus, I imagine that there will be many lazy parallels drawn between Flash Fuck and some of the key players in last decade’s shitgaze non-phenomenon of blown-speaker anti-pop that found its epicenter in (obviously) Ohio. And they would be lazy, because unlike Times New Viking’s starry-eyed Flying Nun idolatry buried in tape hiss, or Psychedelic Horseshit working the transient random noise bursts with bong smoke angle, Sex Tide’s primal howlings owe more to the groovy hate fuck attitude of Pussy Galore, or The Cramps before them, than anything to surface yet in this millennium. They’re hardly reinventing the wheel, but they are joyously throwing thumb-tacks underneath it, which is way more fun to watch.