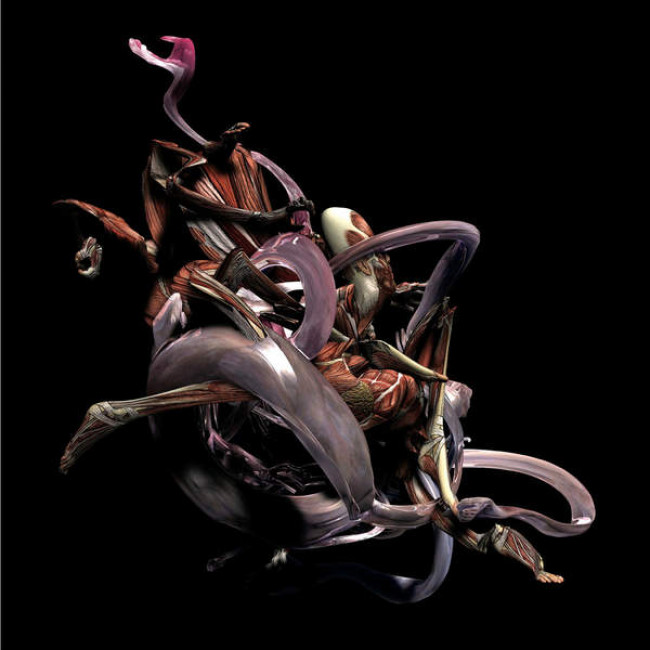 I’ve been a little sleep-deprived & out of focus lately and the news is a horror show filled w/lying sociopaths and so much abundant sadness that it makes the cloying relationship troubles of a band like Chvrches sound, at best, cloistered & obtuse. If anger is an energy then I guess passivity is a type of death. So all these opinions are filtered through heavy sedentary layers of ulcers & crank and should be taken with massive mountains of margarita salt. May our dead god have mercy on this breaking mess of a country.

All albums scored on the 0-1 binary scale as pioneered at Collapse Board, because we are living in a binary world and I am a binary girl.

And remember: doubt is a necessary precondition to meaningful action.

ALBUM OF THE MONTH:
Mykki Blanco – Presents C-ORE (!K7 / Dogfood)
You can call it a compilation, but it’s more like a collective, or a creative commune, collaborative & cultlike and that’s just the C’s. This takes everything people said Yeezus was and actually does it. In love with scuzz & noise, with texture & death, consumed by horror at our existence, and yet it’s so goddamn beautiful even as, especially as, it tries to be so ugly. A bunker of darkness that teeters on the edge of nihilism because it’s afraid to hope out loud, and as such it’s the album of the month for a month such as this.
Score: 1

MISPLACED HYPE OF THE MONTH:
Chvrches – Every Open Eye (Glassnote)
Still waiting for this band to write a melody I can remember five minutes after the song ends. And then there’s the lyrics, which read like someone fed SClub7 & Donna Lewis into a random text generator until it puked.
Score: 0

Ought – Sun Coming Down (Constellation)
Last year’s debut didn’t connect with me—the singer sounded like Clap Your Hands Say Yeah! and it’s still too soon for any of that—but this one is so much better that I had to go back and make sure this was the same band. Basically, the singer impersonates Mark E. Smith this time, but ‘Men For Miles’ recombines the DNA of Fall/Strokes/Fugazi into something special, for lots of reasons but especially b/c a line like ‘Excuse me, would you say there’s a chance of bringing this whole fucker down? Get down.’ makes my heart so swollen my ribcage threatens to break. Lyricists out there should note that if you remove the first two words, or the last two words, of that line, the effect would crumble. But of course words can’t do justice to the grain of the voice, the infected inflection. So many of us are always/already fucked into oblivion and this is the perfect soundtrack for our psychic hermitage. Or maybe I just need this right now and the album actually sucks.
Score: 1

Miley Cyrus – Miley Cyrus & Her Dead Petz (Self-released)
Missed this last month since it got surprise-released on the last day of August. Of course it’s a mess, and thank god for that. Everyone wants to follow the rules these days, demonstrate their enthusiasm for coloring inside the lines. This girl knows sometimes you have to get gone in order to get where you’re really going. Like Prince Hal she’s carrying around a bushelful of gifts that she can cash in any goddamn time she chooses. In the meantime, ‘Pablow the Blowfish’ ripped my heart open and fed it to me the very first time I heard it and for this I will always be in Ms. Cyrus’ debt.
Score: 1

Empress Of – Me (Terrible)
Bjorkitis is the disease wherein a singer is blessed with such a ‘good voice’ that they short-arm the whole lyrics/melody part of songwriting. The foremost symptom of Bjorkitis is boredom in the listener.
Score: 0

Micachu & The Shapes – Good Sad Happy Bad (Rough Trade)
Not as sonically mind-blowing as 2012’s Never, this is the sound of someone coasting, a clearing of their throat. Interesting that what sounds like a full-band jam session has created her most insular, casual, slacked-out record yet–a brilliant artist just chilling out and relaxing. Good for her, I suppose, but less good for the listeners. Thankfully, even at her most dead she’s still more alive than the rest of us.
Score: 1

Julia Holter – Have You In My Wilderness (Domino)
There’s always been something in Holter’s delivery that I’ve found unbearably pinched, and it makes me unable to hear her music as anything other than tuneless, shapeless, and meandering–all that psychic pain filtered through uncountable layers of smug psychic gauze. But people whose taste I admire keep saying how great she is, so maybe the problem is me. Research shows that we both grew up in California, but I bet our experiences were wildly different. So maybe that’s it.
Score: 0

US Girls – Half Free (4AD)
That valley she’s damning in the first song must be the uncanny one it feels like I’ve stumbled into whenever I listen to Meg Remy’s songs. Her music is this weird quadrillateral yin-yang symbol where Heat/Ice and Distant/Close plays games of intersection & separation. Easy to like, sometimes very easy to like, but difficult to love. And ‘Telephone Play No. 1’ will make you glad there isn’t a No. 2. Although it gets bonus points for being a feminist version of the intro to ‘Bitchin’ Camaro’. (Public Service Announcement: One of the worst live performers I’ve seen.)
Score: 1

Lana Del Rey – Honeymoon (Polydor)
My favorite part of Baz Luhrman’s Gatsby remake was the soundtrack. So many of the artists—Jay-Z, Jack White, Will.i.am—embody the Gatsby myth of self-created money built on bullshit & hustle almost as much as the movie’s titular character does. But the former Lizzie Grant deserves her own Great American Novel. This album makes good on every promise she ever made; only problem is she never promised much besides beautiful noir. The album’s way too long and slow (and so are the songs—all of them over 4 minutes), but still, each one is a stunner on its own.
Score: 1

New Order – Music Complete (Mute)
What I don’t understand is why Paul and Ringo don’t just go on tour and call it The Beatles. The nice thing about sports is it eventually becomes obvious that the athlete can’t compete anymore and they’re forced to retire. In music, you can keep churning out mediocrity forever and no one will call you out on it (critics won’t, at least). So here’s how you can tell a band that’s been around forever is wasting everyone’s time: when critics start writing that a band’s album is ‘The best thing they’ve done since ______’ and _______ came out over 15 years ago. For example, ‘Bowie’s latest is the best thing he’s done since Scary Monsters. Or, ‘You’d have to go back to New Adventures In Hi-Fi to find an R.E.M. album this great.’ Anyway, the consensus on this one says is their best album since Republic, and everyone knows that album sucked aside from ‘Regret’, so I wouldn’t buy this piece of shit even if people were saying it was ‘their best one since Technique’. Which nobody is saying. Because it’s not. Because this sucks.
Score: 0

Battles – La Di Da Di (Warp)
Give me some dense experimental fiction and I’m happy as a meta-pig in intertextual shit. But when I feel my brain start working itself into furrowed piles while listening to music, I find myself shutting down. This record is fucking exhausting. Music as athleticism—degree of difficulty, excess of testosterone, and olympic precision. The drummer in this band probably brings a personal trainer/life coach on tour with him. I can appreciate the technical ability, but it’s important to remember that technical ability has nothing to do with making great art and is also wielded as a fascist sword to keep the amateurs & marginalized on the sidelines.
Score: 0

Blank Realm – Illegals In Heaven (Fire)
Does the republican party know about these illegals? I wish these guys were more popular so I could hear a presidential candidate propose building a militarized fence around heaven patrolled by murderous drones & underpaid non-union guards in order to keep Blank Realm from sneaking in. Unlike some records this month, this one sounds like the people involved actually give a shit.
Score: 1

All reissues get a superenthusiastic 1 b/c it’s bad enough sifting through the shittiness of the present.

Billy Synth & the Turn Ups – Off The Deep End (Mind Cure)
Billy Synth – We Have Got To Make It On Our Own: Collected Tracks ‘78-83 (Mind Cure)
Like a sexed-up, glammed-out version of Chrome, these pair of reissues are total synthpunk heaven. From Pittsburgh, which with its cheap rent & northeast proximity is totally poised in the next 5-10 years to become one of the most vital scenes in the US. But if the industry’s still as NYC-centric as it is at the moment, I doubt anyone’s going to hear about it.