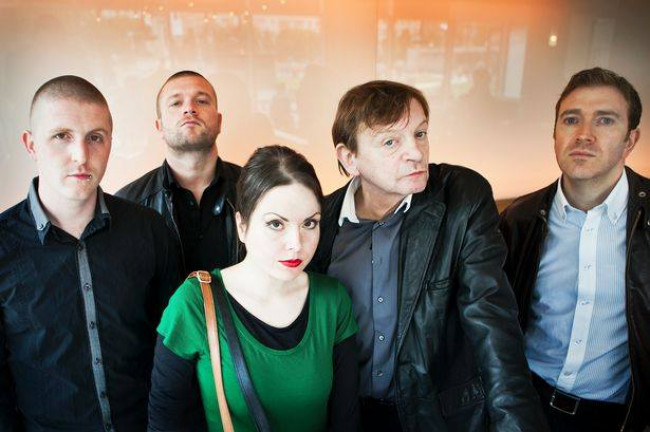 These are the first words discernable from the disembodied diatribe, but the personality behind them was perfectly clear when the first slurred syllable pushed out of the PA. The voice emanates vaguely from a stage semi-populated by tight-lipped musicians behind a spot-lit empty platform, but its presence is physical. People look, grin, cheer at the voice.

It used to be “he is not appreciated”. Wry and subtle, fake singing between the crap rap, probably taking the piss. Was it self-referential? Is this? This is blunter, meaner, harder. Is it complaint, imperative, or observation? Here he is.

It’s a bit like Bono’s catwalk turned sideways and it’s put to use by all of tonight’s frontmen. First the singer from Nite Fields gloomed along it, his band sounding huge as they do in big places like this, aptly soundtracking the tragedy that they’re about to have a hiatus or whatever. The singer from Gold Class curved and bent across it til you tilted your head sideways to follow his face, both body and voice striding a line between deadpan and melodrama. His band came to life onstage, straining and staining the clean edges of the sound that had left me cold on first listen to their hot tip album.
Mark E Smith arrives at work in his jacket, studiously adjusts his chugging band’s amp settings and microphone placements as he passes them, before mounting his pulpit, hands on hips and pouting into the air. Then he reaches back and mashes the uppermost notes of his wife’s keyboard while continuing, ever the professional, to look straight ahead and entertain his audience with song. It’s a singular sight and it’s all some people really came for or at least left with, some early, bucket list ticked.

Having put a face to the voice we can finally take in the band. They’re onto bouncy (“I’m not from”) ‘Bury’ and it shows their strong suit: pounding repetition and anthemically ridiculous group chants embroidered with subtle details – a keyboard line, snatches of melody, hints of personality (but “Don’t start improvising for god’s sake”) and a bit of swing. There are times when the repetition becomes too straight, bludgeoning, when you have to admire the drummer’s endurance but would love some dynamics, some of the air that makes the singer’s beloved Can so great for half hours at a time. But this group goes hard, nonstop, on a merciless mission to god knows what. Smith’s infamous interference with other people’s gear is more artful than most give him credit for, the stoic guitarist’s minute or so of piercing treble as fun as his cheeky guitar line in ‘First One Today’ off the new album.
Smith is mostly incomprehensible but for the odd surreal snatch, but he gargles with passion and venom, gesturing imperiously. At one point someone gives him a choc chip biscuit which he appears to welcome as another opportunity to confound his bandmates.
There’s more catalogue than you might expect, which isn’t much. ‘Theme From Sparta FC’ is a ripper; ‘Weather Report 2’ (the new ‘Bill is Dead’ for mine) is a classic. Final song ‘Mr Pharmacist’ is wild, everyone’s amp settings way out of whack, crowd thrashing, a sheer contrast to the sort of hits-by-numbers you could get with a band of this vintage if you’re not careful what you wish for.