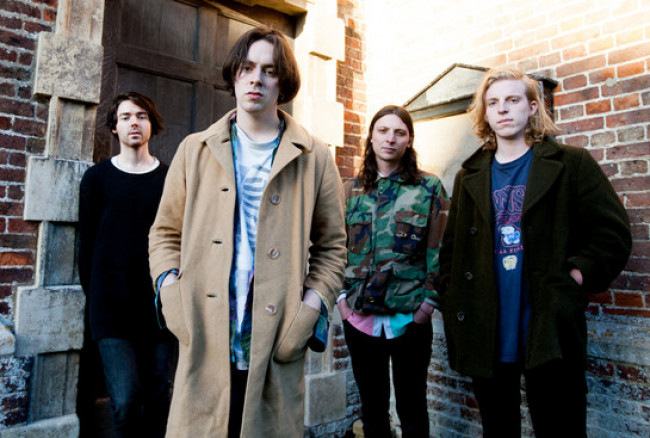 Reprinted from F.U.N.K. with permission

“I. Man’s perceptions are not bound by organs of perception; he perceives more than sense (tho’ ever so acute) can discover” – William Blake, There Is No Natural Religion

A) CAPSULE
Well of course this review is late, album came out weeks ago. I can’t earn a living out of writing about pop any more though, so I have to do my proper job first. It fucking angers me that this is the case. All apologies. Anyhoo here’s an old dead guy called F.R Leavis. He once said…

“The common pursuit of true judgement”: that is how the critic should see his business, and what it should be for him. His perceptions and judgements are his, or they are nothing ; but, whether or not he has consciously addressed himself to co- operative labour, they are inevitably collaborative. Collaboration may take the form of disagreement, and one is grateful to the critic whom one has found worth disagreeing with” – F.R.Leavis, initially quoting T.S.Eliot, ‘The Common Pursuit’

Here’s a new album from a new, very much alive band called Peace who the BBC and the NME and lots of other people paid to know and talk about music assure me is already one of the highlights of the year.

It’s called In Love and is one of the shittiest most shameful things I’ve ever heard. Apparently anyone who doesn’t like it is a buzzkiller – fine, some buzzes need swatting into oblivion and squishing against the pane, let me in a childish retaliatory fashion aver that anyone, and I mean ANYONE who does like In Love, should be instantaneously considered a cunt like they’ve had a good word to say about Thatcher. That’s not an overreaction. In Love is all bad all the time and Peace’s fans are all cunts all the time. ALL CUNTS. ALL THE TIME. 1 and a half out of 10.

B) YOUTH DEFENDERS
Now, I can hear some mealy mouthed motherfuckers groaning already: “Seriously Neil, what’s the point, you KNOW you’re gonna hate it, WE know you’re gonna hate it, why bother? Why not tell us about something you like?” How many times do I have to say it? Because they keep dragging me back in! Because the stercoraceous parasites that still swarm round the festering clag-ridden arse of mainstream Mercury-nominated British pop eject methane of such a nose-razing pungency I can’t keep quiet! And whether they like it or not, as Leavis intimates in typically astringent style, they and me are in this together, forever.

Of course, no one sent me the Peace record. I don’t know those people no more. So I did what any skint fucker wanting to hear them did, dl’d all the tracks through the magic of listentoyoutube.com and sat back as the data was converted into soundwaves and then I made my first mistake. I read the reviews. Every time I write about pop these days I think, “this could be the last time”. And then I see the shit other people are getting away with and sadly have to strap on the gloves again. Fucking stop lying so I can stop truthing. Please.

I read the NME say that, “As Britain suffers from youth unemployment and economic crisis, our greatest currency is the chime of a golden tune. Peace have delivered 10 of them. So what if they’re a bunch of pirates and not pioneers? This is their time.”

I read The Quietus promise that Peace were “vibrant, singer Harry Koisser assuring ‘We’re gonna live forever, baby’ over cooed, chorused backing vocals and bright, Squirey guitar… you can’t touch Peace, armoured as they are with a few good tunes, youth, fans and happiness. It doesn’t really matter whether you give them a chance or not.”

I noticed plenty of pre-emptive whingeing, a firmly entrenched nagging irritation at the inevitable critiques Peace would attract, the tiresomeness of being unable to square senses & reason. The Quietus review opens by heading such tedious nitpicking off at the pass, pointing out that it’s only those old knackers addicted to their own grumbliness who’d be churlish enough to complain: “Ah, another week, another few hundred words of staunchly defending the right of young men to play guitars and be happy against the massed ranks of miseryphiles”.

For the NME, likewise it’s those gloomy old farts who don’t remember love who are missing out:

“The narrow-minded reckon their experience of history can’t be surpassed; that there’s no point in drawing inspiration from the past because it was better IN THEIR DAY. They murder people’s vibes because they’re buzzkillers. They criticise young people for being unoriginal and lazy because 58 years after Bill Haley And His Comets’ ‘Rock Around The Clock’ charted, idealistic, rebellious teens haven’t evolved beyond simple pleasures like first crushes, guitar strums, pop hooks and leopard print. This disappoints buzzkillers immensely. Buzzkillers will use songs such as Brummie quartet Peace’s ‘Lovesick’ – about reckless abandon and skipping school – to lambast uncomplicated singers like Harry Koisser for cooing ‘I don’t wanna make no sense’ over an updated version of the refrain from The Cure’s ‘Friday I’m In Love’. They’ll demand something more sophisticated – a unique way of saying “I love you”, perhaps. You can safely assume buzzkillers are no longer in love, detest romantic gestures and are cautious of hype bands with hippy names.”

Hell I can’t build fire in your belly. It’s there or it ain’t. It’s irrelevant that my most powerful memory of being young is not being in love but being in hate. I can say it’s simpleton shit to relegate criticism to a role as simply championing music for the effort implied. I can also say that the reassertion of clichés like ‘this is their year’, ‘this is their time’ don’t make those clichés any less clichéd, or any less false (quite an achievement for a cliché to actually not contain one grain of truth). I can also suggest that the militant reason I never moved to London – cos all my friends would be cunts in bands and cunts in PR and other cunting journalists – is now precisely the thing strangling the life out of the music press and the major-label sanctioned pop culture it tries to backslap into our hearts.

But what the hell, I’ll let them enjoy their moment of panic. Nobody gave a fuck when where I worked was trampled into the dirt for the sake of the market leader, I ain’t shedding a tear now I see those market leaders in freefall and panic, that palpable sense of heads-down busy-ness that is always the prelude to an ugly demise. You wanna go down scrabbling in desperation, or go down in righteous flames? They’ve made their ‘choice’. At least for them it is a choice. For those of you wanting to crack in (still you come like sheep to the moon!) and seeing the opportunities dwindling I say Blow The Capital. Nothing is going on there bar the moving of money, the geographical agglomeration of a bourgeoisie ‘creative’ class around a similarly narrow-based political elite , the clarion call to people willing to pay to feel artistic, to waft their bad art back n forth at each other. London’s critical community inhabit merely a theme park for the ‘creative’ (tickets cost your soul and last four years). You, you starlet, you antagonist, you are seriously best off out of it. There’s more to call ‘unoriginal and lazy’ in the written word than the sung note at the moment, and that’s going some.

Stay away from anyone who seeks to defend your generation en masse, who seeks to stick up for you or attack you because of something as happenstance as how long you’ve been here. You don’t need fucking sticking up for on this. Your generation, like every generation before/since, is making appalling decisions from tiny smug blissfully ignorant minds, low expectations and flat-out dreadful taste, and they need poking in the eye with a sharp shit-dipped stick at every opportunity. Anyone, particularly anyone young, seeking to defend you because you’re young is clearly a clueless fucker & those self-appointed defenders of the jejune are myriad and deeply clueless in their fuckery. On Twitter yesterday I read someone much followed, an authoritative cultural voice who I’m pretty sure has always been wrong about everything, talking about Thatcher’s funeral and saying that “no one under 35 even knows who she is so why should anyone care?” When it comes to Peace themselves the reviews similarly have a strange urge to actually forbid critics criticising, a strangely fascistic stance against naysayers seemingly consisting of nothing other than the infantile bleating of people saying “awww you’re MEAN, leave us alone, we’re only bairns”. So much defence of the young. From so many people who are SO SCARED of the young. People with seemingly no actual experience of young people to realise that actually young people frequently want to learn rather than be understood, want to argue rather than be deferred to, want to have their opinions questioned, their idols trashed, their habits unpicked, want to be jabbed in the ribs, poked in the shoulders and told they’re fucking wrong, just like anyone else, just like everyone else, occasionally told what’s what, or at least given something to get their teeth into beyond an endless soppy syrupy nod to their superior knowledge, the scurrying pitiful sound of da meeja warily scuttling around a readership’s feelings.

If there’s one thing you can be sure of, if someone uses youth as an excuse for something, that person, young or old, is massively underestimating young people, is actually denying young people equality by positively discriminating where it’s absolutely not required, tacitly admitting that what they really think is the horrifically conservative idea that YES you do get extra pips on your shoulder for having been here longer than other people. Whereas us old fuckers and plenty of young fuckers (esp. those young people at the wrong end of the class/income scale now used to judge who is allowed to speak) who in 2013 are feeling increasingly alienated from the BPI/IPC/EMAP partyline of progress (the steady reassertion of business muscle after those scarily threatening years of an unbarcoded net) know from bitter experience that age don’t mean SHIT and can NEVER be used as either badge of pride or shame. Young people want to be spoken to across the table, not condescendingly DOWN to by the simplifications and lazy dumbness of those young enough to know better or the embarrassing sticking-up-for-the-kids type shit older pop writers imbibe in to stay the right side of their juniors. Fuck this endless tiptoeing, you’ll fuck your calves up forever. Kids are people. Relax & talk to em. Nothing wrong with music writing being like listening to your mates but why now always those boring boring unfunny mates, never the ones who make you bust a gut and blow yr mind and try harder?

3 Responses to Peace – In Love (Columbia)