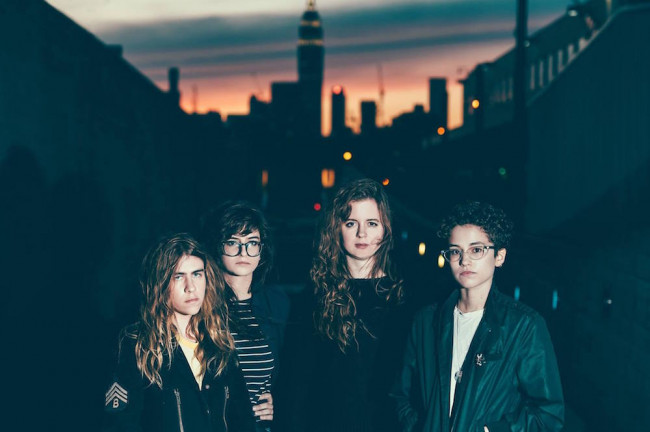 Nots says NO! to everything. We say YES! to Nots.

‘Entertain Me’ is a force of nature. It doesn’t care about you, or me, or any of the other two-thousand people on the beach. It’s right up there with Hookworms’ ‘Away/Towards’. The John Steel Singers’ ‘State of Unrest’. dEUS’ ‘Suds & Soda’, even!

It’s a scene from the Max Max film: a massive truck relentlessly moving through the nuclear desert, with Meredith Lones playing a flamethrower bass guitar, and Alexandra Eastburn driving a motorcycle the size of an organ, exhaust pipes fuming, circling and zigzagging, steering through the chaos – or maybe they are the chaos?

If you watch television while listening to Nots, its cathode ray tube electron gun will spontaneously combust.

Cosmetics are what politicians use to hide their nasty. They say “face-value” but the face is lying, the mouth is lying, the eyes are lying, the television make-up is making it up. But hotter than the stage lights, Nots’ eyes stare you right in the face… and melt it. Nots carries a sledgehammer with them and wherever they go they smash mirrors, leaving only blank reflections. Until the vanity of cosmetics is no more.

Cosmetics are also what women use (are expected to use) to hide themselves. Aesthetics are oppressive so Nots has to be ugly, flushing rainbows down the drain. Cosmetic has no efficient packaging, but only rough edges and spikes and nowhere to hold onto. Like a needle-sharp lipstick and acidic yellow nail polish.

Nots hasn’t been tested on animals and side-effects may include cold hands, dizziness and slight paranoia.

Nots is a negative force. ‘Inherently Low’. They respond to the news with vexation and sarcasm. There are no answers, only problems: Donald Trump growing like a grotesque hot air balloon, Assad’s and Saudi bombs turning Syria and Yemen into the wasted landscape of Mad Max. Nots knows not of love; that’s cosmetic too. Better let Natalie Hoffman scream.

Sometimes Nots has a determined shape, albeit asymmetrical and five-dimensional and incomprehensible. Most of the time Nots is going somewhere, even if it’s only the synth urging the others to hurry up, or the bass marching on its own, not caring about the organ which is then lagging behind and then catching up, running circles around the peloton.

And sometimes Nots loses every trace of a definite form, becoming a pulsating globule with spiky bits, an abhorrent object you wouldn’t dare to look at. That’s when your family asks you to please turn it off.

All post-punk contains traces of the Cold War. The synth in ‘Cold Line’ has got that nuclear angst for example. However, it’s not nuclear proliferation but global warming that is the defining issue of the 21st century. Same prisoner’s dilemma dynamics, same disastrous outcome, just way more probable. I saw this terrifying graph yesterday and the scariest thing is that we’re not scared to death. Nots are here to frighten us like we should be frightened.

Nots wouldn’t be scared but maybe deep down they are.

One Response to NOTS – Cosmetic (Goner): The Impressionistic Approach