‘Not afraid to be vulnerable, and all the stronger for it’ | a review of the new Courtney Love single 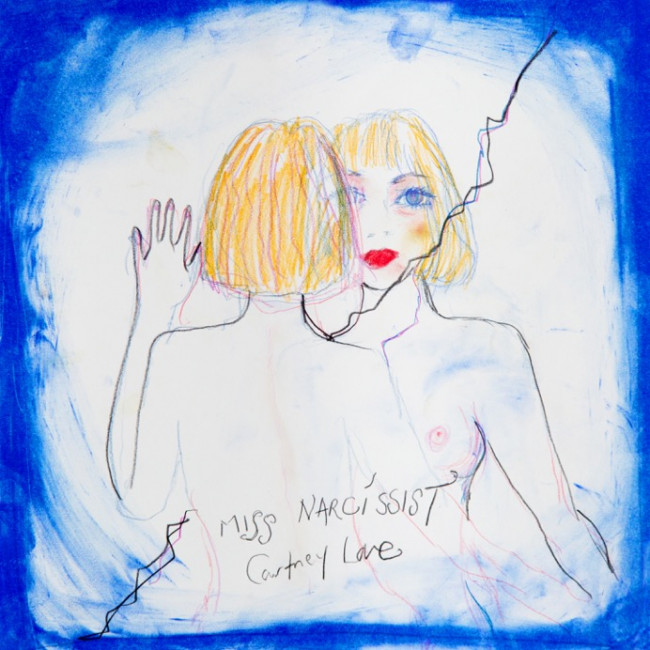 Every now and then, Collapse Board knocks one out of the park.

Last night I responded to a friend request on Facebook and received a sweet thank-you note. So having already checked out my respondent’s Facebook feed and noting she is interested in the new Courtney Love song, I ask her if she would care to write about it. I follow my instincts mostly. Alexis shares two friends with me, one of whom is Bek Moore – one of my TOP AUSTRALIAN PEOPLE. Also, she edits a poetry review, and I like the hat she’s wearing in her profile picture. So I ask her, just warning her off writing it like it’s for the street press, and figuring that if it is truly terrible I don’t need to run it.

Like I say, every now and then, Collapse Board knocks one out of the park.

I was 15 years old when I first heard Live Through This, and immediately it drilled holes (no pun intended) through the rank maelstrom of reality TV shows, disturbing billboards, vapid shopping centres and overproduced banal rock that I encountered everywhere. “You should learn when to go,” Courtney crooned through my shitty little stereo – with just the right amount of danger to make me feel as though her very saliva was dripping menacingly out of the speakers – before launching into a bloodcurdling scream that has stayed with me ever since, so that, at any given moment, such as in department store queues or when forced to listen to Triple J in a mate’s car, I can bring it rolling into the riot space of my brain. “You should learn how to say no,” she snarled at me through those speakers on that day in 2004, and I felt a heady combination of both guilt and excitement. Guilt, because of course I should be saying a big fucking resounding no to everything that felt wrong to me about the world, despite the fact that a lot of other kids seemed okay with it. That harrowing scream seemed to confirm my gut feeling.

I knew then that I could tell the fake plastic world to ‘suck my left one’ as Bikini Kill would encourage a few weeks later. I could tell all of those dollar-hungry normalising forces where to go. And I could learn how to say no. This might seem a basic thing to realise, looking at it a decade later, but when you attended an all-girls Catholic school in a city that was really just an overgrown country town, it was revolutionary. In the same way that the opening words of Patti Smith’s Horses was revolutionary, when it dropped in 1975 and articulated something people had been feeling for years. Where Patti whispered, Courtney shrieked, and to me it was a perfect yin and yang. With records like Horses and Live Through This, I felt like I was being inducted into a secret, raw and fierce society that existed below the tinted sheen, where there was no shame and hesitation, only truth. And the truth was what people were too afraid or too ignorant to say, that the voices in my records said for us all. Every song on Live Through This reeked of blistering truth, and revealed a frontwoman who was unashamed to pick at her scabs and show us her wounds. Courtney had convictions, she had guts, she had rage. She was also not afraid to be vulnerable, and was all the stronger for it. Songs like ‘Asking for It’, ‘Miss World’, ‘Jennifer’s Body’ and ‘Doll Parts’ all tore to pieces populist notions of what a woman was or should be, with a devil-may-care attitude towards both mainstream society and certain jaded parochial male-heavy music press with their insinuation of if-you-want-to-make-it-as-a-woman-in-rock-you-better-write-like-a-man. Courtney’s Fuck You holler on Live Through This is directed as much at them as it is at everyone else who ever doubted that a woman could channel the anger of the disenfranchised (highly ironic, given that the disenfranchised consist of a hell of a lot of women).

Where am I going with all of this? I guess I’m trying to show how important a record Live Through This was to me, and continues to be a stalwart of my rock education through the years. I was having a conversation with a good mate the other day and we both agreed it has not dated at all. It still sounds caustic and relevant and fresh, the spirit of ’77 reborn for the 21st century from the death throes of the 20th, and I hope those guttural screams continue to jolt new generations of confused disillusioned kids, which I have no doubt it will. And I’m sure many of them, like me, will hungrily go looking for more, and discover the unbridled punk fury that is Pretty on the Inside, Hole’s 1991 debut, and find more relief and confirmation. What about post 1994 though, with everything that year entailed? If 1994’s Courtney passed me a torch in my moment of wilderness 10 years later, then I’m afraid I have to say that she did not keep it lit. Celebrity Skin did nothing for me. Sure, there were some alright moments, but I could see it for what it was: Courtney was trying to fit into the shiny cohorts of LA and Hollywood by making a more ‘accessible’ record, an album that perhaps wouldn’t have seemed so bad coming from a half-baked pop punk band, but sounded like a horribly watered down diluted version of her former vision, especially given her punk rock roots. Where was the Courtney who played searing riffs with a punk urgency? The one who covered The Raincoats and Young Marble Giants? In the end it wasn’t her pursuit of an acting career and that whole scene; what hurt was that it was at the cost of her integrity as a punk rocker.

I discovered all this that summer of 2004, just before her solo record America’s Sweetheart came out. It made Celebrity Skin suddenly look much more appealing, let me tell you. The shockingly overproduced generic rock, the lyrics co-written with a pop songwriter with none of the raw truth that seethed within Pretty on the Inside and Live Through This, none of the guts. At the same time Courtney’s public persona through the years has not been a very flattering one to say the least, with her antics regularly splashed on tabloids and over the internet, making it hard for people to take her music seriously. Given that America’s Sweetheart was such a flop, Courtney recorded her 2010 second solo album under the Hole moniker. Hole had always been a collaboration between her and Eric Erlandson, but he was nowhere to be seen on this record – none of Hole’s other members were. She later regretted this decision in interviews, perhaps realising that she had tarred the Hole name. Nobody’s Daughter did not get a second listen from me. It continued the same vein as America’s Sweetheart, and I simply didn’t find anything exciting from either the music or lyrics. Then, after some heavy speculation and rumours regarding a Hole reunion, Courtney dropped a surprise single last year, ‘You know my name’. I gave it a listen. I liked the drum build up and muted chords, the frenetic guitar lines; it sounded more raw and real than anything else she’d produced in the last decade, and the lyrics seemed to be a reflection on her public persona. “Hey, you know my name,” she begins, and I think, sure Courtney, these days for all the wrong reasons, and goes on to say: – “You want the truth” and I think, maybe, just maybe the real Courtney is still there. She howls and screams her way through the track, very reminiscent of the screams that first attracted me to her. But once burned… and then, a couple of days ago, she released a single out of nowhere again, ‘Miss Narcissist’, astonishingly on the indie label run by Nathan from Wavves.

At this stage, you – like me – probably have no expectations. In fact, you’re probably expecting the worst. I know I was. And hey, I was pleasantly surprised. And after a couple more listens, I thought, ‘this is the song people have been waiting for since Live Through This. Or something like it.’ It’s certainly truer to Hole, and to the Courtney Love who blazed onto the alternative scene with her searing determination and punk ethics. And her truth. The lyrics are better than anything she’s written post 1994, inciting Hole nostalgia with its mention of parasites and arteries and paranoia. “Me, me me,” Courtney roars on the chorus, and the simple but bracing drum beat and frenetic lo-fi guitar suit it well. There are no over-the-top effects, no sickly polish. So is Courtney writing about herself? About the world she has created for herself? Is she looking back on 20 years and wondering what the hell she was doing as an artist? Is she ‘Miss Narcissist’? Well, I guess we already know that. But they say recognising your condition is a step towards recovery, and if Courtney’s mining the true depths of herself again and is not afraid to reveal what she sees, like she did 20 years ago, then she might, dare I say it, be cause for excitement again. Will she relight the torch? It remains to be seen, but this song is certainly a step in the right direction.

So is the new Courtney Love song really any good? Uh… I’m going to demure to Alexis and also, our other shared friend Elle Cee who notes “it’s not y’know Live Through This but it’s probably the best song she’s released since 1996 lol”. Now there’s a backhanded compliment if ever I read one.

One Response to ‘Not afraid to be vulnerable, and all the stronger for it’ | a review of the new Courtney Love single