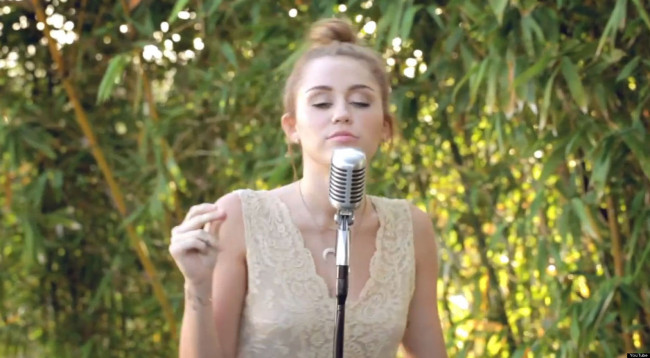 Which of the following performances do you consider more ‘authentic’? Why?

Nirvana – The Man Who Sold The World (MTV Unplugged)

I didn’t quote the following article, but I have other semesters.

…Go back to talking about the Miley Cyrus video. Describe how she introduces it as a song that she used to sing around the house with her little brother and how she misses him while she’s on tour. Describe the comments on the video, all the outraged pissed-off comments, declaiming that she has no right to touch the song, that she doesn’t know crap, that she’s just a manufactured pop puppet. Acknowledge that the people making those comments feel like Nirvana represents something precious that they don’t want to see trivialized, defiled, turned into just another product. Speculate that Nirvana represents all kinds of different important things for them, the right to be different, an example of calling out bullshit, the dream of being in your body wildly smashing bass guitars and crashing into drum sets, the right to be ugly, the right to know yourself as beautiful. Speculate that some of these people still can’t resist wanting to play Nirvana on Guitar Hero, even though sometimes the Kurt avatar looks and moves like Axl Rose. Comment that some of them might not notice this or see why that might be unnerving or even upsetting and that really that’s OK, being as 1991 was a really, really long time ago…
Advice for Everett True on How to Write About Nevermind

Daniel Johnston – The Story Of An Artist

M. Ward – The Story Of An Artist

Amy Winehouse – Back To Black

“Not Now, Not Ever!” (Gillard Misogyny Speech)

In conjunction with the young Australian Voices choir, Davidson created a video/sound piece ‘Not Now, Not Ever!’ based around Gillard’s misogyny speech. The finished work is quite stunning. The composer uses repetition and choral harmonics for emphasis, picking on certain words, ignoring others – sometimes the words are near shouted the way they’re accentuated, sometimes a solitary female lead picks up a wordless lead for a few seconds. You certainly get the impression that Davidson believes in the authenticity of this particular speech, the importance of it. The overall effect is one of… well, complex emotions and perhaps a slight wonder that such a speech could have happened within the stuffy confines of the Australian Parliament. The music itself creates a secondary political narrative separate to the surface narrative taking place in the public eye.
How ‘Julia Gillard’s Misogyny Speech: The Musical’ was created