Mothers, From Up Close 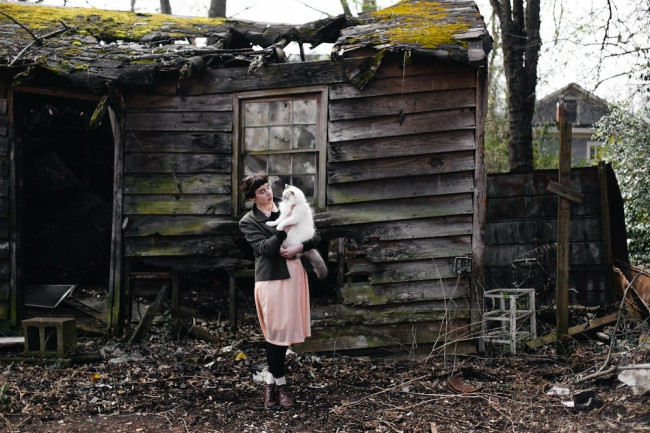 First off, Athens isn’t a magical place. Get that out of your head. J. Crew and Urban Outfitters loom over the main drag of downtown; luxury apartments crowd around the center; boutiques and chain restaurants line the streets. The people that stay there do so purely cos of inertia. Like anywhere else with a pro college football team, our streets are crowded with drunken mobs every Friday night for one third of the year. Does everyone know each other? Pssh, we can point out who isn’t us, and we take orders from each other, and some folk play music with their network of homies – but when two groups of friends sit down outside a bar for a smoke, certain individuals may actually speak to each other for the first time in months, despite frequenting the same coffee shop every morning. And some folk will never sit down with other folk, and that will be how it will be.

Anywho. Perhaps the “myth” of Athens hasn’t catapulted Mothers to the fore of college radio consciousness. But I’d be damned to figure out how else such a sleepy folksy rock band could rise so quickly, unless all these bloggers have just never heard Tim Buckley or Nico before. I’d never even heard of ‘em in the two years that I lived there, and the one year that I wrote reviews for the local liberal-leaning magazine, the Flagpole. But a few key dates in New York, a few press hits in the right places, and a tour slot with Of Montreal can work wonders for anyone, eh.

When You Walk A Long Distance You are Tired. “Oh, what a marvelous stream-of-consciousness title,” the critics are saying. You know what it is? Stupid. Deliberately, intrepidly stupid, like a Hallmark card for your 80-year old grandmother. Kristine Leschper wants us to believe that she can suffer more that most, that she can feel sorrow more than you, just because she can write and sing songs about relationships. As she told an incompetent interviewer on Urban Outfitters’ blog [1], “What I love about the act of performance is that it gives me the opportunity to sort of flirt with line of vulnerability and how much I can let the song attack me before I go off the deep end.”

Flirt with vulnerability. Yeah, that’s rich. That’s like saying Diamond Dave flirted with suicide whenever Van Halen played “Jump”. Being screwed around in a relationship is quite a lush crisis compared to poverty, addiction, or oppression – yet that seems to be the worst that Leschper, or the protagonist in her songs, ever faces. “I gave enough of my time / I lost a dozen friends of mine,” she says on the ballad opener “Too Small For Eyes”. Which, first off, I never understood why the Smiths chose such a drowsy song like “Ring Around The Fountain” to kick off their debut, and I don’t see why Mothers bank on the same trick. But second, you eschew your friends to get closer to this guy that doesn’t even love you – well, doesn’t that make you just a selfish asshole?

I, I, I. Every lyric – despite the flourishes of violins and the periods of stretching and shrinking – only circles back to the you and the I. You are hurting me, I did so much for you, now I’m being hurt. Critics call it “personal”, but I find it so insular that I can’t connect with it at all. And when Leschper approaches a feeling resembling strength, she quickly negates herself. “I buried you in copper mines / never mind, never mind,” she says at the end of “Copper Mines”. As in, “Yeah! Screw you!”, and then, “Sorry, I can’t screw you, I lack the emotional fortitude.” And so it goes for most of When You Walk. Why should we empathize with this character that constantly, willingly resists self-empowerment?

“Well, aren’t you just a bitch,” lesser minds might say at this point. No, no I’m not. I get in funks, and I lament about my ineptitude to close friends. But I don’t go trading in my victimization like it’s high-value currency in the global market. [2] If – and again, I’m pulling from the UO interview – Leschper claims to be concerned about feminist issues, then she owes her audience a favor by showing some fucking backbone in her hypothetical sob stories. For Christ’s sake, she’s even branded her whole online presence with the phrase “Nesting Behavior”, which coincidentally is also her most pathetic song. ”I wear this dress of indifference / and find it quite becoming.” Leschper opts into this moping and sulking, and plays to the conventional submissive roles handed to women by the patriarchy. “I cut out my tongue / seeing yours would speak / for the both of us”, concludes “Lockjaw” – what is that but a complete, voluntary rejection of feminism entirely?

Now, I’ll grant that Mothers, as an outfit, can do this folding and unfolding of the blues and folk quite well. “Hold Your Own Hand”, in particular, floats to something resembling a shoegaze-y waltz before sinking back to a Red House Painters pace. But then I hear “Lockjaw” again, and I think about Jaala’s Hard Hold from last year, and I frown. The muscle! The wheel! The chimera! Not everyone who rejects conventional song forms can rock or intrigue like Jaala, I s’pose, but you can have some fun with yr adventures every now and then instead of just sighing and reciting notes on how to pluck heartstrings.

Grunt. God knows what these folks are like in the flesh. I don’t live in Athens anymore. Apparently Mothers are set to appear at a festival in Atlanta that local venue the Masquerade is offering “payment plans” for, so I doubt I’ll see them there.

Bottom line, though: Scott told me once that every critic should cover his or her scene, first and foremost. At the time, he was referring to the influence that local writers can have on the bands they write about, citing Paul Morley and his effect on Joy Division. And when I eventually did start writing for the Flagpole, I harnessed some of that power. But, working on a global level, I see now that this works both ways – no matter how much we critics listen to or where our work takes us, the bands closest to us get under our skin the most. [3] Me, I’m watching writers who’ve clearly never been to Athens fall hook, line and sinker for the small town utopia story, and eating up Leschper’s words about donning sadness like a dress, and I’ve had enough. This ends now, Mothers. I call your bluff.

[1] – I say “incompetent”, because the writer never bothered to label which band each of the interviewees came from. Thus, all the women in the piece are framed as solitary artists, in command of their entire output – which is true for some like Erin Lovett and her Four Eyes project, but definitely not for Leschper. She also asks dreadfully banal questions like “what’s a GREAT day in Athens for you?” and “Do you think your fashion style matches your music style?” Also, the peasant boy fashion shoot that heads this article is from that post. The moral offense of this glamorizing constitutes another story entirely.

[2] Andrew Falkous wrote some choice words about capitalizing on yr own misery on the new Future of the Left LP, which seem relevant here: “Why not commission a picture of your own tits and put it on display in your mother’s care home?” (I’ll be looking for relevant places to insert lines from that LP all month, prolly)

Related link:
Mothers, From A Distance