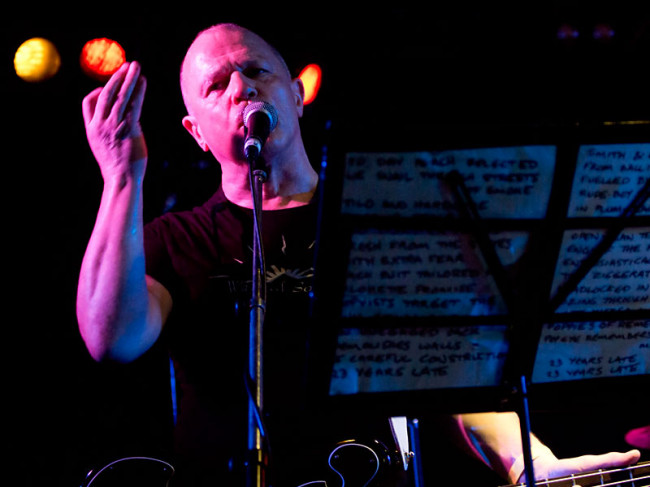 The doors are closed when I arrive.  This is because the gig is on the other side of town.  I’ve wrongly assumed Wire would play at The Hi Fi, a larger, air-conditioned venue that’s hosted a series of older/reformed bands lately.  Instead they are playing The Zoo, a smaller, hotter venue that tends a little more towards the local.  It’s a comfortable fit for tonight’s crowd and performance.

Another surprise is the uncommonly thoughtful choice of local supports.  I make the end of Multiple Man, twin brothers behind twin banks of equipment knocking out stern, industrial-edged synth pop.  Stripped of the de riguer tape fuzz of their recordings, the beats are closer to pleasantly punishing and the vocals have character.  They seem to have songs and I’m keen to hear more.

Per Purpose singer Glen Schenau kindly thanks the promoter for booking “proper bands… to support a footnote like Wire”.  If this is intended as the (weird) dig it sounds like, it’s a bold call when your own band’s using more footnotes than it’s making.  Not for want of originality.  He sounds less like Gareth Liddiard now, having lowered his still-incomprehensible Strine-whine and pared back his guitar slashing.  And a bit of attitude’s good, of course.  This is the best I’ve seen these guys and I buy last year’s album, but they seem to have deconstructed further – removed more, keeping a churning bass-drums core around which curl acrid wisps of guitar, the voice booming rudely over the lot.  A bit of prop-play with a ball of string etc adds charm (footnote: three decades ago, Wire performed a gig in which they held up oranges until they were bottled off the stage).

Reviewed, it seemed as if someone were watching over it.  So what will Wire be tonight: arty middle finger?  Hit parade?  New album in full?  Looking around, I imagine a survey of the audience’s wishes turning up each of these options.  Fifty Pound Man and 50 lb woman rub shoulders with fifty-year-old man.  Right in front of me there’s a Swampy reunion.

Before it was as if response were based on fact.  The chatter is gradually subsumed by a rising drone which peaks when Wire take the stage and start ‘Marooned’, a second-album classic which, being a ditty about lighting a fire on a melting iceberg, has actually accumulated relevance since 1978.  ’23 Years Too Late’ (2008), alternating between Graham Lewis’s slow, spoken word verses and Colin Newman’s frenetically thrashing choruses, shows off both their formal nous and their rock band brawn.  For a rock band they are.  The occasional electronic beats and textures of their album work are jettisoned, most noticeably on older numbers (‘Another The Letter’, the once-drum-machined ‘Drill’), leaving a powerfully focused but somewhat monochrome live unit.  Where it’s now expected of young bands to do anything but rock, Wire seem to be exhaustively exploring its possibilities, physically as well as conceptually.  Of course, one idea per song can be thrilling when you have one song per minute (see Pink Flag, 1977); stretched over five minutes it’s hit or miss.  This becomes the story of the set.  A few recent and brand new songs will drag and blur (‘Doubles and Trebles’, ‘Blogging Like Jesus’, ‘Smash’), despite the no-doubt great lyrics Newman reads off his mounted iPad.  Then something like ‘Adore Your Island’ (from latest album Change Becomes Us) will break through and surprise: Guided By Voices-esque rock gestures, sudden tempo change, Who’s Next noodling.  As unlikely as it sounds, GBV are a handy point of comparison given Wire’s prolific but pretty consistent, subtle variations on previous musical themes (‘As We Go’ is vintage melodic Newman; ‘Please Take’ is Lewis’s equivalent; etc).  It seems these process-driven artists are going to follow their processes wherever they go and, as with GBV, there’s a core of fans who are more than happy with this.

Providing, deciding, it was soon there.  It’s when they play the most recognisable song of the night, ‘Map Ref 41N 93W’, that this audience lights up.  At least, the old-schooler down the front in a fractal shirt lights up (literally), quickly surprised by how difficult it is to find another taker (the youth of today!) before he gets down to some serious pogoing.  What could be a mother and daughter bop their heads in time.  While the rest of the set isn’t exactly a hit parade, happy drunks continue to lay siege to my shoes, apparently won over by the sheer energy from the stage.  Touring guitarist Matt Simms, who fills out the original lineup of Newman, Lewis and Robert Grey (nee Gotobed), makes his fair share of ear-bleeding noise as the final run of songs pile on the volume and extremes of tempo.  Newie ‘Harpooned’ is a lumbering beast while encores ‘Comet’ and ‘Spent’ are the aural equivalent of cranking the lights in the crowd’s eyes at the end of the show.

Squared to it, faced to it, it was not there.  So, then.  All of the above.  None of the above.  If I have to give one answer, it was perhaps the most unexpected thing of all: a good rock show.  Of course, there’s never one answer.  This is your correspondent, running out of tape.