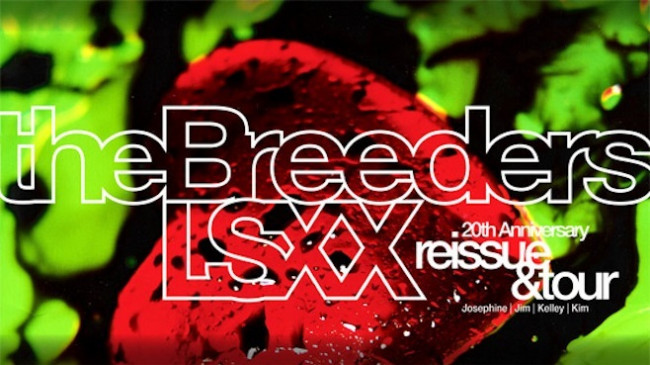 The power of twins, the deepest and closest of possible human connections.

The Breeders are on tour celebrating the 20th anniversary of their best-selling album Last Splash with record’s original line-up. Let’s go ahead and put it right here at the top of the article for easy reference:

It’s never been my favorite Breeders album — Pod wins by a landslide. Maybe because of my personal circumstances when it came out (I was homeless at the time, a story already covered in detail a year-and-a-half ago) LS wasn’t angry enough for me at the time. Too whimsical, too vague, too unfocused, too sunny.

After seeing the show, I’m able to admit that I was wrong about all of these things. Maybe not wrong exactly, but let’s just say that a lack of visceral rage in a work of art does not mean that art is deficient. Sometimes the deficiency is in the listener. And god knows I had my share of them around that time.

I usually get it wrong when it comes to reunion tours. Either I’m too cynical and don’t bother seeing a show that everyone afterwards tells me is amazing (Gang Of Four, I’m thinking of you), or I get overly sentimental and talk myself into seeing a show that turns out to be totally mailed-in (what’s up, Soft Boys?). But there was no real question whether I’d go see The Breeders — especially with fellow CB writers Brigette Herron and Mike Turner coming along, plus members of Tunabunny and Muuy Biien. Shit, at times it seemed like there were more Athens people there than Atlanta people.

Deerhunter hopped on the bill at the last minute as an act of selflessness — they probably could have filled this venue on their own given enough notice. Mike was seriously bummed to have to stand through their set, but I liked their new album so I was okay with it, though we both agreed that an annoying Bradford Cox spiel about how he was the biggest Breeders fan in the world was inevitable.

A few songs in we got a story about how Bradford’s mom bought him LS for his 11th birthday (which was exactly 20 years ago — HAPPY BIRTHDAY BRAD!), which was really sweet. Then he told us how a year later he went and bought Sonic Youth’s Washing Machine. Because he’s just that cool. Anyway, there’s something endearing about all this, like he can’t help himself. So I’m rolling my eyes when I write this, not telling him to eat shit. Even when he tells us LS is his favorite album of all time, and I’m thinking wait, I thought Pylon’s Gyrate was your favorite album of all time. Or was that the first B-52’s album? Does he know what the phrase “of all time” means?, I still find it kind of funny. Unlike Mike who is sending angry text messages to us on his phone.

So in person, Deerhunter’s pretty much your standard polished professional rock band. They’ve been doing this for 10 years now, and for better or worse it shows. They can be catchy, or they can be experimental, but they seem incapable of being both at the same time. Or more specifically, they can’t combine these impulses without losing something in the process. The sum is less than its parts. 2 +2 = 3. Anyway, Deerhunter’s experimental tendencies manifest them live as everyone turning up their delay pedals and making five-minute twinkle noises at the end of a song. It’s pretty enough the first couple of times they do it, but it gets old real quick. So when Bradford tells us again how much he “can’t wait to see The Breeders” while tuning up for yet another song, I can’t help shouting “Apparently you can!” back at him.

Anyway, eventually they finish. Jesse from Tbunny leans over and tells me he liked the little guy’s songs better, referring to the two songs led by other Deerhunter guitarist Lockhart. (Note: there’s a third guitarist who is more or less inaudible and looks like Michael Cera only sadder — if such a thing is possible. When he switches over to tambourine for one song he becomes the saddest tambourine player I’ve ever seen. Dude looks like he’s just about to start bawling.)

I can’t help myself. There’s something about Deerhunter that makes you want to pick on them, but let’s give them credit — Deerhunter are one of the good guys. Bradford even helped Kim find a sampler and a mini-moog to replicate the eerie pulses in ‘Invisible Man’.

Speaking of that song, now would be a good time to listen closely and appreciate all the different off-kilter counter-melodies — especially that violin.

So the show starts and they come walking out and waving in a way that’s so simultaneously dorky and cool that it makes both those terms absolutely meaningless (which it turns out is part of The Breeders genius and why we should worship them, but I’m getting ahead of myself).

They play the album in order, starting with ‘New Year’, and I can’t begin to describe how bright it sounds, how the music hits your body when they go into the thrashy part and we instantly learn that Kelly Deal has spent the past 20 years becoming a fearlessly passionate guitar player. It may be due to standard headliner/support sound guy protocol, but The Breeders sound like a charismatic jet engine taking off after the Deerhunter slog.

I use the term “casual genius” as the highest compliment, an antidote to the grim, tortured po-faced modernist male. The Breeders show that one can be brilliant and still be approachable, still smile, still not take one’s self too seriously even while crafting art that is strikingly original. The secret to LS’s brilliance lies in its tension and paradox (even the title, Last Splash, blends fatality and enthusiasm). It tightropes its way between attraction & repulsion, joy & despair, darkness & light. Even a song as seemingly straightforward as ‘Do You Love Me Now?’ ricochets between questions & demands, unable to settle in one train of thought.

Enthusiastic songs about stasis, agitated songs about wanting to get along, heartbreaking melody mixed with ungodly noise, LS is a series of schisms: Male/female, hetero/non-hetero, love/hate, shallow/deep, excited/despondent, kinetic/paralyzed. It goes on and on. And seeing the band in person only heightens the effect. It’s goofy and silly one moment, raging the next.

And let’s just talk about a line like “Idiots & palsied/Blink in corners we leave”. Kim Deal may be one of the finest poets of the late 20th Century and fuck anyone who never noticed because of their own inbuilt conventional wisdoms. They parrot received ideas as their own in the hope that someone will give them a cracker and I won’t rest until they’ve been plucked and served over a bed of fried plantains.

After they finish playing the album, the band takes a short break before returning to play some B-sides and some stuff from Safari and Pod. And when the band kicks into the loud part of ‘Safari’ or Kim screams over and over in a very odd meter “I’m in the Lime House, I am/In the Lime House” there’s not a single damn goofy or silly thing about it. And the grain in her voice when she screams “Tarrr-BABY!” makes me think of planes crashing and babies dying and all the awful things in the world, and it occurs to me that this may be the greatest band ever. That 300 years from now, when women and men rule the planet in harmonic co-existence, people will look back on The Breeders, and their album Last Splash in particular, as harbingers of our triumph, evolutionary signposts on our road to enlightenment, and the only thing that kept me realizing it up until now were my own personal hang-ups and blindness.

Then the song ends. And they all make funny faces at each other.

This is much more than a band; this is a lesson in how to be human.

It still seems almost inconceivably strange that this album went platinum — and incredibly comforting, a reason to be hopeful. Sometimes the damndest things happen on this planet. That in itself is a reason to keep trying, to keep banging on the closed door until it opens.

I’m telling you, one day they’re going to build statues of The Breeders. And if the band members are still around, they’ll be the first to knock them over — because they know what’s important. And so should you.

I’m still not sure I’ve said enough about how great a show this was.